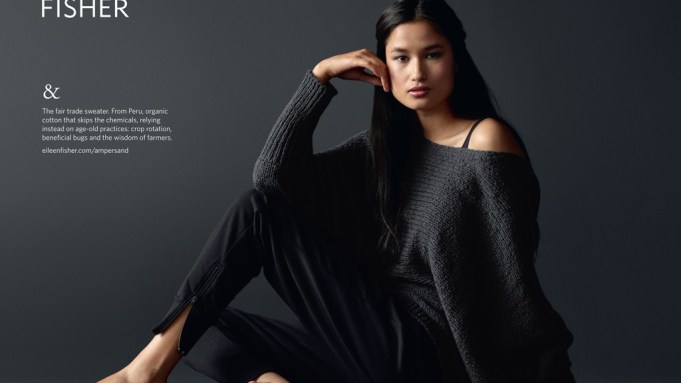 Eileen Fisher’s clothing has always had a story to tell, and now the company is getting the word out through its fall ad campaign.

Fifty percent of its print ads will carry an ampersand symbol, which signals that the brand has more information about the sustainable choices behind the clothing in the images. In past campaigns, Fisher featured simple and graphic images, without copy. Fisher believes that the graphic symbol enables the firm to call out the sustainable efforts it is making, such as a partnership with an artisan in Spain who dyes glovelettes using ingredients from her garden, as well as using silks that meet the strict and holistic Bluesign standard.

One ad, for example, shows a model wearing an outfit and below the ampersand is the following description: “The fair-trade sweater. From Peru, organic cotton that skips the chemicals, relying instead on age-old practices: crop rotation, beneficial bugs and the wisdom of farmers.” The ad refers customers to the dedicated microsite, eileenfisher.com/ampersand, for more information.

At present, 25 percent of Fisher’s collection is sustainable, including using fair-trade organic cotton knits; silks that are Bluesign certified for eco dyeing, and organic, sustainable and recycled fibers and dye processes. Some 800,000 units are made in New York City. The company supports traditional crafts and cultures throughout the world.

The ampersand campaign will appear in magazines such as Vogue, InStyle, Vanity Fair and The New York Times’ Thursday and Sunday Style sections and the Magazine, as well as Dwell, Fast Company and the New Yorker. Supplementing the print ads will be a digital campaign that will appear on Macy’s Vision Billboard, a full-motion digital video billboard that wraps around the corner of 34th Street and Seventh Avenue, in September; the microsite, eileenfisher.com/ampersand with in-depth articles, features and videos describing their sustainable initiatives, an in-store newspaper that will enable customers to read articles and an interview with Fisher on “Business as a Movement,” and various activities on social media platforms such as Twitter and Facebook.

The idea for the multifaceted campaign came from Fisher’s creative agency, Bone & Black, with whom they partner on creative direction for the company. The photographer is Martin Bone, creative director of Bone & Black. The models featured in the campaign are Natalia Costa, Cerelina Proesl, Jihae Kim and Varsha Thapa.

Fisher will spend less than $2 million on its media budget for fall, which is a double-digit increase from last fall’s spend. The campaign will also run in London, where Eileen Fisher has two stores. The budget doesn’t include the microsite or in-store newspaper.

The company plans an event on Sept. 22 at all 58 Eileen Fisher stores. It will highlight the brand’s mission to empower women and girls, and the company will donate 10 percent of proceeds to community non-profits that support leadership in women and girls. Ongoing efforts also include hangtags that have a behind-the-label checklist so customers can see whether a garment has sustainable fibers, certified dyeing or a Made in USA label, as well as in-store signage and visual window displays.