According to the 2019 Altagamma Social Luxury Index, Italian luxury brands should strengthen their presence on such platforms as TikTok, Douyin and Little Red Book, communicating Made in Italy values.

MILAN — As the luxury sector eyes recovery in a post-COVID-19 scenario, social media platforms, including emerging networks such as TikTok and Little Red Book, as well as the ability to convey strong messages about the value of Made in Italy, are seen key for Italian luxury companies.

These were the main takeaways from the second edition of the Altagamma Social Luxury Index, a study on social network usage by luxury brands commissioned by Altagamma and realized in partnership with Accenture Interactive.

Assessing a panel of 35 international digital channels, including social networks, blogs and forums, the research highlighted that in 2019 Altagamma’s associated companies, which include 108 Made in Italy brands across fashion, design, jewelry, hospitality and more, have strengthened their presence on “regional” social media such as Chinese WeChat, Weibo and Russia-based VK, to target those markets.

A lot of work has to be done, though.

The study spotlighted a lack of presence on emerging social media platforms, including TikTok, Douyin and Little Red Book, all dubbed instrumental in reaching young Asian consumers, which — according to a recent study conducted by the Italian luxury goods association in collaboration with Bain & Co. — will represent a booster for the luxury goods market, expected to reach sales of between 320 billion and 330 billion in 2025.

For instance, according to the Social Luxury Index, the TikTok app has seen a surge in downloads of 68 percent in 2019 compared to the previous year, especially among people under 35 which account for 70 percent of the active users. Similarly, the number of users on Little Red Book — the Chinese social media often described as a “shoppable Instagram” and originally a place where users shared content about foreign fashion and beauty brands that they had no access to in China — has skyrocketed 200 percent between 2018 and 2019, with 84 percent of adopters under 35, while two thirds of the audience of livestreaming platform Twitch is composed of Millennials, 57 percent of which hailing from Asian countries.

“This second edition of the Altagamma Social Luxury Index contains interesting insights that can help guide the marketing strategies of Italy’s luxury brands, one being the exponential growth of new platforms such as TikTok and Little Red Book, which represent an important gateway to the Asian markets and the youngest age groups,” commented Alessandro Zanotti, managing director and head of marketing advisory at Accenture Interactive. “Our analysis of the data gathered highlights the potential business that can be generated by carefully defining brand strategies, above all in today’s complex, delicate scenario,” he said.

“Communication on social media is one of the most important tools in the brands’ relationships with their target audience, but it is a constantly changing scenario which presents profound differences between the western world and Asia,” added Stefania Lazzaroni, Altagamma’s general manager.

The vast majority of those conversations pivoted on four topics, already seen in the 2018 study, including “glocality,” such as the provenance of the products; luxury lifestyle; events and heritage, while sustainability, customization, limited editions and craftsmanship emerged as new pillars. 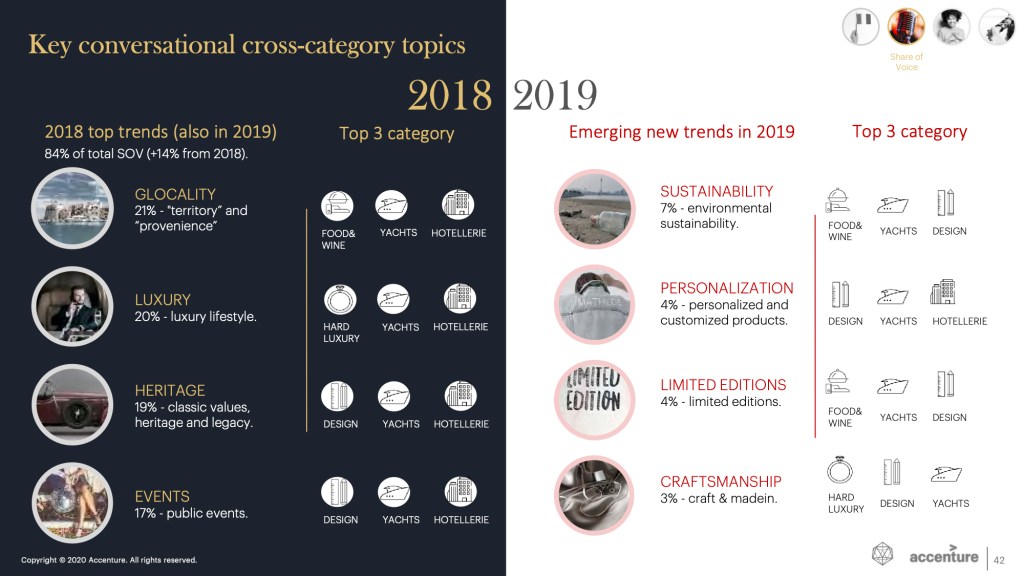 To this end, the research described Made in Italy as a set of values that international customers and social media users are particularly keen on and urged luxury companies to leverage those assets on their social media, especially to support the sector’s relaunch in the aftermath of the COVID-19 emergency.

The Accenture Interactive study also traced the social media scenario during the January to May period, aiming to understand how the pandemic had impacted the online presence of Altagamma’s brands. Although spontaneous conversations about associate brands on social media channels grew 28 percent compared to the same period last year spurred by events’ cancellations, charity initiatives and restart programs, the study found out that brands were expected to engage in the conversations with their followers; show empathy to strengthen the sense of community; avoid explicit, “in-your-face” sales campaigns and customize their communication in tune with what was happening in each country.