The gym's new ad campaign zeroes in on well-chiseled women and men in provocative nonathletic scenarios. 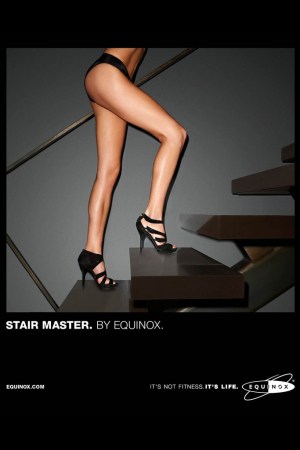 EQUINOX’S CASE STUDY: Equinox’s new ad campaign zeroes in on well-chiseled women and men in provocative nonathletic scenarios. With that in mind, it is no real shocker that Terry Richardson is the photographer behind those sultry images. This marks the third consecutive season that the lensman has shot the “By Equinox” campaign.

The latest installment features an assortment of Equinox-powered bodies pictured at play in and around the Case Study House #22 (aka “the Stahl House”) in the Hollywood Hills. Needless to say, skin is in as evidenced by a female model climbing a set of stairs in stilettos and black underwear with the tag line “Stair Master. By Equinox.” Another ad features a man reclining on a bed with a woman in a black sheer minidress standing above him and a video camera positioned nearby with the tag line, “Action. By Equinox.” The 58-club operation is playing off the company’s mantra, “It’s Not Fitness. It’s Life.”

In the weeks ahead, the print, digital and outdoor platforms will break in New York, Los Angeles, London, Toronto, San Francisco, Chicago, Dallas, Boston, Miami, and Washington, D.C. Equinox executives declined to comment on the media buy, but noted that controversy is Richardson’s calling card.

However iconic Pierre Koenig helped to make the Stahl House, its heritage seems to be in step with Equinox’s democratic approach to fashion and fitness. The three children of C.H. “Buck” Stahl (who bought the land the house now sits on for a handshake and $13,500) grew up roller-skating in a house with concrete floors and made-for-movie views.

And while Richardson was born in New York City, his Equinox assignment took him back not far from Hollywood High School where he was once a student.

Next month his first solo show in Los Angeles, “Terrywood,” will bow at the Ohwow gallery. Until then, a documentary about Lady Gaga and other projects will keep him busy.