Ready for Anything: Vendors Prepare for the Season

As the spring edition of ENK International’s Fashion Coterie trade show approaches, exhibitors are hoping to reel buyers in with versatile pieces. 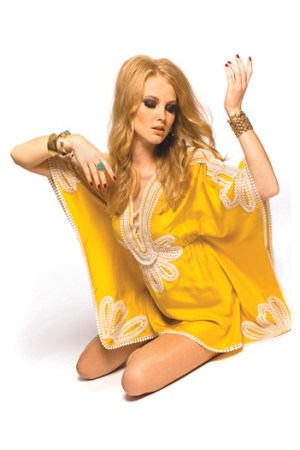 The show, which runs from Sept. 22 to 24 at the Jacob K. Javits Convention Center, marks the first time in years that all exhibitors will be under one roof. Because of ongoing construction at the Show Piers, the event is usually split between the Piers and the Javits Center. This season, however, the convention center offered ENK more space, allowing enough room for the well-over-1,000 exhibitors who will be showcasing their collections at Coterie.

With such a large selection of vendors and the economy still in recession, retailers are expected to be pickier than ever when placing their orders. That, exhibitors said, is something for which they are prepared.

After just three years in business, Dallin Chase owner and designer Jason Cauchi said he thought the coming edition of Coterie would be the appropriate time to participate in the show for the first time.

“We started Dallin Chase with just a handful of dresses three years ago,” he explained. “Since then we have grown slowly to include tops, skirts, shorts, jackets, leather and pants. I think we will always be known for our easy dresses, but I hope that, with this show, we will get to share the entire scope of the brand on a bigger stage.”

Cauchi also said that, since the economic downturn has forced a great number of stores into closing, he thinks Coterie will allow him to open his New York-based line to some new stores.

“It has been very difficult to see relationships with boutiques end because they were unable to stay open,” he said. “It also was a concern for how we would position ourselves to grow the brand. Fortunately, we slowly began to see that our existing boutiques began to buy deeper, and reorders this summer have really been encouraging. We also have been able to expand our reach with existing and new department stores.”

At Coterie, Cauchi said he will have a large selection of items available, from a charcoal lamb tuxedo jacket to an embellished indigo biker jacket in washed goat. There’s also a new key dress in the line — a strapless number with fitted torso and full skirt. There are soft washed jacquard cotton tops, silk doupioni and distressed denim dresses. The Dallin Chase collection wholesales from $42 to $280.

Also new to the Coterie show will be New York-based Resin, a new denim line from the makers of Paper Denim & Cloth.

“Our goal is to focus on the top specialty stores throughout the country,” said Resin founder Chris Gilbert. “We are less concerned at this point with the volume than the quality of the accounts we sell.”

With that said, Gilbert said because of the economic downturn, he has been more focused on how to present the collection — focusing on quality and competitive price points. That, he said, positions the brand well for Coterie.

“With customers spending fewer dollars, it is important for us to offer tangible reasons to purchase our product over others in our category,” he said.

So for spring, Gilbert said there will be an array of options at the Resin booth — a skinny, bi-stretch jeans style available in new washes such as butterscotch, which uses subtle dyes and hand-applied painted color resulting in softer shades. There’s also a skinny flare style that merges Resin’s core skinny fit with a wider leg opening, making it easy to slide over heels or boots. There also will be a large selection of shorts available, from a skinny style that falls just below the knee to a true short short.

The Resin denim collection wholesales from $58 to $76.

Another collection heading to Coterie for the first time will be Zimmermann. While the Australian contemporary label has been in business for 17 years, brand director Simone Zimmermann said this is the right time to come to the show.

While the label has an extensive range of sportswear and a large swim collection, Zimmermann said there are three key dresses in the spring line that she hopes will be hits at Coterie — a silk georgette floral printed tank, which wholesales for $215; a silk georgette maxidress for $172, and a rayon tapered dress for $152. Overall, Zimmermann apparel wholesales from $75 to $400, and the swim line ranges from $65 to $200.

For Berlin-based Strenesse Blue, the brand will enter its second consecutive Coterie show armed with a new creative vision and pricing strategy aimed at the U.S. market.

“The [economic] crisis has caused enormous uncertainty,” said Luca Strehle, head of Strenesse Blue. “Every crisis forces us to make decisions, to say yes or no. But there are already signs that the situation has brought movement into many areas that had become stuck in a rut. The old principle of ‘but we’ve always done it that way’ no longer cuts the ice. Now everyone is compelled to change their way of thinking, and that’s a good thing. Many people regarded Strenesse as hopelessly behind the times because we always prioritized quality, instead of aiming for short-term success with clothes that aped the latest trends. But thanks to our approach, we have gained customers that are not so quick to bail out.”

As a result, the company has seen positive numbers, he said, so far experiencing a 60 percent increase just with the brand’s resort 2010 collection sales.

“Despite the odds, we had a sustainable increase compared to last year,” Strehle said. “The first results for the main spring 2010 [collection] are just as positive. A strong Coterie could help us reach some very positive results. Another encouraging factor for us is the excellent sell-through of fall 2009 so far. Requests for reorders reach us daily.”

That said, Viktoria Strehle, Luca’s sister and creative director of Strenesse Blue, said the brand will showcase a range of new items at the show from the spring line.

These include relaxed-fit novelty jackets, painted silk tank dresses in colors running from peach to pink and draped jersey tops meant to work well with jeans. The Strenesse Blue collection wholesales from $39 to $234.

For Prairie New York, which has been participating in Coterie since 2004, the show has become an important place to gather orders from retailers, and as importantly, to obtain feedback. That has been key in planning for the show during this recession.

“We didn’t play it safe by putting out an easy, safe little black dress. Instead we gave customers something special — ruffle, trim, luxurious fabrics,” said Danielle Shriber, owner and designer of Prairie New York. “One way we did change, however, was that we projected much closer to sales and kept our inventory way down. We didn’t overcut as much, which had pros and cons, considering our summer delivery was one of our strongest yet. By not cutting extra pieces, we may have missed out on reorders, but it was a chance we had to take due to projection dollars being so tight.”

“Key items will be our first ruffle trenchcoat in a cotton canvas with cotton contrast piping,” she explained. “A fresh vision will be the long dress — a ‘new length in flexible dressing,’ as we like to call it. You’ll see this in
our Modal jersey with the Prairie NY cornerstone, embellished beaded and crystal necklines. We have decided to offer our day-to-night look by way of dresses that reach the floor and truly embody versatility. Alternatives to the typical event dress are taken from our best bodies — definitely a new concept for us. We are already working with specialty stores to create exclusives along this idea, W Hotels Boutiques among the most exciting.”

The Prairie New York collection wholesales from $69 to $150.

Contemporary sportswear brand Parker will be at Coterie for the third time, hoping for continued growth with international and domestic stores.

“Parker was launched just as the economic crisis began one year ago,” said Laurieanne Gilner, co-founder and co-designer of Parker, along with Derek Farrar. “As a newcomer, it was more about finding the right brand position with a really distinctive edge to enter the market. Our recipe for success has been [to have an] attainable price point, combined with high-quality fabrics, compelling prints and excellent fit.” She added that Parker is expanding with new fabrics and novelty items.

Farrar said he is starting to see signs of a turnaround. “We do believe that things at retail are starting to turn the corner, overall. One recent indication was just last month, when we were presenting resort,” he said. “Historically, resort is not a high-volume period for retail. However, we noticed that the trade shows were busy and everyone was writing orders. This is a great sign, and we expect that spring will prove to be even better.”

For Coterie, Farrar said Parker will have a focused sportswear collection consisting of printed silk blouses, pants and dresses accented with sequins and lace. But he added that dresses have been retailing well so far for the brand, and he expects that to continue for spring. The Parker collection wholesales from $68 to $138.

Designer Yoana Baraschi has been going to Coterie since she started her business in 2003 and finds the show a key component in the growth of the company. Overall, Baraschi said her line has managed to grow in various ways.

“It is strange to say, but we have hired new people and increased the size of our sample room,” she said. “We have diversified by introducing a knitwear collection named Original Knitwear by Yoana Baraschi. This collection has a broader appeal — being trend-oriented at a lower price point while maintaining the special touch of the main Yoana Baraschi brand.”

The knitwear line retails for less than $200.” Overall, Baraschi said she lowered wholesale prices by anywhere from 15 to 30 percent, bringing the range to between $89 and $199. She said she was able to do this by “paying increased attention to fabric prices and yields and creating partnerships with our factories, including our New York contractors, as we maintain our commitment to produce a portion of the collection locally in the city. Also, researching and finding fabrics made in U.S. mills — and believe me, it is not easy.”

At the show, Baraschi said she will have a large selection of items, including ultrabright printed silk caftans with gold accents; chiffon party and cocktail dresses in bright coral, jade, pink, blue and lime; tunics and minidresses in bold yellows, oranges, corals and navy accented with colorful beadwork, embroidered chains and bright sequins, and blazers and body-conscious stretch dresses in neon colors.