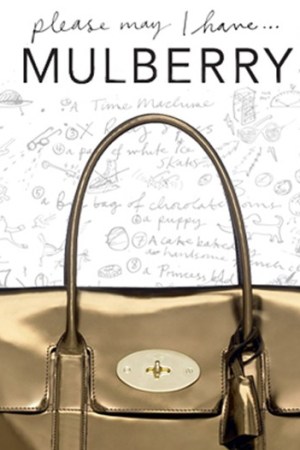 LONDON — Not long ago, the British luxury accessories brand Mulberry treated some of its most committed bloggers to Champagne and goodie bags during a trip to Bicester Village, the cluster of upscale designer outlets outside London.

This month, in the run-up to Christmas, Britain’s Topshop will unveil an online card game, in which everyone who plays will be a winner, snapping up prizes ranging from 10 percent discounts to a year’s supply of Topshop shoes.

This story first appeared in the November 12, 2008 issue of WWD. Subscribe Today.

This past summer, Cartier fans were able to download 12 free, original music tracks as part of a MySpace promotion for the fine jeweler’s first annual Love Day, June 19, when a portion of all proceeds from Cartier’s Love collection were donated to charities.

These brands are part of a growing group: Europe’s fashion and luxury goods companies that are wooing bloggers and infiltrating social networking sites to entice a new breed of customer, better leverage their ad budgets and ultimately sell more products.

Long considered laggards when it comes to online courtship — especially compared with counterparts in the mobile phone, automobile, and music sectors — fashion and luxury houses are waking up to the benefits of low-cost, high-impact marketing in the viral buzz of social networks. “Online marketing is the most powerful way we can reach our younger customer,” said Sheena Sauvaire, Topshop’s head of marketing. “To be perfectly honest, we have to be using this medium.”

Bloggers who post about Mulberry bags at Web destinations such as The Purse Forum, a site boasting more than 100,000 members, are being closely watched by the premium accessories player, for instance. “If there’s any chatter regarding the pricing or country of origin of a new bag, we’ll send the blogger an explanation — like how much the raw materials cost,” said Nick Roberts, retail director at Mulberry.

The company’s ads launched this month on the upscale social networking site ASmallWorld.com, hawking the handbag brand’s new U.S. Web site, mark Mulberry’s “first foray into the social networking world,” Roberts noted. “These people can be more powerful than paid-for ads, and we need to harness that power. You are in touch with the end user.”

Mulberry’s online initiatives cost about one-third the price of a glossy magazine ad, are “more cost-effective and far more measurable,” he maintained without specifying further.

Efforts like these could be well timed. “People have always talked to their friends and family about what they buy; now they are beginning to trust people they have never met,” Tom Smith, head of consumer futures for Europe, Middle East and Africa at Universal McCann, said. “The fundamental shift we are seeing is where people are beginning to look first for endorsement.”

According to “When Did We Start Trusting Strangers?” a report by Universal McCann issued in September, Internet users will increasingly turn to one another — rather than the press or celebrity endorsements — for shopping advice. The global agency found more than 45 percent of the 17,000 Internet users in the 29 countries it contacted had provided an opinion online about new clothes or footwear, while about one-third of the surfers searched for such comments by wired consumers about products they had bought or used.

Less a quick fix in tough times than a long-term effort to build a community of customers, for some, marketing via social networks means relying on a medium that is largely beyond a marketer’s control. “The whole area is a minefield,” observed Guy Salter, deputy chairman at Walpole, which staged a Luxury eBusiness Forum in London last month. Nonetheless, Roberts said, “You can see immediately if it’s working or not.”

The lure of cyber-advice is particularly strong in some emerging markets.

“The Chinese consumer is starving for luxury goods, but a lot of [this population] is in second- and third-tier cities” where they won’t necessarily see print ads or be around brand-name stores,” said the Shanghai-based Aline Conus, founder of Yangjiu.com, an Internet trading company. “My advice to companies? Get a blog,” she told the Walpole eBusiness forum.

Topshop well knows the power of bloggers. An unofficial Topshop page on MySpace has been sparking about 20 percent of the visitors to topshop.com, according to Sauvaire. The company provides Topshop’s blogger there with details of company events and news. It’s one of the brand’s newest attempts to stir interest via social networking sites, a tactic the retailer first tried three years ago.

Topshop’s idea has been to take “baby steps” in order to gain credibility in the long term. “These consumers are very brand cynical — unless you are adding value, they’re not interested,” Sauvaire said of 16- to 18-year-old shoppers.

Three years ago, the digital budget at Cartier was zero, according to Corinne Delattre, international communications director. Today, the jewelry and accessories brand believes a presence on social networking sites is a necessity. “We wanted to reach a new kind of customer, and show them another angle of Cartier,” Delattre said, pointing out that just 8,000 people were able to join the cyber community, even though the site received 400,000 hits. “The challenge for a luxury brand on the Web,” she added, “is remaining exclusive even when you’re using a [global] medium.”