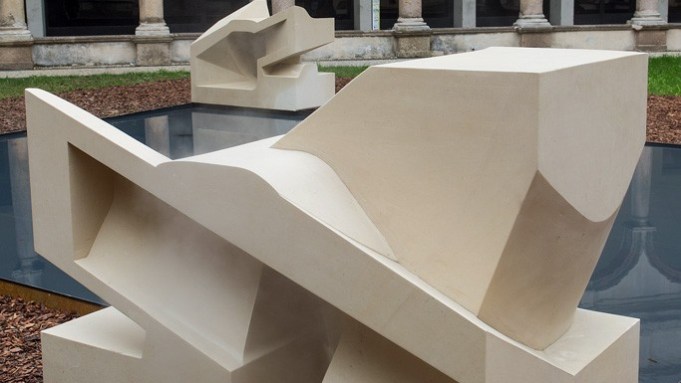 MILAN — Ferragamo Parfums’ new Acqua Essenziale men’s fragrance is sponsoring a design week project at the University of Milan. The installation, “Inversion,” by American architect Steven Holl, is part of the Hybrid Architecture & Design Exhibit, which opened April 8 and will run through Sunday.

Surrounded by the university’s old white columns and rusty brick archways, the installation is composed of six void-cut limestone blocks from Lecce, Apulia, resting alongside a shimmering pool of water. In an interview Friday, Ferragamo Parfums chief executive officer Luciano Bertinelli said the company was planning on upping its design week presence in the future.

“The Ferragamo fashion house has always been interested in art, and we still are,” he said. “Ferragamo Parfums is definitely growing and so we wanted to make a cultural statement, illustrating the connection between the material and water.” He noted that after seeing the plans for the Hybrid exhibit, the company immediately wanted to sponsor Hall’s installation.

“I find the idea of being involved [in design week] in a continuous way extraordinary,” he said.

Acqua Essenziale, an eau de toilette in a clear, minimalist glass bottle with a silver cap, is a fresh fragrance, with top notes of grapefruit, mint, mandarin and lemon tree leaf, a heart of geranium, cascalone, rosemary and lavender, and a dry down of patchouli, Helvetolide, cistus and vetiver. Concocted by Firmenich’s Alberto Morillas, it represents Ferragamo’s first foray into fresh men’s scents, which Bertinelli said account for 35 percent of the market and therefore represent an important growth opportunity.

Noting that Ferragamo Parfums tilts heavily towards women’s products, Bertinelli said the company was investing heavily in the men’s fragrance segment, and following the recent Acqua Essenziale launch at Macy’s in New York, distributor BPI had reported positive figures for the scent. When the launch is complete in the next 12 to 15 months, the fragrance will be available at about 15,000 doors worldwide.

“I don’t rule out that we could start a women’s design week project [next year],” Bertinelli said. “The interesting thing is that in the end, you feel like you’re experiencing the artwork, you walk through it — it’s not all detached like in a museum, and we really like that.”