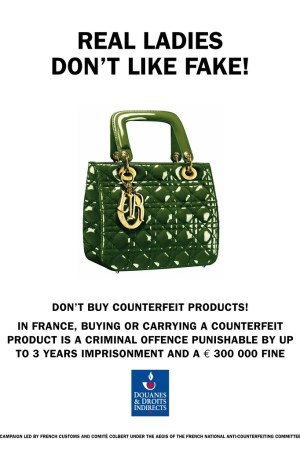 Produced in collaboration with French Customs, under the aegis of the French National Anti-Counterfeiting Committee (CNAC), 10,000 of the posters will be displayed from June in the 18 French airports with the heaviest summer traffic.

Comité Colbert president Elisabeth Ponsolle des Portes said sales of counterfeit products were flourishing thanks to the explosion of e-commerce sites offering fake designer goods. She noted that while the French postal service and several shipping companies had signed a charter of good conduct to fight against counterfeit goods on the Internet, banking institutions and payment service providers had yet to join the effort. “We think it is strange that what has been done in the United States has not been done in France. Apparently, yes they can, and I don’t see why we can’t,” she said.

Christian Dior chief executive officer Sidney Toledano, meanwhile, said that although the majority of counterfeit products were made in Asia, the roots of the problem lay at home. “The people buying fake goods are not Chinese, Vietnamese or Russian, they are European,” he said. “Every time you buy a fake Lacoste, a fake Longchamp, a fake Chanel, you are shooting yourself in the foot on the values you hold dear.”

The CNAC estimates that counterfeiting costs France 6 billion euros, or $7.5 billion at current exchange, in lost revenue ever year.