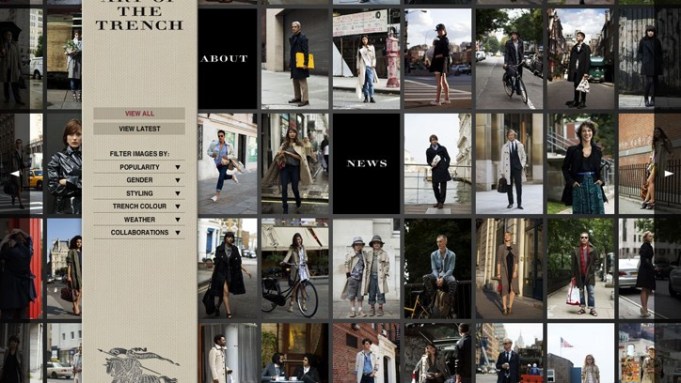 Get ready for marketing via social media — the sequel. The next hot TV show, music or fashion video is coming soon from a brand near you.

Content is not only king, it’s multiplying rapidly and is in the hands of growing numbers of people — much to the joy, the chagrin and even fear of brand marketers who are learning from and leveraging these networks, executives said.

By engaging in social media marketing, brands are putting their images and reputations on the line, associating their names with potential controversy, in hopes of entertaining, informing and provoking their followers.

Whether it’s a tweet from Tommy Hilfiger, a new program on A|X TV, or a consumer’s thoughts on a Burberry trenchcoat posted at Burberry’s artofthetrench.com, content is engaging enthusiasts, spreading the day’s news, creating spur-of-the-moment parties, sports events and volunteer efforts — even sparking some purchases.

“The people who win will be thinking more like a content publisher than an advertiser,” said Brian Halligan, a former venture capitalist who is now chief executive officer of HubSpot, a marketing software company.

According to the game plan, savvy players will post compelling information, the burgeoning population of social networkers will link to those posts, and that content, and ads associated with it, “will spread all over the Web,” Halligan said.

Brand marketers’ efforts to gain followers by posting meaningful content daily in this expanding social sphere is going to trump the recent rush to advertise and push promotions aimed at the network audiences, marketing experts said.

Labels such as Dockers and A|X Armani Exchange are at the leading edge of the content revolution — in which marketers become primary providers of the content they once only advertised around. Dockers began teasing its “Men Without Pants” Super Bowl XLIV commercial two weeks before game day on its Facebook page and on YouTube. A|X Armani Exchange launched A|X TV on the brand’s Facebook page in October.

Dockers is playing on the immediacy and accessibility of social media to revive interest in its khakis franchise by giving viewers of the teaser the information they need to win free khakis in a mobile smartphone tie-in with the Super Bowl spot. It’s also encouraging kindness (and posting) as part of its broader “Wear the Pants” campaign, by asking its fans to “share your umbrella, treat a friend to coffee, give of your time [or money] for a good cause” on Wednesdays. In a 21st-century revision of casual Fridays, it’s calling midweek “Wear the Pants Wednesdays.”

Programs being created by A|X for its fledgling TV channel include interviews with DJs, coverage of fashion shows and an inside look at the making of ad campaigns. “People can view, share and comment on TV content,” said Tom Jarrold, senior vice president of marketing and communications at A|X Armani Exchange.

Posts by social media users about viewing A|X TV are crucial because they “heighten the credibility” of the brand’s content, Jarrold said. A|X Armani Exchange considers it “essential” to create original content to fuel “user-created posting and linking,” he said of the buzz phenomenon. “You’ll see a lot more of that from us and the fashion industry this year.”

Last year, marketers were “deciding whether they should play” in social media, said David Balter, ceo of BzzAgent, a word-of-mouth marketing agency and network. “This year, it’s ‘We have to.’”

Tommy Hilfiger staked out turf on Twitter and Facebook to forge a closer connection with the brand’s devotees, just as Hilfiger’s Fifth Avenue store opened in September. “With a brand like ours — with Mr. Hilfiger our face, brand and voice — social media allows for a personal dialogue between him and our fans,” said Avery Baker, executive vice president of global marketing and communications. Hilfiger himself has been tweeting “pretty frequently — every week or two,” Baker noted, and sometimes more often, as when the Fifth Avenue store launched. He’ll pick up the pace during New York Fashion Week in February.

Tommy Hilfiger chose Facebook, where it has amassed 216,639 fans, and Twitter, now with 1,970 followers, based on what it saw in its own offices. “Those are the two dominant media being used by our targeted age group,” Baker said of Hilfiger staffers in their 20s and early 30s.

Virtually all the advertising clients of KraftWorks, many of them in the fashion world, have been talking about capitalizing on social media, said agency president Neil Kraft.

Enhancing the effectiveness of social media marketing “all comes down to content,” Kraft said. “If Ralph Lauren were willing to tweet about his observations, tastes, what he’s into, it would bring tremendous interest,” suggested Kraft, who worked at Polo Ralph Lauren Corp. in the early Nineties. “When you run an ad with two people staring into space, there’s not much depth there.”

Marketers said efforts like those of Julie Powell, whose blogs about cooking every recipe in Julia Child’s “Mastering the Art of French Cooking” in a year became the basis for the 2009 film “Julie and Julia,” are more likely to connect with social media fans than are advertisements.

Powell’s blog caught fire, prompting Web site owners to link to it, which led to the blog’s rise in Google searches. It wasn’t long before she was fielding calls — ironically — from traditional media executives, her own book was published and a star was born.

“Some brands are going a little too hard, selling too hard” in social networks, said HubSpot ceo Halligan, author of “Inbound Marketing: Get Found Using Google, Social Media and Blogs” (Wiley: $24.95). Hard-sell players are likely to be seen as too commercial, he said, adding: “The public won’t promote you. No one wants to help you sell your product.”

Social media is a forum for marketers to learn what’s on their followers’ minds.

“Fashion ought to become [more a] part of the conversation,” said Chris Brogan, president of New Marketing Labs, a digital marketing consultant.

By creating content, “listening” to what their followers say about it and engaging them in dialogue, fashion brands, among others, can leverage social marketing, said Brogan, whose recently published book is “Trust Agents: Using the Web to Build Influence, Improve Reputation, and Earn Trust” (Wiley: $24.95).

About three-quarters of the U.S.’ Internet users, or 142 million people, are using social networks and blogs — but only 16 percent of those engaging in these forums said they’re “more likely to buy” from advertisers they see there, according to a May 2009 report by marketing-media consultant Knowledge Networks. Fewer than 5 percent reported they were “regularly” turning to these online destinations for “guidance” on purchases.

In cases when people used social media regularly to help them decide whether to buy something, the top five categories shopped pulled just 4 percent of those networkers when they eyed travel/travel services or banks/financial services, and 3 percent when browsing clothes/shoes, personal care and eating out. The Knowledge Network polled a representative U.S. sample of 502 people, ages 13 to 54.

At Burberry’s social media Web site, two-month-old Art of the Trench, the public is being “encouraged and enabled” to interact with the Burberry brand, Halligan said. But it’s not a hard sell. They can post photographs at artofthetrench.com that they’ve taken of people wearing Burberry trenchcoats (outdoors only). They can view and talk about coats they love and hate. They can vote for their favorites.

Though this may be more involved with a trenchcoat than many would care to get, Halligan pointed out, “thousands of bloggers and Web sites have linked to it and are talking about it. Very few marketers are doing this now. A good hire for companies would be journalists, to post content in an area of expertise.”

The country’s social networking and blogging community expanded quickly in 2009. In December, the combined 142 million social networkers in the top 10 member communities in the U.S., as identified by The Nielsen Co., represented growth of 28 percent from 111 million networkers in December 2008. Most of the upswing came via Facebook, whose users almost doubled in the 12 months ended in December, when they totaled 109.9 million people — more than one-third of the U.S. population. That was up from 55.2 million users in December 2008.

Rounding out the top five social media sites, according to Nielsen, were MySpace, a distant second in users to Facebook, with 50.2 million members, followed by Blogger, with 40.7 million; Twitter, 18.1 million, and WordPress, 15.1 million.

Marketing budgets this year are expected to follow the eyeballs and clicks. Social media are getting a high-single-digit slice of Hilfiger’s ad media spend; this “will increase” in the fiscal year starting in April, Baker said. Boosted by its growing use of social networks, one-third of A|X’s ad media budget is devoted to spending online, up from only 10 percent as recently as 2005. And KraftWorks is projecting 20 percent of its online marketing work will come in social media this year, rising to 30 percent in 2011.

“The way we learn and shop has changed a lot,” Halligan said. “We’ve gotten a lot better at blocking out ads. People hunt and gather differently — and businesses need to go where the people are.”