Gap is going back to beige this summer with a special collection and ad campaign devoted to khaki. 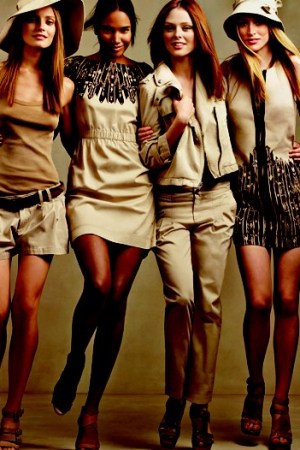 Gap is going back to beige this summer with a special collection and ad campaign devoted to khaki. Both the clothes and the campaign are the result of the third iteration of the Gap Design Editions, a limited edition collection in which CFDA/Vogue Fashion Fund finalists — this year, Alexander Wang, Albertus Swanepoel and Vena Cava’s Lisa Mayock and Sophie Buhai — reinterpret a Gap classic according to his or her aesthetic.

While the previous seasons have been devoted to white shirts, Patrick Robinson, Gap’s executive vice president of design, decided 2009 was time for change. “I felt that after two years of doing white shirts, it was time to stay current and stay cool but also stay Gap and keep surprising the customer.” Khaki was a curveball of sorts for the designers, as well. “That was a big thing for us because khaki usually connotes preppy American sportswear, and we are not preppy. Nothing about our brand is preppy,” says Buhai. “We had to think of a way that made khakis Vena Cava. How I remember khaki is wearing it as a uniform in school, because it was so boring.”

No argument there. Khaki is not among the fabrics known to send chills through the fashion world, a notion Robinson acknowledges. “It’s pretty utilitarian,” he says. “But when you give it to such talent…it’s such a blank canvas.” The designers did their part to achieve the cool factor Robinson was seeking (each created four designs priced between $39.50 and $88). But Gap itself already has quite a history of bringing beige to life via splashy khaki campaigns, the most memorable of which are television spots featuring song, dance and, often, celebrities such as Claire Danes, Patrick Wilson and Sarah Jessica Parker.

“I’ve always liked the ‘West Side Story’-inspired campaigns,” says Wang, referring to the 2000 television ad. “And the TV commercials where they sang were great.” Indeed, there’s a print and billboard campaign to accompany the Design Editions khaki collection, which will break June 16, the same day the line hits stores. Shot by Craig McDean, the campaign takes a straight fashion angle, focused on the style and cachet of the clothes and designers, who are featured alongside four of-the-moment models, Raquel Zimmerman, Anna Jagodzinska, Arlenis Sosa and Coco Rocha. When asked what’s distinctive about this campaign, which includes seven color images, Robinson replies with his favorite Gap/khaki catch phrase: “It’s cool.” ­