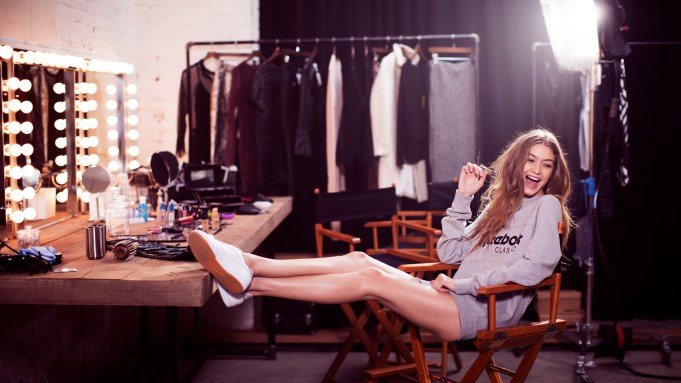 POSING PLAYFULLY: Another day, another Reebok revelation. Reebok Classic has tapped Gigi Hadid to front the spring campaign for Club C. The company revealed earlier this week that rapper Kendrick Lamar was fronting the men’s component of the campaign. The ad campaign featuring Hadid was photographed by Monica May, who has shot for brands including Persol and Under Armour.

The shoot took place at the Art Factory, a 19th-century industrial complex where Hadid was shot in a backstage setting alongside racks of clothing with a lighted vanity mirror table. Donning the brand’s Diamond Pack Club C sneaker, Hadid was pictured in various spirited poses.

“An international icon, Gigi is the perfect validator of the Club C and Classics,” said Michelle Palmer, director of Women’s Classics. “We love working with Gigi because she doesn’t hide who she is — she’s bold and confident — she doesn’t do what’s expected, she has character and personality. Since its debut in 1985, the Club C has left its mark as an iconic performance tennis court shoe, and a timeless classic in casual streetwear. The shoe’s smart yet understated design made it a club favorite both on the court and on the streets. Fast forward to today and the Club C has emerged as a modern-day streetwear icon, all while staying true to its original design 30-plus years later. In 2017 we will celebrate this silhouette with continual drops throughout the year, kicked off this week by Reebok partners Kendrick Lamar and Gigi Hadid.”

The campaign will break on the brand’s web site, in-store and on the label’s social media channels.