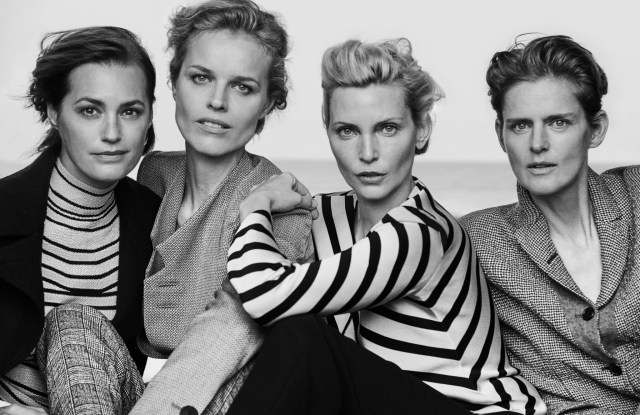 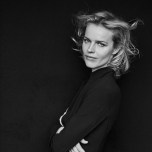 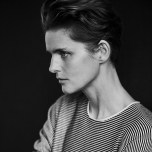 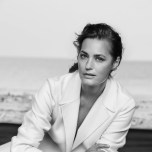 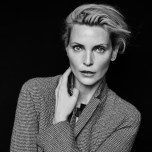 For his second New Normal campaign, Giorgio Armani features four leading models who rose to fame in the late Eighties and early Nineties and paired them with photographer Peter Lindbergh.

Eva Herzigova, 42; Nadja Auermann, 44; Stella Tennant, 45, and Yasmin Le Bon, 51, were photographed for the global spring campaign that Armani is unveiling today at a press conference in Paris.

“I wanted women of today, real women perfectly incarnating the New Normal spirit,” said Armani. “I want to convey a sense of reality, focusing on how New Normal clothes are designed to accompany everyday life naturally and elegantly.”

New Normal features classic designs infused with Armani’s signature style. Regularly updated and revised, these are pieces that are part of his collection and carry the Giorgio Armani label. The first group was introduced last March and hit stores in July.

Prices for the New Normal spring collection range from $850 for basic underpinnings and pants to $7,000 for coats and outerwear. For example, one look features a double-breasted notch lapel jacket in polka dot silk twill, priced at $2,895; a halter with high neck in silk poplin for $1,625, and a high-waist pant with front pleats in silk, $1,475. The clothes are sold at all Giorgio Armani boutiques in a space set up specifically for the purpose. “So far, the collection has met with great success among the public, which means we must have made the right choice,” said Armani.

The designer’s collaboration with Lindbergh renews a partnership based on their aesthetic affinity and appreciation of classicism.

For Lindbergh, working with the model foursome was a nice reunion of sorts. “They still have the same energy. They are now in their 40s, have families. I wanted to do portraits of women that everybody remembers from when they were younger,” he said.

The black-and-white ads were shot in a studio in Paris in an environment reminiscent of an atelier d’artiste or movie set. As for the choice of location, Armani said, “We wanted a very simple setting without any artifices, to focus all the attention on the models and what they are wearing.” He said that the campaign targets “the same kind of woman I usually target: bold, feminine, more inclined to be than to appear. A woman who works and wants to dress with care, but without looking like a fashion victim.”

Armani has previously worked with Tennant and Auermann for ad campaigns. “All four of them have appeared in my fashion shows, at different times, and every one of them has managed to add unexpected subtleties to my style,” said the designer.

Lindbergh said he wanted to show these women with their imperfections.

“It is interesting to see how heartless retouching is now used to modify beauty instead of celebrating differences,” said Lindbergh. “I do not believe in beauty standards, so why make everyone look the same and create something that does not exist?” He said that if photographers are responsible for creating or reflecting an image of women in society, it is to define women as strong and independent.

“It is somehow the responsibility of photographers today to free everyone from the terror of youth and perfection,” he continued. “I do not believe that you have to look younger than you are, and that excessive retouching will make you more beautiful. What I often refer to as ‘traces of life,’ wrinkles, imperfections are beautiful elements that makes someone unique. You can only be beautiful as yourself.”

Lindbergh said he found the models brought even more to the shoot than they did in the Eighties and Nineties. “They are as beautiful and as interesting than when I met them more than 25 years ago. I would even say that they are even more beautiful and more interesting.”

Armani has been on a campaign to bring more normalcy back to the fashion industry. At his men’s wear show last week, he berated designers who were putting flowers on clothes, when business at retail is so challenging.

“We must be in line with the times but not slaves of the past. With our designs, we must say something more but not too much. But who will wear that stuff?” Armani said. Acknowledging that he could be perceived as “a preacher,” he added, “By all means, everyone can do whatever they want, but I feel that, at 82 in a few months, I see things with distance and a detachment that young people cannot have. They should mediate creativity to make companies work.”