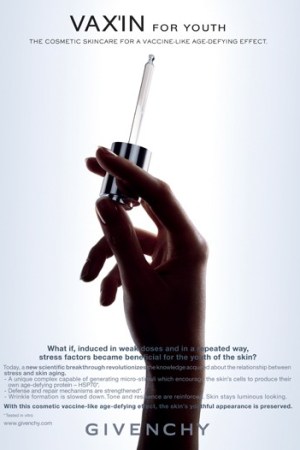 PARIS — Parfums Givenchy’s newest antiaging skin care product, Vax’in for Youth, was inspired by the theory of Hormesis, which espouses that regular exposure to microstress helps bolster cells’ resistance to future stress and therefore is instrumental in extending cellular life.

“We wanted a transversal product,” said Thierry Maman, general manager of Parfums Givenchy, who added Vax’in is for people of all ages and skin types. “It can be used with any other product.”

Givenchy worked on Vax’in with Suresh Rattan, a biogerontologist who founded and runs the Laboratory of Cellular Aging in the Molecular Biology Department of Denmark’s Aarhus University.

All living organisms age if they live longer than the lifespan needed by nature, but there aren’t genes that make people old, he explained. “There are no enemies that need to be neutralized,” Rattan added. “Over the last 50 years people have mostly concentrated on one pathway — free-radical removal.”

Now, there’s a move in aging research to focus on the more complex biological system, or homeodynamic space.

Aging is the progressive shrinkage of the homeodynamic space, he said. The objective is to strengthen that space. Hormetins, or repeated microstresses that induce Hormesis, can purportedly help that.

Rattan recognized that protein HSP70 (whose production diminishes with age) plays a key role in boosting cells’ prolonged resistance to aging and in protecting and repairing other proteins in skin. Vax’in’s formula contains hormetins Sanchi and Hypotaurine, which promote the production of HSP70.

Vax’in is billed to inhibit wrinkle formation, reinforce skin tone and elasticity, give an even and luminous complexion, plus help protect skin against harmful factors.

Its name is meant to be reminiscent of “vaccine.”

Givenchy will extend its distribution reach in many countries for Vax’in’s launch. In France, for instance, where its treatment products are traditionally sold in about 60 to 70 doors, Vax’in is to be carried in more than 1,000 sales points. In the U.S. — where Givenchy skin care is in less than 10 doors — it will be in approximately 250 Sephora doors.

“This is the biggest skin care launch ever for Givenchy,” said Maman.

Givenchy executives would not discuss projections, but industry sources estimate Vax’in will generate 25 million euros, or $31.8 million at current exchange rates, in retail sales in its first year.