Fashion brands ought to mind a widening gap between people's expectations and what they think they're getting with the goods. 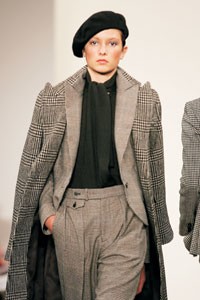 NEW YORK — Fashion brands ought to mind the gap — the rapidly widening one between people’s expectations and what they think they’re actually getting with the goods.

Indeed, this year, Americans’ expectations of apparel brands — including qualities such as style, fit and price — advanced 8 percent, while the success of the category’s seven leading brands in satisfying those desires declined by 17 percent, according to the 2005 Brand Keys Customer Loyalty Index. The resulting difference of 25 percent means fashion ranks as the fourth least satisfying among 36 categories of goods and services, a group in which the most disappointing were long-distance phone service providers, where the gap extended to 30 percent.

“It’s enormously high,” Robert Passikoff, president of Brand Keys, said of the 8 percent increase in people’s expectations of apparel, which was 3 percentage points, or 60 percent, higher than the 5 percent average increase for the 36 categories considered.

A better-educated consumer and the growing availability of a variety of brands offering similar styles at different price points have combined to create fashion shoppers who have become more demanding, Passikoff posited. In addition, with an estimated 163 million adults online, or about three-quarters of Americans aged 18 and older, he said, “There has been a proliferation of sources for consumers to get information about products, [like] comparing prices.”

That’s a sizable surge in the online adult population compared with 1995, when it stood at just 9 percent, according to Harris Interactive.

“The advent of the wise shopper hasn’t made it any easier,” Passikoff added in disclosing the fashion findings exclusively to WWD.

People’s expectations of apparel brands were based on four loyalty drivers, led by designs that are stylish and look great while being worn. “Fits well” was rated as the second most-important desire, followed by “reasonably priced/easy to find” and “quality materials/well constructed.” Those four qualities, pegged to a baseline of 100, combined to create an average expectation indexing 151 for apparel, up 8 percent from 140 in 2004.

The shortfall of between 20 and 35 points from people’s expectations of apparel brands to what they say they’ve experienced with their seven top-rated labels, Passikoff said, shows that “customers’ expectations have moved ahead a lot faster than brands have been able to catch up.”

Part of the problem, reasoned Barbara Caplan, a partner in market researcher Yankelovich Inc., is that apparel is a product in which people invest their emotions. “It’s ego-intensive; it’s very important [to us] how we look,” Caplan said, adding that the close-to-the-bone experience of the apparel one wears heightens the potential for disappointment.

“Stylish design/looks good on me” was described as the quality for three of the seven apparel brands found most satisfying by people polled by Brand Keys: Ralph Lauren, DKNY and Giorgio Armani, with the latter rated equally well for quality materials/well constructed. Three others best met people’s expectations of being reasonably priced and easy to find: J. Crew, Isaac Mizrahi, and Gap. The seventh, Brooks Bros., was most appreciated for its fit.

Curiously, the loyalty driver seen as third most important of the four — reasonably priced and easy to find — engendered the highest expectations and saw the steepest upward climb compared with 2004. It indexed 180, up 25 points, or 16 percent, from 155 last year. “The better able people are to find reasonably priced apparel, the more people want still better prices,” Passikoff reasoned. “It feeds the beast.”

The primary loyalty driver, stylish design/looks good on me, only saw a two point climb to expectations indexing 152, which, in Passikoff’s view, reflects a broader offer of fresh looks in recent years. “Everyone has caught up with each other in terms of being able to mimic [new trends] in shorter times,” he noted.

Expectations of a good fit rose a relatively slight five points, to 130, which suggests it’s the price of entry for loyalty to apparel brands, while quality materials/well constructed ran up 12 points, to 142, perhaps reflecting the same dynamic as the increasing demand for good prices: The growing presence of better fabrics and well-made garments may have raised people’s desire for those qualities.

In a survey conducted last month by the American Affluence Research Center, St. John Knits rated as the women’s designer brand offering the best quality, in a representative sample of 346 affluent men and women, from the 10 percent of wealthiest American households. It was followed by Chanel, Ralph Lauren, Prada and Giorgio Armani.

When asked to name any two brands of women’s designer/couture apparel they believe offer the best quality, regardless of price, responses were given by 126 people, or 36 percent of the sample of affluent Americans, defined by the AARC as those with an average income of $369,000 and an average net worth of $2.7 million.

The 36 percent of survey participants who answered that question about the finest quality designer/couture apparel brands was significantly lower than the 80 to 90 percent who typically respond to survey questions posed by the AARC, noted Ron Kurtz, a senior partner at the center. Asked why this was the case, Kurtz reasoned, “People may see [a branding question] as less worthwhile than questions about their general outlook for spending and the economy.”

Further, said Caplan, “Inauthentic marketing — the promise of more than is being delivered — is increasing people’s annoyance” with some of the apparel on offer. “When poor quality is presented as better than it is, people get fed up,” added Caplan, who’s an apparel marketing specialist.

Only two sectors besides long distance providers performed less effectively than apparel in fulfilling consumers’ expectations, based on the Brand Keys Customer Loyalty Index: mobile phones, with a 28 percent gap between what people want and get, and online music and books, 26 percent. Apparel was not alone as fourth least satisfying, as gasoline, wireless providers, and office copiers all showed 25 percent divides separating what people want from what they say they get.

When there’s a gap as big as fashion’s 25 percent divide between expectations and their fulfillment, Passikoff said, it tends to indicate similar products under different brands are being viewed as virtually interchangeable, with price increasingly the basis of any differentiation.