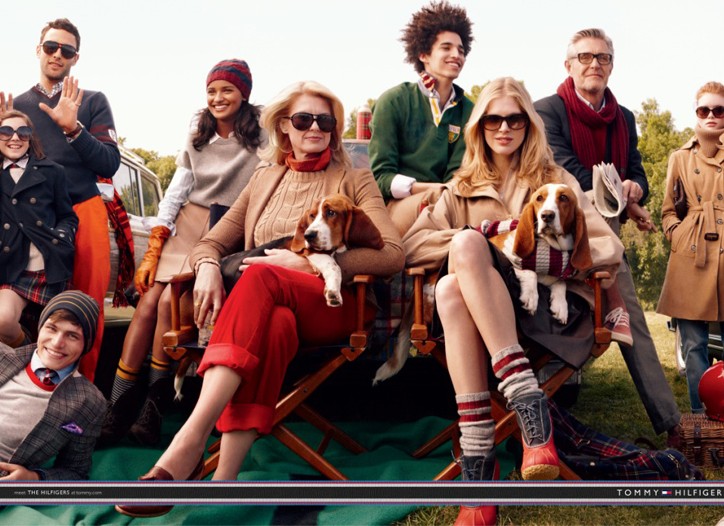 There’s a father and mother (often with a Bloody Mary in hand); several children, including a son who was kicked out of boarding school, a daughter who doesn’t speak and a Portuguese foreign exchange student who never left; two basset hounds, and a station wagon. Think “Modern Family” for the fashionable set.

“This new ad campaign…takes our visual identity in a fresh direction while respecting our brand aesthetic,” said Tommy Hilfiger. “This is the first campaign to truly capture the brand’s 25-year heritage of twisted, pretty American sportswear.”

The global campaign unfolds on a football field where the Hilfigers have gathered before a game. Car trunks are opened, blankets unfurled, picnic baskets appear and the ultimate tailgate party begins. What sets this campaign apart from previous efforts and other fashion ad campaigns that feature models is both the creation of a dysfunctional family with 16 members — and the injection of humor. By using irreverence and creating a story, the goal is to bring the characters to life in a memorable way.

The images feature the characters in full-out preppy regalia (down to the glen plaid ice bucket), wearing clothing from all of Hilfiger’s lines: runway, the Macy’s collection, Tommy Hilfiger Sportswear collection, accessories and licensed products.

The fall campaign, which was created by Hilfiger’s new ad agency, Laird + Partners, photographed by Craig McDean and styled by Karl Templer, is the first installment of a continuing portrayal of the family’s traditions, travels and adventures.

“We wanted to develop something unique for the brand that captured a strong sense of iconic prep, style and flair, but with a looseness, quirkiness and touch of humor that only the Hilfiger brand can bring to the classics,” said Trey Laird, chief executive officer and executive creative director of Laird + Partners. “We wanted to do something different that Tommy can own. I talked to Tommy and the key people who work there and realized they’re good when they’re not so serious.”

The campaign will begin in September with 10-page heavier-stock inserts in Vogue, GQ, Harper’s Bazaar and Vanity Fair, as well as 18 European publications. There is also a key outdoor component in European cities such as Amsterdam, Brussels and Zurich. Some 40 percent of the European budget will be devoted to outdoor advertising, using megaposters of panoramic shots of the family and random postings.

Online will include banner and skyscraper ads and homepage takeovers. Hilfiger spent $32 million on its global ad campaign last year, excluding fragrances, according to published reports. Avery Baker, executive vice president of global marketing and communications at Hilfiger, a division of Phillips-Van Heusen Corp., declined to reveal the ad budget but said the company plans to increase its spending this year by 60 percent.

Online, consumers can visit “Meet the Hilfigers,” on tommy.com, where each family member is profiled. For example, one son, Noah Hilfiger, is described as “easy on the eyes. Hard on cars. Moving violations everywhere, from Boston to Baltimore — but still not a scratch on him. Change of name to facilitate transition into future acting career….”

Some of the characters will post on Facebook and Twitter about their activities. For example, users can follow Noah online as he spends a night out in Manhattan. There also will be behind-the-scenes footage of the photo shoot, which took place in Los Angeles when the original Long Island location flooded after a major rainstorm in March.

In addition to online ads with The New York Times, Style.com, Polyvore and the Glam Network, Hilfiger has developed Ultimate Preppy Tailgating stations with the online radio service Pandora. Each of the 10 stations will feature a sampling of favorite artists and genres from members of the Hilfiger clan. For example, Bernard’s station will focus on classic crooners, Noah’s will have indie rock bands and the station of daughter Chloe, who speaks four languages and is an aspiring playwright, might feature Mozart.

Laird and Hilfiger are working with Code and Theory, an interactive agency, for the social media campaign. Among the online features will be “Chloe’s Closet,” “Morgan’s [one of the basset hounds] Must-Haves,” “Bernard’s Books” (literary recommendations) and Sam’s [the one thrown out of prep school] “Prep Pop” (his playlist).

“We’ll bring the tone, humor and fun of the Hilfigers into the site experience,” Baker said. “We’ll develop special content with each of the characters.”

Baker noted the company plans to organize some “pop-up tailgate parties” in Europe in the fall, since that very American custom isn’t well known in Europe.

“We see this as long term,” Baker said. “Next season, the family will be coming back.”