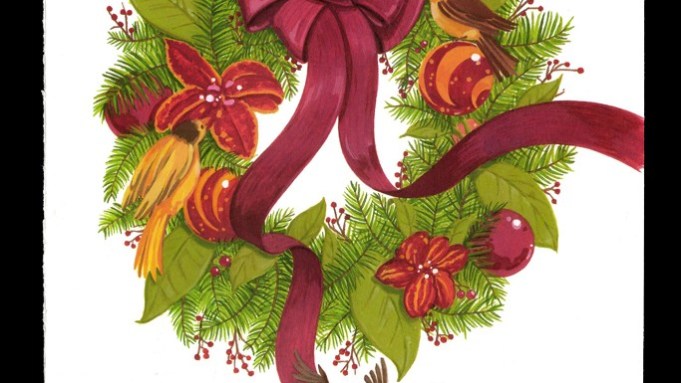 The holiday shopping season is already in full swing.

Holiday catalogues began arriving in consumers’ mailboxes the week before Halloween. Those include catalogues from the J. Peterman Co., Pendleton and Ross Simons, which sent out a 5.5-by-8.5-inch version of its jewelry catalogue with a red backdrop on the cover that said “Holiday Preview 2013: With prices this great, don’t wait.” Ross Simons touted free shipping and free gift wrap on everything. The company then followed slightly over a week later with another mailing whose cover said “Holiday Deals Revealed.”

Wal-Mart started its “Early Bird Online Deals” for holiday on Friday, while some e-tailers plan to have their holiday merchandise online this week. Seattle-based e-tail beauty start-up Julep unveiled its holiday lineup on the site on Friday, although a pop-up site in the Union Square area of Manhattan won’t open until December. Flash-sale site Rue La La on Oct. 17 made available to members its new gift-return and holiday gift center programs.

According to Michael DeSimone, chief executive officer of Borderfree, the site that enhances international e-commerce options, its merchant partners are “getting the word out about their holiday promotions” earlier this year.

Borderfree merchant partner Gilt launched its holiday program Monday, although some special promotions such as off-peak sales and mobile-exclusive offers won’t be unveiled until closer to Thanksgiving Day weekend. That said, Gilt is also launching several international campaigns with special offers for its customers abroad between now and Thanksgiving. DeSimone said many merchant partners are also getting the word out on holiday promotions to international shoppers earlier this year compared to last year. That’s because many e-commerce sites are selling and shipping to overseas customers.

Alex Miller, vice president of e-commerce at TV shopping channel QVC, said the official kickoff for holiday was the weekend of Oct. 19 and 20. This year, with its acquisition of social platform ToGather, it will feature more community content from customers, such as inviting them to suggest gift ideas, customized lists and generating custom gift collections.

According to Anuj Nayar, senior director of global initiatives at eBay Inc.’s PayPal, in a Sept. 30 PayPal blog post, “Because PayPal processes nearly one-fifth of global e-commerce, we can see trends as they appear. Traditionally, we see a rise in PayPal transaction volume for holiday shopping that kicks off before Thanksgiving and continues until the end of December. However, when we looked at the data for 2012, we saw that the U.S. holiday shopping season started on Sept. 30!”

Nayar said consumers are hungry to snap up the best offers available, and are doing so from a global marketplace versus past years when they shopped mostly from local stores. Technology is fundamentally changing the retail calendar, he said, noting that domestic and international merchants have an incredible opportunity to tap into this phenomenon early.

In a recent company report, Nayar said it found the “global cross-border shopping opportunity to be worth more than $100 billion in the top six markets alone. Almost 100 million consumers around the world are shopping cross-border and that number is expected to explode in the next few years.”

That will be fueled in part by new firms such as WindowsWear, which bridges technology and e-commerce. The company launched last year shortly before holiday, showcasing store window displays from around the world so consumers and merchandisers can keep tabs on global fashion trends in real time. This year, the company is launching shoppable holiday windows, where consumers can shop merchandise that’s in the window displays, said Jon Harari, cofounder and chief executive officer.

Stores are already setting up their windows for holiday, with retailers in London expected to unveil their visuals this week, although Selfridges showed its holiday windows even earlier during the week of Oct. 21, Harari said. Stores in the U.S. typically follow the second and third weeks in November. Lord & Taylor is set to showcase its holiday windows at its Fifth Avenue flagship on Nov. 13.

Alison Paul, vice chairman at Deloitte LLP and the retail and distribution sector leader, said, “Thirty percent of consumers [in a Deloitte survey] plan to do the majority of their shopping before Black Friday.” She added, “Retailers are pushing the holiday early this year. Some are already taking down Halloween stuff and putting up Christmas decorations.”

Paul said the pressure’s on for retailers because Thanksgiving is a week later this year, and that translates into six fewer shopping days during the holiday selling season.

In a survey from PriceGrabber earlier this month, the majority of respondents said they “plan to start shopping for the holidays in October and November.” When asked about the impact of Hanukkah, which starts the day before Thanksgiving, 25 percent said they will be “done shopping very early.” PriceGrabber said when shoppers were asked their strategy for finding deals for Hanukkah, “50 percent said they will look for retailers running early sales.”

Some retailers last year, such as Wal-Mart and Sears, opened at 8 p.m. on Thanksgiving Day. Kmart opened at 6 a.m., but closed for a few hours during the day last year. This year, Kmart will open starting at 6 a.m. and remain open for 41 hours straight through 11 p.m. on Friday night.

Other brick-and-mortar retailers for the most part have only disclosed a preview of some of their holiday plans for the Thanksgiving Day and Black Friday sales weekend. This year, many of the leading chains also will open at 8 p.m. on Thanksgiving Day.

Many retailers have been finding ways to provide discounts to shoppers who buy now, even though they’re not advertised as holiday doorbuster deals. For shoppers hitting Bon-Ton stores in late October, special coupons such as $50 off a $100 purchase plus an extra 25 percent off certain categories were enticements.

Macy’s has discounts for selected merchandise on its site and J.C. Penney — which has vowed to be “aggressive” during the holiday period — has begun routine e-mails to its customers notifying them of discounts and other special offers.

Penney’s last month said it teamed up with Shopkick, a shopping app that rewards shoppers for walking into stores. The program will also allow Penney’s shoppers the ability to earn “kicks,” Shopkick’s proprietary reward currency, along with special Penney’s offers, as rewards for shopping at the retailer.

According Deloitte’s Paul, the discounts and partnerships are calculated to get consumers to “buy now. The key is get the dollar now so you don’t lose it to the competition as you move further into the holiday season.”