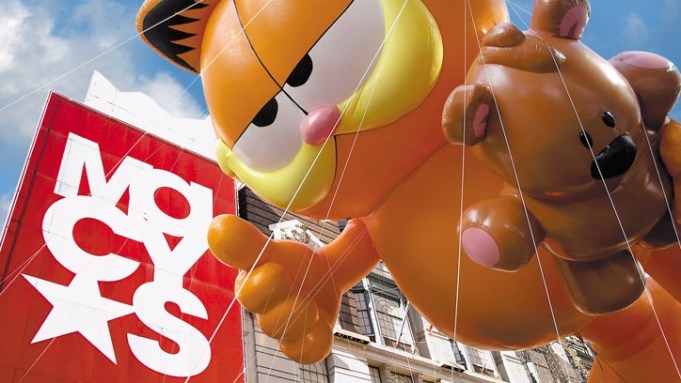 One morning every late November, New York’s Broadway is blocked off to traffic so that the likes of Snoopy, Hello Kitty and Kermit the Frog can make their way downtown. Those popular cartoon figures (in the form of gigantic helium balloons) are just a small part of the annual Macy’s Thanksgiving Day Parade, considered by some to be the “crown jewel” of the department store’s annual marketing efforts.

The cost of the parade is a closely guarded secret, although the company’s advertising and promotional spending last year, net of cooperative advertising allowances, totaled $1.2 billion. But ask any executive—or anyone somehow connected to the parade—and the event’s price tag pales in comparison with the results, summarily described across the board as “priceless.” And while the event doesn’t garner an audience close to, say, the Super Bowl, a combined 54 million people either tune in or visit the city each year to take in the parade, and many visitors to New York are lined up the next day in Herald Square, on Black Friday, ready to shop.

Newspaper and TV advertising aside, Macy’s marketing through community events such as the parade, the 4th of July Fireworks or even the annual Flower Show, places a more personal and sentimental value on the store  experience, making it one that customers want to visit year after year. Martine Reardon, executive vice president of Macy’s national marketing, events and public relations, says approximately 250,000 people stopped by the Herald Square flagship during last year’s Flower Show, an event that runs for two weeks each  spring. Similar events take place at stores in San Francisco, Minneapolis and Chicago. “The crowds are amazing— people come from as far as Europe and the Orient to see what’s new,” says Reardon. “And that’s just the Flower Show. People come from all over for the parade, as well.”

This fact, at least in part, could be credited to Jean McFaddin, who was hired in 1977 as a producer-director of the parade. She left the job eight years ago, but during her more than two–decade run at Macy’s, she added more floats, bigger balloons, Broadway shows and more marching bands from across the country.

“The parade needed to be brought up to speed,” says McFaddin of her early days with Macy’s. “They had never had professional leadership before. I was someone who had trained in the theater. But when I got that first  call from Macy’s, I never dreamed it was for a job. I thought they were calling to offer me a credit card. It was truly the opportunity of a lifetime.”

She realized that first year that the parade needed “size, big theatrical entertainment and more balloons.” And lots of cheerleaders. She fondly remembers a conversation with a colleague, who wanted 30 cheerleaders for the parade: “That was a drop in the bucket. I wanted 800, from all over the country.” And she’s not shy about her lasting impact on Broadway. “We would put a show in the parade and it would affect the box office  for a year after,” McFaddin recalls. “I think that’s part of my legacy.”

McFaddin counts her time with Macy’s as the greatest years of her life. One of her first tasks was to update the technology behind the parade. She found a company in South Dakota, called Aerostar International, famous for its military and aerospace products, to update the balloons. “They are still doing the balloons,” she says. “Other balloon companies have been born as a result of what we did. I saw the potential in the parade as a great and successful business.”

One of her favorite stories (she is careful to protect the identities of celebrities who haven’t had great success in the parade) involved Roberta Flack. As McFaddin remembers it, she heard that the songstress called Macy’s directly and asked to be involved in the parade one year. McFaddin couldn’t believe Flack made the call herself (since publicists and managers always call on behalf of their celebrity clients), but she decided to add Flack to the lineup anyway, since her colleagues were all convinced it was, indeed, Flack. The singer’s manager somehow got wind of all of this and called McFaddin to let her know that it had been an imposter who had called, and that this woman had a history of trying to impersonate Flack all over town. But the manager said the real Flack would love to participate. “When the day arrived, we had Roberta Flack on a float, and another standing around, and, to be honest, I still have no idea if the real one was on the float that day.”

She said many musicians have used the parade as a launching pad for their careers, including Dolly Parton, Clint Black and Barry Manilow. Older stars, such as Bob Hope and Sammy Davis Jr., also have appeared. Every boy band and pop star seems to have performed at least once, although the event doesn’t usually court stars as big as Madonna, “because we don’t want to stop the parade.”

McFaddin also worked on the annual Macy’s 4th of July Fireworks, an event that presented its own challenges, such as convincing TV networks to air the show. “They wouldn’t do it for the longest time,” she recalls. “They were all convinced that the ratings would be terrible because they didn’t think anyone stayed home for the holiday. As it turned out, the ratings have been phenomenal—among the highest on TV—and that is because we made sure the quality was absolutely fantastic.” The show takes more than a year to create, more than a week to install and has approximately 35,000 fireworks.

But big theatrics aside, Macy’s also is known throughout the country for holding smaller events and for its work with charitable organizations. A few years ago, buyers at Macy’s traveled to Rwanda to see some baskets, woven by local women, that had the potential to sell in stores. After the trip, buyers decided to offer them in the Herald Square location and they quickly sold out. “They exploded on macys.com,” says Reardon. “We now sell 45,000 annually. We are trying to help develop the economy there through what we are calling ‘trade, not aid.’ ” The overall impact is improved public health, and rebuilding and reconciling relationships that were torn from the 1994 conflict.

“People tend to focus on the big events like the parade, but we are also focused on so many other things,” says Reardon. “I always tell people to come and see it for yourself. It’s really the best way to be a part of it.”