In Love With Eva: Mendes to Be Calvin Klein Underwear’s Face

Calvin Klein Underwear will kick off a worldwide advertising campaign with a sexy new face and voluptuous figure: Eva Mendes. 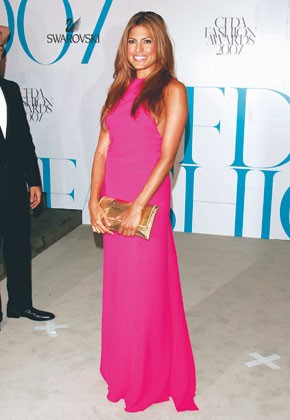 Calvin Klein Underwear will kick off a worldwide advertising campaign with a sexy new face and voluptuous figure: Eva Mendes.

The deal deepens the brand’s involvement with Mendes, who already has been named as the face of Calvin Klein’s upcoming fragrance, the name of which has not been revealed.

The Hollywood connection with Cuban-American Mendes, who is known for her roles in movies including “Hitch,” “Training Day” and “We Own the Night,” with former Calvin Klein Underwear model Mark Wahlberg reflects the growing trend of designer brands associating their images with celebrities. Kate Bosworth is the current face of Calvin Klein Jeans and Hilary Swank was the glam image for Calvin Klein Underwear in 2006. Meanwhile, David Beckham is plastered all over billboards worldwide in ads for Emporio Armani Underwear.

Beginning this fall, the sultry Mendes will be featured in a multimillion-dollar print and outdoor advertising campaign for the Calvin Klein Underwear brand, as well as the launch of Seductive Comfort, the latest introduction of Calvin Klein foundations for women. The Seductive Comfort group addresses the consumer demand for underwear and intimates that have the aesthetics, comfort, function and brand recognition for women with fuller figures and generous bust lines.

Asked if the image of Mendes’ two visits to rehab in February at the Utah-based Cirque Clinic where Lindsay Lohan and Kirsten Dunst have also checked in is expected to impact the campaign, Tom Murry, president and chief operating officer of Calvin Klein Inc., a division of Phillips-Van Heusen Corp., said, “No, it has not. We were already in one [fragrance] campaign when it [rehab] occurred and it did not affect our decision-making for the underwear campaign.”

Mendes is a Calvin Klein aficionado and has been wardrobed by Calvin Klein Collection numerous times. She has worked with the Collection’s creative director, Francisco Costa, for events including the Council of Fashion Designers of America’s awards gala, the Whitney Art Party for the Whitney Museum, Fashion Rocks and last month’s Independent Spirit Awards. She even visited the Calvin Klein flagship on Madison Avenue earlier this month to pick up a few outfits to celebrate her birthday.

Murry said the company was pleased to be able to “capitalize on the benefits of having a beautiful and talented actress like Eva Mendes featured in two campaigns running this fall.

“She really embodies the essence of the Calvin Klein brand and we look forward to seeing that carried through in the creative,” said Murry. “We are trying to get across that these new products are for fuller busted, shaplier kinds of women and when we looked at the talent, Eva was right.”

Details of the ad campaign have not been finalized, but visuals from the print campaign were “handled in-house, working with Fabien Baron,” said a spokeswoman. Baron’s New York-based company, Baron & Baron, handles the creative direction on most Calvin Klein campaigns.

Shipments in the U.S. are scheduled for Aug. 25, with three other launch dates worldwide — Sept. 8 for Europe, Sept. 25 for Canada and Dec. 25 for Asia. Additional deliveries are slated for the Mideast and Australia thereafter.

Mendes, who could not be reached, said in a statement, “The company has such an incredible creative legacy. I’m honored to be associated with such an iconic, world-class brand like Calvin Klein.”

Murry noted that the global innerwear campaign with Mendes will run simultaneously with a new Calvin Klein fragrance launch, for which Mendes also is the new face. He would not reveal the name of the new fragrance.

Regarding the look of the Seductive Comfort collection, Bob Mazzoli, chief creative officer of Calvin Klein Underwear at Warnaco Group, which owns the Calvin Klein Underwear brand, said, “We have pursued the aesthetics in a holistic way. We won’t budge on the aesthetics or the function of this program. Seductive Comfort is our new collection of bras through which we will offer a unique combination of the Calvin Klein aesthetic with a new level of fit and support. Eva’s universal appeal will enable us.”

Kay LeGrange, president of Calvin Klein Underwear, said, “We launched Perfectly Fit by Calvin Klein in 2005 and established ourselves as a core bra resource in department store channels, and we really rocked. The introduction of Calvin Klein Steel for men in 2007 reinvigorated the [men’s category], and we’ll do it again with Seductive Comfort for women.” The ads for the Steel product featured actor Djimon Hounsou.

Seductive Comfort will consist of three bra styles: a Customized Lift bra that will offer enhanced comfort and support, hidden elastic treatments and stitch-free hook-and-eye closures; a T-shirt style that will feature a proprietary foam cup for every cup size, and an Underwire number with a spacer cup lining [a double knit with lightweight air pockets] for women who do not want to add dimension, but want an everyday bra.

The bras will retail for $44. Sizes range from 32A to 38DD. Colors will be ivory, dune beige, black, blush pink, slate gray and smoke brown.