The multimedia campaign will break next month and include male model Gabriel Aubrey. 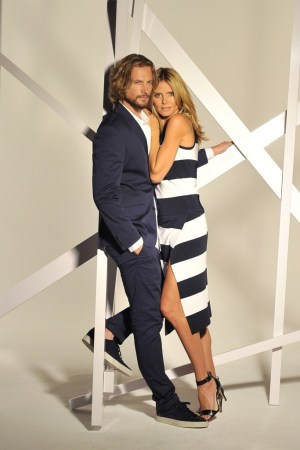 If 40 is the new 30, then Macy’s INC International Concepts has hit the marketing sweet spot on the nose. The brand has tapped Heidi Klum, 41, as its 30th anniversary ambassador, along with male model Gabriel Aubry, 39.

The multimedia campaign will break next month in March books as well as February ROP, billboards, Jumbotrons and Macy’s in-store displays, windows and digital platforms.

“Thirty years is a big deal. It’s a very long time for any company, really, so I’m excited they brought me back for it,” said Klum, who first worked with the company 15 years ago. “The clothes are always fun and a little sexy,” she said between takes at Los Angeles’ Siren Studios.

As they joked and posed for photographer Walter Chin, Klum and Aubry looked like old friends, but it was the first time they’d ever met.

“It’s amazing because he looks great in every photo. It can be a little tricky when posing with another model, because I tend to do a lot of weird things. I laugh a lot, I do goofy faces, serious faces, sexy faces…and I can’t see what he’s doing, but thank God he always looks hot, so I just have to keep track of how I look,” Klum said.

“Thank you, Heidi,” Aubry said. “Really, the only person I knew today was Walter. I’ve worked with him a lot, and when he knows he’s got the shot, he’s got the shot. The clothes and the set felt real fresh, so that always helps make it easy.”

Klum may be affable, but she’s also a taskmaster on set. While Aubrey retreated to his dressing room to return phone calls, she stood over the monitor with Chin, appraising the photos. “I like that one. But is there one where I don’t look like I’m not wearing pants?” she asked of one setup with a pair of black-and-white short shorts and a white trench coat, part of the March delivery. Chin, who also shot Klum’s first INC campaign, came prepared with some of the original shots, which the two pored over before the shoot.

“The 30th anniversary of INC is a significant milestone, both for the brand itself and for Macy’s,” said Jeff Gennette, president of Macy’s Inc. “A Macy’s private brand, INC has grown over the past three decades into a real powerhouse, earning its place among the most popular brands in our overall portfolio and serving a very loyal fashion customer. We look forward to celebrating INC’s past, present and future with a lot of exciting activity over the course of 2015.”

While the company declined to specify the percentage of INC in Macy’s overall in-house business, Nancy Slavin, senior vice president of marketing for Macy’s Merchandising Group, called it, “among the suite of power brands at Macy’s, a real complement to Tommy and Calvin and Ralph. It’s a legacy brand with a tremendous amount of organic growth still to be had.”

The driving fashion theme of the women’s spring 2015 collection is colorful feminine, with plenty of pastel florals balanced by crisp, tailored black-and-white pieces serving the wear-to-work market. For men’s, which originally launched before women’s, the emphasis is on transitional dressing between categories. While the fashion is more nuanced in tailoring, there’s an increased emphasis on contemporary trends in denim, weekend wear and casual suiting categories.