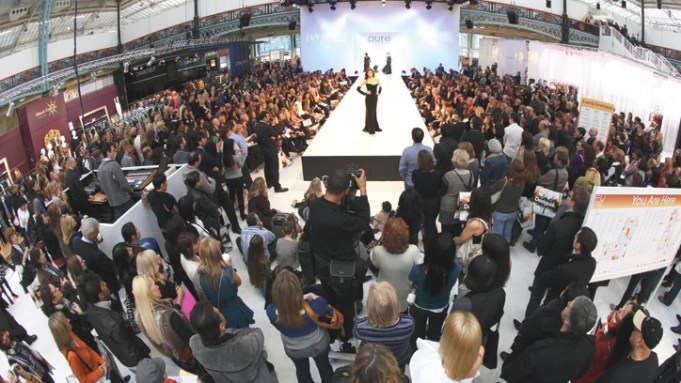 A quiet optimism is percolating among British trade show organizers, who are benefiting from the weaker pound and a wave of fledgling fashion labels emerging despite the hard times.

“Many U.K. retailers aren’t planning to travel abroad this season, so there are great opportunities for international exhibitors who are looking to expand in the U.K.,” said Samantha Bleasby, event manager for Pure, the women’s fashion and accessories show, which will take place Aug. 2 to 4 at Olympia in West London.

At the most recent edition of the fair, visitors were up 5.9 percent in February, and 35 percent of the 900 brands exhibiting were new to the show.

Odysseus Constantine, director of the directional streetwear show Margin, said the weaker pound proved a boon last season — and he’s hoping the trend will continue. Since last spring, the pound has fallen 32 percent against the dollar, and 11.4 percent against the euro, making travel to the U.K. — and prices — cheaper than they have been in years.

“In February I definitely noticed an increased attendance from eurozone countries, particularly France, Spain, Belgium, Germany and the Netherlands, who in the past were put off by the cost of traveling to the U.K.,” he said.

He added that many new labels from countries such as Austria, South Africa, Germany and Thailand have chosen the next edition of Margin for their global launch, partly due to the better exchange rate. Margin’s Aug. 2 to 3 show will take place at The Music Rooms in central London.

As London Fashion Week prepares to celebrate its 25th anniversary in September, organizers are hoping the weaker pound will continue to fuel business.

Simon Ward, the newly named co-chief executive of the British Fashion Council, said February’s event was a success. “We were very pleased with the level of buying that took place at an obviously difficult time, and I think the weak pound certainly helped to compensate,” he said. The LFW exhibition will move to Somerset House on the Strand in September. Organizers said they wanted the fair to be closer to other shows taking place in the West End.

Trade show organizers say there has been an influx of new labels at the various fairs as a result of the numerous layoffs. In Britain, employees who are laid off often receive generous compensation packages, and many have used the money to invest in new businesses.

“I’ve spoken to labels set up by designers who were recently laid off by large companies and are now showing entrepreneurial spirit,” said Constantine. “They say that some of the strongest companies are founded in a recession. I started Margin in a downturn.”

He said he is searching for potential exhibitors on social networking sites like MySpace to keep the show fresh.

The fairs that cater to these new, smaller labels are flourishing. At Textile Forum, the only fabric trade show in the U.K., the chance to order small quantities often attracts designers wishing to set up their own businesses.

“Designers have got to keep going and at Textile Forum they can order fabric with minimums as little as 10 to 25 meters,” said organizer Linda Laderman. “At the last show we had the highest attendance in the last six shows.”

Niche shows such as Textile Forum are proving to be more resilient to the downturn. “Many of the exhibitors have not noticed the downturn, probably because the streetwear labels are chasing a younger pound or dollar,” said Constantine.

The ethical sourcing trend for clothing and textiles has also been building momentum at trade shows, despite the downturn.

“There was a real buzz; Estethica was amazing,” said Orsola de Castro, co-curator of the ethical trade show, which forms part of the LFW exhibition.

“It’s evolving faster and more furious. These are obviously difficult times, but we know we have to be patient for a year. There is a quiet confidence,” she said.