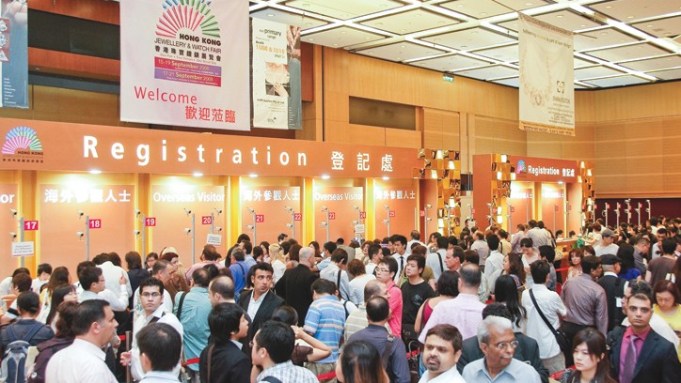 Chinese and Hong Kong trade shows have seen lower attendance numbers and exhibitor interest so far this year, but manufacturers and organizers are hoping the worst is behind them heading into the second half of 2009.

The textile and apparel industries, which have been hit particularly hard by China’s declining exports this year, are beginning to see a swing in fortunes. Although March marked the fifth consecutive month of declining exports, the 17.1 percent decrease was much better than the dismal 25.7 percent decline observed in February, and represented the first monthly improvement since exports began sliding in November 2008. The positive movement is due in part to steps taken by the Chinese government, which has raised tax rebates six times (four times for the textile industry) since last year and also doled out subsidies to beleaguered textile companies.

“The government is helping exporters a lot,” said Sarah Benecke, executive director of Global Sources Ltd., organizers of the China Sourcing Fairs. “[It] is giving subsidies to companies to join international trade shows. Many of our exhibitors have subsidies from national, provincial, even local levels.”

The government, while optimistic, will not go so far as to say that the market has bottomed out. “Monthly figures show some signs of recovery, [but] we need to watch the coming months before calling it a trend,” Reuters reported assistant commerce minister Lu Jianhua saying at a media briefing for the China (Dalian) International Garment Fair, scheduled to be held in the port city of Dalian from Sept. 20 to 23. Lu also hinted the ministry may further raise export tax rebates.

Another saving grace has been continued interest at trade shows amongst Asian and Southeast Asian visitors. Even the China Import and Export Fair (aka the Canton Fair), which suffered a 20 percent drop in sales during the April installment, reported an increase in the number of trade deals with countries from these regions.

“Many of our textile fairs have seen increases in special country pavilion participation and visitor participation from regions like Japan, Hong Kong and China,” said Wendy Wen, trade fair director for Messe Frankfurt. She speculated that the increase in Asian visitor participation was most likely due to buying offices sending local representatives to save on traveling costs. Messe Frankfurt is the organizing force behind several shows in China this year, including Shanghai’s Yarn Expo (Aug. 25 to 27) and InterTextile Shanghai Apparel Fabrics (Oct. 20 to 23). Wen acknowledged that Messe’s fairs have seen decreases in both visitor and exhibitor participation, but pointed out they have maintained the same amount of display space from the previous year.

Organizer UBM has about 1,000 exhibitors booked for the June 18 to 21 edition of the Hong Kong Jewellery & Gem Fair (JGF), slightly less than last year. The Sept. 21 to 27 installment, however, is another story. “We forecast the September Hong Kong Jewellery & Gem Fair to be the biggest ever under the current bookings,” said Wendy Pang, Marketing & Communications Manager for UBM Asia Ltd. “We have new exhibitors and quite a big part of existing exhibitors expanding to larger booths.” UBM has shaken the 27-year-old fair in several ways, first a name change (it was formally known as the Hong Kong Jewellery & Watch Fair, or JWF), followed by an expansion in exhibition space. The fair is now spread out over two venues divided into raw materials and finished fine jewelry.

Textile companies, meanwhile, are readying themselves for increased business.

“We remain optimistic about the future of the industry,” said Dan Haycook, Asia Pacific executive vice president for apparel with textile manufacturer Invista. “We are constructing a new plant at our existing joint-venture spandex site in Foshan City in Guangdong Province [China] that is expected to roughly double the capacity of the existing plant and help meet the anticipated increase in market demand.”

Invista recently participated in the Hong Kong Mode Lingerie show in April, and will be hosting Invista Rendez-Vous, a trade event in conjunction with Intertextile Shanghai Apparel Fabrics, in October.

The economic downturn has also led to unexpected bonuses for manufacturers. Last year, factories were facing the pressure of rising costs and potential employee unrest over low wages. With the volatile economic situation, those pressures seem to have disappeared.

“In a way the market is correcting itself,” said Global Sources’ Benecke. “The [Chinese yuan] has stopped increasing, and shipping and raw material costs have gone down dramatically. There was a lot of pressure on labor costs, but that’s all gone now. Now people are just happy to have a job. This time last year, factories couldn’t get workers. Now they can get as many as they want at a lower price.”

At press time, it remained unclear how the swine flu epidemic would affect upcoming trade shows in China and Hong Kong. Phase three of the Canton Fair opened on May 3 with preventative measures such as medical booths and daily sterilizations of venues taken against the flu. Local media China Daily reported a surge in sales of surgical masks at the fair, with prices up as much as 300 percent.