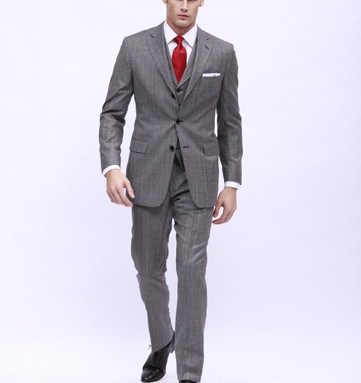 It’s the appeal of national pride matched against the lure of price.

The “Made in USA” label, particularly in hard economic times, resonates with some American consumers, but may do little to offset the enticement of lower cost for shoppers determined to seek value and savings during the recession.

Brooks Brothers, for one, is placing a bet that marketing the decision to manufacture 70 percent of its tailored clothing in a new $20 million, 92,000-square-foot factory in Haverhill, Mass., will generate goodwill and boost sales.

“It gives us the ability to have the right product, in the right stores, at the right time,” said Lou Amendola, Brooks Bros.’ chief merchandising officer, adding the facility allows the retailer to be more efficient, and responsive to customers.

“We believe we are entering a new era, where consumers will increasingly focus on purchasing products they know are ‘Made in America,’” he said.

Brooks Bros.’ advertising, marketing and labeling campaigns, which are in development, will spotlight product made in the new facility, accentuating the brand’s U.S. roots, he said.

The firm, founded in 1818, has a heritage of U.S. production. It makes ties in Long Island City, N.Y., and shirts in Garland, N.C. Shoes are produced in the U.S., England and Italy, and apparel is made in Italy and Asia. The plant may allow the company to eventually expand to other categories that are now without concentrated manufacturing in the U.S., Amendola said.

The U.S. remains one of the most expensive nations in which to make products, which is why manufacturers have moved abroad, particularly to Asia and South America. But as the country struggles with job losses, business failures and cutbacks and shrinking consumer expenditures, purchasing domestic products promoted for their high quality and nimble distribution could combine with the emotional appeal of helping to get America back on its feet.

Workers at Des Plaines, Ill.-based Hartmarx Corp. are trying to tap into that sentiment as they, along with union leaders and elected officials, intensify pressure on creditor Wells Fargo to continue to fund the bankrupt men’s company to avoid liquidation and save an estimated 3,600 jobs while a prospective sale is being negotiated.

This comes as some manufacturers are disenchanted with higher shipping and labor expenses for outsourced goods.

“The time is right for feeling good about America again,” said Steven Smith, creative director of BrandEquity, a visual marketing and brand communications firm that 15 years ago convinced U.S. athletic producer Penn to make red, white and blue tennis balls. “There is nothing wrong anymore in touting the fact something is American made.”

The $787 billion economic stimulus package that President Obama signed into law in February has a “buy American” clause for infrastructure projects, but it also contains an ample number of exceptions. And though Americans’ appetite for Japanese cars and electronic gear has diminished because of the economy, those manufacturers remain formidable competitors for dollars, as the troubled auto industry well knows.

“The U.S. public would like to buy cars ‘Made in America’ they could be proud of but…the perceived value now is that foreign brands make a better car,” Smith said.

However, foreign suppliers are not without their own challenges.

Growing discomfort about rising economic powers such as China might inspire shoppers to buy product made by American workers, said Michael Solomon, professor of marketing and director of consumer research at the Haub School of Business at St. Joseph’s University in Philadelphia.

Despite “globalization…the economic climate has people buying from home again,” he said. “Everyone across the globe seems to be blaming us, and Americans are feeling defensive.”

After the swine flu outbreak, which originated in Mexico, and health scares about Chinese-made toothpaste in 2007 and baby milk formula the following year, consumers question where goods they buy, wear and eat are produced, he noted. “In times like these, people are not feeling very cosmopolitan in embracing the world,” Solomon said. “It’s ‘us first’ now.”

And with the global market growing even more competitive, countries such as Vietnam, Cambodia, Ghana and Kenya are challenging China on the low-cost playing field.

“So pressure among producers to keep costs low is intense,” said James Heintz, associate professor at the Political Economy Research Institute of the University of Massachusetts in Amherst.

Kevin Burke, president of the American Apparel & Footwear Association, minimized the branding power of the “Made in USA” label, pointing to statistics showing that 97 percent of U.S. apparel purchased in 2008 was imported — an estimated 30 percent of it from China.

“Ask the average consumer what they look for when buying apparel and they say, ‘style, color and price,’” he said. “The label showing where the product was made is the last thing they look at.…As long as the clothing is a good price, it doesn’t matter to them where it is made.”

Burke said he met with college students on sourcing issues recently, and just one in 10 said that where a product was made meant anything to them.

Although he praised Brooks Bros.’ commitment to domestic production, Burke said: “It’s hard to imagine that given the condition of the economy…domestic production is coming back. It would be phenomenal if it did, but I don’t think it will. If you look at the level of imports versus production, the numbers don’t even match up.”

Dov Charney, founder and chief executive officer of American Apparel, which makes all of its colorful fashion basics in Los Angeles, has said he is optimistic the company can maintain its domestic manufacturing, but he doesn’t dismiss the idea of moving some sourcing outside the U.S. if necessary.

Nonetheless, consumers worldwide increasingly welcome “all things local” and favor merchandise produced where they live, according to Trendwatching.com, which tracks consumer products in 100 countries. “In a world ruled by globalization and mass production, a growing number of consumers are seeking the local, and thereby the authentic,” the firm said in a report.

Apparel brands could benefit if they promoted the specific regions where products are made, said Marc Gobé, president of Emotional Branding.com.

For example, Brooks Bros. could label its merchandise “Made in New England,” a region shoppers associate with craftsmanship and tradition, he said. “There are better ways of promoting something than just stating ‘Made in America.’ It is a very broad concept and doesn’t have an emotional connection for people to be motivated by it.”

Some retailers and suppliers are finding American-made labels less risky because of the economic environment, said Brian Meck, vice president of sales and marketing and co-owner of Pennsylvania-based FesslerUSA. The company makes private label fashion tops, tanks, shorts, skirts and leggings in the contemporary, junior, misses’ and children’s markets for customers such as Nordstrom, Saks Fifth Avenue and Urban Outfitters.

“Just knowing they work with suppliers here they can trust gives them stabilization and comfort,” Meck said. “They find it reassuring that we work in the same time zone and speak the same language they do.”

Clients express frustration with the efficiency and deliveries of foreign suppliers, and turn to the U.S. to minimize uncertainty, he said.

Los Angeles-based premium denim manufacturer Chip & Pepper touts its U.S. origins on rivets, inside tags, hang tags and leather patches, but its decision to manufacture domestically is a struggle.

“You just can’t get the same quality and access working overseas,” Chip Foster said. “It makes me sick when I see buyers meeting with importers, while my brother and I have a quality American-made product they won’t buy because they can get it for $50 less” overseas.

Chip & Pepper still maintains control of all aspects of its production, but costs are rising to the point where wholesale prices are $85 to $155, he said.

Even though the firm cuts, sews and washes all denim products in the U.S. and buys rivets and buttons from American suppliers, “in the end, buyers are buyers, and what seals the deal is price points,” Pepper said.

An American designer, who manufactured in the U.S., echoed that complaint.

The designer, who asked not to be identified, said: “In my heart of hearts, I’m so disappointed buyers do not believe in ‘Made in the U.S.’ anymore, and how everything today at retail is about price.”