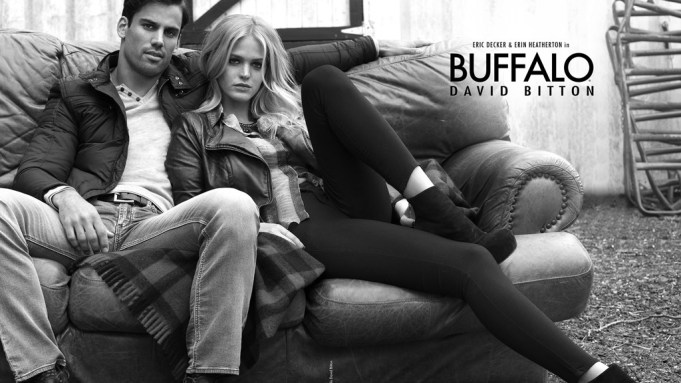 Long-suffering New York Jets fans are eager to see what wide receiver Eric Decker can do for the team’s offense in the season ahead. But he’s already gained a following in the fashion world as the second athlete to participate in the Buffalo Pro program undertaken for Buffalo David Bitton by Iconix Brand Group, which acquired a 51 percent stake in the denim brand in early 2013.

Decker, coming off a strong season with the Denver Broncos, will appear — both on his own and alongside model-actress Erin Heatherton — in a series of ads for Buffalo David Bitton to run beginning this week.

The Buffalo Pro series kicked off last year with ads featuring Chandler Parsons — then with the National Basketball Association’s Houston Rockets and now signed with the Dallas Mavericks — and according to Dari Marder, chief marketing officer of Iconix, struck exactly the right chord.

“Buffalo Pro is really targeted to our male demographic and reaching them through sports,” she said. “It’s about what guys wear to sporting events and what athletes wear off the field, but it’s also reaching women, who are just as interested in a lot of the sports their husbands and boyfriends follow.”

While the program includes outdoor, online and in-store components, the bulk is in lifestyle and sports publications including Men’s Fitness, Details and Nylon Guys. The ads with Heatherton will also find their way into women’s fashion magazines including Elle, Cosmopolitan and InStyle. The digital spend is focused on sports and lifestyle networks.

“We actually upped our print spend, the number of titles, frequency and impressions,” Marder told WWD, “and along with them, the budget.”

She noted that one of the biggest challenges with Decker was fitting in a shoot before he started training camp and became immersed in his full-time profession. Focus wasn’t a problem — she said he was especially taken with the company’s new Flex Jean, which combines a jeanlike look and jogger pant feel.

In the ads, Decker dons a vegan leather motorcycle jacket and, in one piece, nothing but Buffalo underwear. Heatherton’s ensembles range from an oxblood vest with coordinated dress to a shot on horseback wearing only Buffalo jeans.

Buffalo is continuing to build its pro ranks and, while plans aren’t yet set for 2015 campaigns, Kevin Love of the NBA’s Minnesota Timberwolves has been tapped for the roster of brand ambassadors.

Marder said the team will continue to expand. “Like with Eric, we look for athletes who have an appeal that goes beyond the core fan base,” she said. “We’re also looking beyond football and basketball into baseball and soccer.”