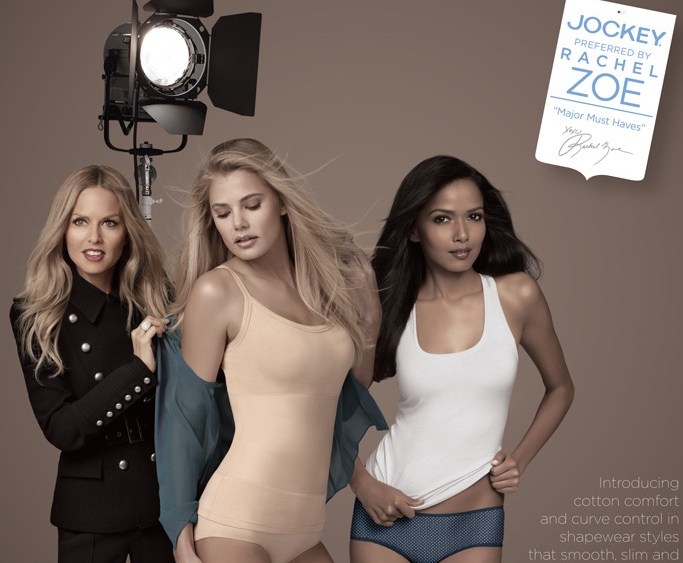 Jockey has a lot on its plate.

The 136-year-old heritage brand staged a fashion show last week in New York and will host a party with Rachel Zoe in Los Angeles on Oct. 17, which will be a launch event for the Rachel Zoe Major Must-Haves From Jockey line of women’s underwear and shapewear.

The party will feature an informal presentation, a DJ and is expected to pull in a number of Zoe’s celebrity clients, said Dustin Cohn, chief marketing officer at Jockey International.

“A film crew from ‘The Rachel Zoe Project’ will be filming the party for the reality show on Bravo,” said Cohn.

The launch of the Zoe-endorsed line for Jockey will be supported by a multimillion-dollar advertising and marketing campaign, which will break in November magazines such as Cosmopolitan, Marie Claire, Elle, Redbook, In Style, Shape and Women’s Health. An outdoor campaign will include billboards in Los Angeles and New York with the tag line “New Shapewear from Jockey, Major Curves Ahead” that will feature an image of Zoe styling a fashion shoot. The imagery also will be featured on bus stop kiosks in Chicago. An online initiative includes bloggers and a consumer contest on Jockey.com to win an invitation to the Jockey-Zoe party in Los Angeles.

“We’ll have billboards in Los Angeles on Sunset Boulevard and Sunset and Vine, and a dual digital billboard with a video in New York at Seventh Avenue and 34th Street. The bus stop takeovers will be reskinned with cool technology to look like a photo set with director’s chairs and Rachel Zoe styling a fashion shoot,” said Cohn. “The campaign is also being communicated through digital ads on Hulu, on Rachel Zoe’s Facebook and Twitter pages and on The Zoe Report, a digital newsletter with 350,000 followers.”

The fashion show of men’s and women’s underwear at the Museum of Arts & Design in Manhattan featured the spring lines. This was the second formal fashion show by Jockey in less than a year, signaling a return to seasonal fashion presentations from which the brand had exited more than a decade ago.

“We are focusing on a new modern platform and introducing a new fit that’s more pared down with a lot more color,” said Fantegrossi.

The men’s range showcased a group in “uber” white as well as updated plaids in bold color combinations.

But the “big news” in the men’s arena was a new double-face fabric of cotton and micro polyester in the Sport line that creates optimum wicking performance.

“We’re raising the bar and taking Sport to another level with the mind-set that we’re the [active underwear] authority, not another shoe company that’s doing underwear,” said Sean Radford, designer for Jockey men’s underwear.