Justin Bieber to Be Featured in Calvin Klein Ads

The singer will be the new face — and body — of Calvin Klein underwear and jeans. 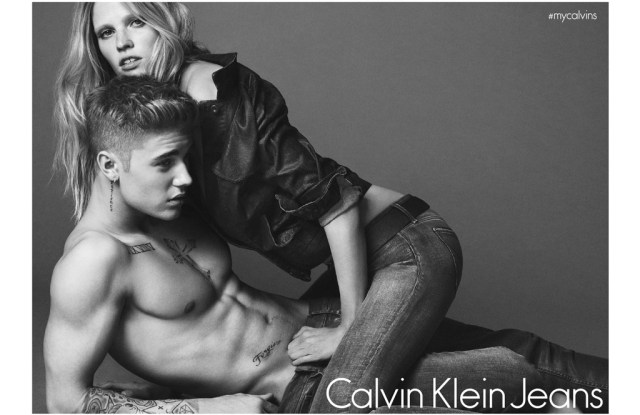 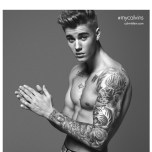 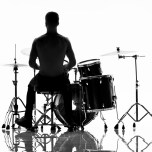 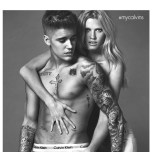 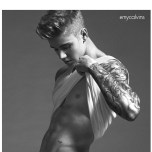 Rumors began to circulate as early as last spring that the 20-year-old had signed a deal to be featured in an ad campaign for Calvin Klein underwear and jeans. He shot selfies of himself in his Calvin undies as early as April and was photographed wearing the brand with its signature wide waistband outside his Los Angeles home. Then, at Fashion Rocks in September, Bieber did what was billed as a “surprise appearance” alongside longtime Calvin model Lara Stone and proceeded to strip down to a pair of black and red Calvin Klein briefs (and Calvin happened to be a sponsor of the event).

Figure it out yet?

If there was any lingering question, it was quelled on Tuesday when Calvin Klein posted a teaser video on its social media platforms, and Bieber confirmed the association later that afternoon by posting that he and Stone will be featured in the brand’s spring ads.

“I have been wearing Calvin Klein underwear for years in hopes of getting to model for the brand one day,” Bieber told WWD. “It’s always been a dream. Last spring, I posted a picture on Instagram in my underwear, using the #mycalvins tag. Thankfully the brand saw it and liked the reaction it was getting, and a relationship started from there.”

He said the Fashion Rocks appearance was an even bigger hint.

“Fashion Rocks was a teaser for sure,” he said. “We had started working together before the show, but they didn’t know what I was planning to do on stage.”

Still, the moment generated lots of buzz for the brand: Bieber’s “strip” turned out to be the most tweeted moment of all of New York Fashion Week last season.

For the spring campaign, Bieber and Stone appear in black-and-white photographs that are reminiscent of the Mark Wahlberg/Kate Moss campaign in the Eighties. The ads were shot by Mert Alas and Marcus Piggott in New York City and feature the duo in provocative poses wearing key looks from the jeans and underwear spring collections.

Bieber said that working with Stone was “incredible. She is such a great girl. Our chemistry came very naturally, and we were both very comfortable. Mert and Marcus shot the campaign and are the best photographers I’ve ever worked with. It was really a magical shoot.”

Stone agreed, saying, “It was really fun working with Justin. I think the shoot really captured the energy of the Calvin Klein brand.”

Although Bieber wasn’t even alive when the Wahlberg/Moss ads debuted in 1992 — he was born March 1, 1994 — he’s quite familiar with the images.

“Of course I’ve seen the Mark Wahlberg/Kate Moss ads. They are over 20 years old and we’re still talking about them today — I was definitely inspired by them,” he said. “I haven’t spoken to Mark about [the new ads] yet, but I hope he will like how they turned out.”

Bieber, who’s never been shy about showing off his body, said he didn’t do anything special to prepare for the Calvin ads.

“I was very diligent about my workouts leading up to the shoot. I have a trainer and work out daily so it was really about sticking to my routine once I booked the campaign,” he said.

And he also didn’t sport any new ink for the spots. “No, I didn’t get any new tattoos for the shoot,” he said.

Whether he’s showing off his tattoos or covering them with clothes, Bieber, like many young men today, embraces fashion as an important part of his life.

“Fashion is very important to me,” he said. “It is a very influential form of self-expression, the same way music is for me. I strive to remain ahead of the curve with my fashion choices and am very grateful that the fashion world has embraced me in the way it has.”

Bieber has been front row at shows ranging from Opening Ceremony to Y-3 over the past several years.

“I love attending fashion shows and being a part of fashion week, and I definitely hope to continue to have the opportunity to do so moving forward,” he said. Even so, he’s not expected to attend the Calvin Klein Collection show in Milan later this month since his association with the brand is only for its jeans and underwear labels.

Although Calvin Klein is a key part of his wardrobe, Bieber is not limited to wearing the brand.

“Recently, I’ve been wearing a lot of different designers in my day-to-day — but am always wearing them over my Calvins,” he said. “I also like the cut of Calvin Klein Collection suits.”

“Justin joins a long list of musicians, models, celebrities and fashion icons that have been featured in our global advertising campaigns,” said Melisa Goldie, chief marketing officer for Calvin Klein Inc. “Justin’s global recognition, expressed affinity for the brand and powerful persona bring a compelling energy to our jeans and underwear brands.”

The spring campaign will be featured in 20 countries and include digital and outdoor ads in addition to print. They feature the hashtag #mycalvins, an initiative created last year to encourage fans to post selfies of themselves in their Calvin Kleins.

The brand is also promising “experiential components timed to coincide with the March 2015 magazine issues.” The final details have yet to be worked out, but this is expected to include musical events.

This campaign will be Calvin’s most digitally focused effort to date with an increased emphasis on social media over print. Bieber was recently ranked by Twitter as the most tweeted about musical artist of 2014. He has more than 150 million followers on his social media platforms.

On a personal note, Bieber said he has no specific game plan for his 21st birthday in March. “No plans yet, but I am sure I will celebrate with friends and family,” he said. And he’s also been busy working on some new music.

“After taking a year off, I’m going into the studio to work on a new album that will come out this year,” he said. “I’m so excited to get to work and create new music for my fans.”

The spring campaign was produced by Calvin Klein’s in-house ad agency in collaboration with Wednesday London.