The ads were shot by Emma Summerton 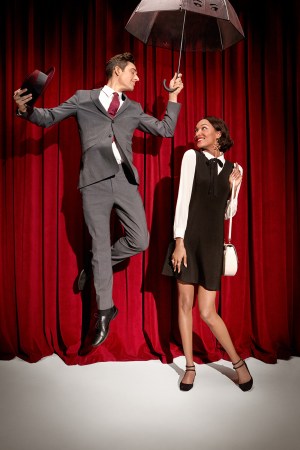 Kate Spade has gathered an eclectic mix of celebrities and models to appear in its fall ad campaign. Singer and actress Bernadette Peters, model, chef and philanthropist Jourdan Dunn, and actress and musician Zosia Mamet, along with a variety of other faces, are featured in the ads, titled “Being the Star of Your Own Show.”

Creating their own cabaret of sorts, the campaign showcases fashion and accessories from the core Kate Spade New York Collection, along with the luxe Madison Avenue and casual Broome Street labels.

The ads were shot by Emma Summerton. Others in the cast include choreographer with the New York City Ballet, Justin Peck; principal dancer Martha Graham, Xin Ying; playwright and screenwriter, John Guare, twins Elise and Julie Marold, and Frosty Austin, a cat. Each of them are stars of his or her own show, giving the campaign an air of individuality.

Deborah Lloyd, president and creative director of Kate Spade New York, said she was excited to work with these talented personalities. “This season we celebrate virtuosos who dream big and inspire us to be stars in our own way. We are excited to share our love of music and performance through our fall collection shown on a brilliant cast of creative individuals.”

The campaign consists of print images photographed in a studio in New York, and portraits and video content for the Web and social media. In the videos, the celebrities dance on a cabaret stage wearing various looks from the line. The print visuals feature individual portraits and group shots of the celebrities in front of a red curtain.

Ads will break in the September issues of such magazines as  Vogue, Harper’s Bazaar, W, Vanity Fair, Elle, InStyle, Marie Claire, New York and Elle and Fashion in Canada. The budget is flat to a year ago.