The actress and CW staple will play Laurel Lance in the network’s upcoming drama “Arrow,” and has signed on as a brand ambassador for Lady Foot Locker. 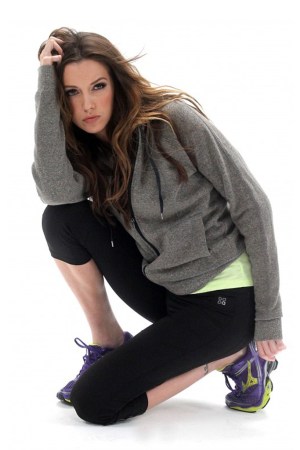 Katie Cassidy has a new role on television and with Lady Foot Locker.

The actress and CW staple will play the good-hearted lawyer Laurel Lance in the network’s upcoming drama “Arrow,” an adaptation of DC Comics’ Green Arrow premiering Oct. 10, and has signed on as a brand ambassador for Lady Foot Locker. The roles couldn’t be more different wardrobe-wise: As Lance, Cassidy is all business in careerwear, while the Lady Foot Locker gig has her in sneakers and track pants.

Cassidy started working out consistently five years ago and chose to partner with Lady Foot Locker because the retailer shares her commitment to maintaining a healthy lifestyle with exercise. “It’s something that gives women more confidence and self-esteem, and it makes us feel empowered. I feel like Lady Foot Locker is also trying to support that and get the message out,” she said.

Cassidy’s varied fitness routine includes running, yoga and hiking, and she tends to opt for comfort over looks in her workout gear no matter what activity she’s doing. “Sometimes I even wear sweatpants, something that makes me feel like I can move and be mobile,” said Cassidy. “I’m not necessarily the girl at the gym in shorts and a sports bra. I try to keep it serious and classy.”

Bringing on Cassidy, who will make monthly product selections on ladyfootlocker.com, as a brand ambassador is one of several moves New York-based Foot Locker Inc. is making to pump up Lady Foot Locker, which has seen sales slip as its store count has been cut to 326 units as of April 28 from 405 two years ago. Lady Foot Locker is expanding its apparel assortment and is expected to test a new store design concept later this year.

“We are excited to partner with Katie,” said Stacy Cunningham, executive vice president of marketing at Lady Foot Locker. “Lady Foot Locker is the destination for stylish, strong, active women, and we are thrilled to have her represent our brand.”

Lady Foot Locker photographed Cassidy last month in Los Angeles sporting its fitness apparel brand Actra. Cassidy, whose father is actor and singer David Cassidy and mother is model Sherry Williams, has had positive experiences modeling dating back to a 2004 campaign for Abercrombie & Fitch she did with Kellan Lutz and Hilary Rhoda. “In that little group of people, we all expanded our careers,” said Cassidy. “It was fun. I became more aware of the fashion world.”

If she could have the closet of any character she’s played, she’d pick Juliet Sharp, Serena van der Woodsen’s nemesis on “Gossip Girl.” “‘Gossip Girl’ had the resources being in New York to access all of the designers. [With] ‘Melrose Place,’ it’s harder when you are in L.A.,” said Cassidy. She singled out a gray, capped-sleeve dress by Alexander McQueen as her favorite piece of clothing she got to wear as Sharp on “Gossip Girl.”

Cassidy will get to show a nicer side on “Arrow.” Her character is “helping underprivileged people who are being taken advantage of, and she’s a go-getter. She will do whatever she can to get whatever she wants. She’s very loving, very real. I think everything in the show, which is great about it, is very grounded,” she said.

Cassidy is also racking up movie parts. She recently finished filming “The Scribbler” with Eliza Dushku and Michelle Trachtenberg in which she is Suki, a woman suffering from multiple personality disorder. “Having to transition on-screen from one person to another was really intimidating,” said Cassidy. “There were seven different personalities that Suki had, the scribbler being one of them, who was developed at a very young age when she was in her crib. The scribbler doesn’t speak.”

Outside of acting and promoting Lady Foot Locker, Cassidy, who described her current style as ‘homeless chic’ and named Phillip Lim, Proenza Schouler, Celine, Alexander Wang, Rag & Bone and Tucker by Gaby Basora as among the designer brands she covets, would like to design her own line someday. “Timing is everything and right now I sort of feel like a sponge. I just kind of want to soak up as much information as I can and when I’m ready or when I have the time, I’d love to focus on that,” said Cassidy, adding that Mary-Kate and Ashley Olsen are inspirations to her. “They’re great business girls and, if they ever wanted to give me some advice, I’d be open to it,” she said.