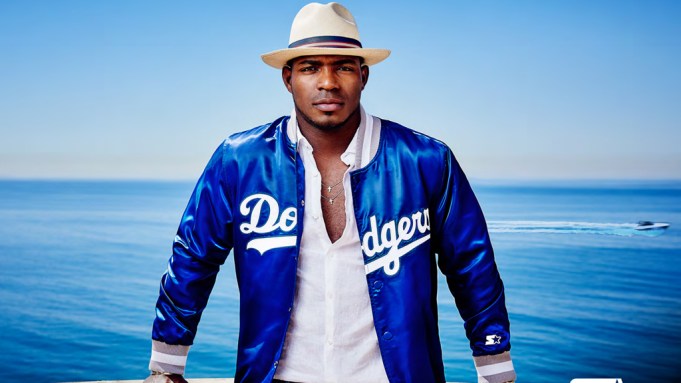 Yasiel Puig is enjoying his moment in the sun.

After escaping to the U.S. from Cuba and landing a reported $42 million payday with the Los Angeles Dodgers, the 24-year-old outfielder is resting his 6-foot, 3-inch, 255-pound frame on a stately chair covered with floral tapestry. For a minute, he’s not concerned with a hamstring injury that’s forcing him to sit out games. His 14-month-old son, who is playing in the background with Puig’s mother, quiets down after a bout of fussiness. He’s also not paying attention to a photo crew scurrying to set up the final shot in the rococo villa overlooking the Pacific Ocean for his new ads with Iconix Brand Group’s Starter division.

True to the theme of the “Jackets Required” campaign, which launches today, he’s showing how a top athlete can remain entrenched in sports while basking in a formal setting. Following in the footsteps of Kevin Love from the Cleveland Cavaliers, who joined Iconix’s team of spokesmen last fall, he slips a royal blue jacket emblazoned with the Dodgers logo over a white vest, black tie, navy button-up, black jeans and Louis Vuitton loafers.

“Very regal,” said Jon W. Johnson, the campaign’s photographer, who has had experience zooming his lens on athletes such as Sergio Agüero and Mario Balotelli for Puma. A few snaps in, Puig rests his chin on his left hand anchored by a diamond-encrusted Rolex for the home run in his fashion ad debut. “Finito,” Johnson tells him, as everyone on set claps.

Puig comes across as an unlikely star for a fashion campaign. He chortles when asked what kind of clothes he liked wearing when growing up in Cuba. “I didn’t have clothes,” he replied through an interpreter, describing his personal style then as “barefoot and no clothes.”

Following numerous attempts to escape the Communist island, he finally succeeded in 2012, when he signed a seven-year deal with the Dodgers. “All that I know to do is play baseball in any country — Cuba, here, wherever — that’s what I love to do,” he said.

Full from noshing on Cuban yellow rice and ropa vieja before hopping on a helicopter that will whisk him across town to Dodger Stadium for a game later that day, Puig explained his affinity to Starter. “I saw the jackets and I saw they were different than any other thing that I’ve seen out there,” he said. “I’ve seen other athletes have worn them. So I liked the opportunity.”

Compared with other sportsmen who treat the walk between the stadium entrance and the locker room as their personal runway, use their Instagram accounts to catalogue their latest high-end purchases and try their hand at designing clothes, Puig has a laissez-faire attitude toward his wardrobe. Prior to working with Iconix, he had done only one fashion shoot with ESPN The Magazine. “I don’t know if that was a fashion company,” the style rookie said with a laugh.

He makes a point of adding a bit of pizzazz to the $80 jackets on the photo shoot, however. Besides his Rolex, a gold chain bracelet and necklaces balance out the bling.

“I wear whatever I like,” he said. “I don’t care if it’s Nike, Adidas, Louis Vuitton, Gucci. I don’t care about that. I’m a baseball player, not a model. So I wake up in the morning and whatever I feel like, I put it on.”

Iconix believes enough in Puig’s style to have him carry the campaign that will run in the print issues of ESPN The Magazine and Sports Illustrated and also online at espn.com, bleacherreport.com and sbnation.com. Complex, Details and GQ will receive both print and online placements.

Puig’s Latin American roots also could help Iconix as it tries to spark sales for Starter in Brazil, Japan and the Middle East from its current base in the U.S. and Europe. In the first quarter, Iconix managed to increase net income by 4.9 percent to $65.9 million even though total revenue fell 17.9 percent to $95.4 million. Moreover, Iconix isn’t vexed at all that Puig has been missing games.

“Injuries happen all the time. You can’t control it,” said Alex Cole, marketing manager for Iconix’s sports brands, which include Umbro and Pony. What’s more, he noted, “he has a great past, a great story. Starter has a rich heritage as well. It seems to be a natural fit.”

Still, that didn’t mean Puig practiced poses for his first fashion gig during his time off.

Referencing the motto popularized by another athletic company, Puig said, “They tell me to pose like this and like that and I just do it.”