L&T’s Strategy: Big in the Burbs

As Manhattan's retail flagships teem with tourists, Lord & Taylor is cultivating the suburbs for its core customer. 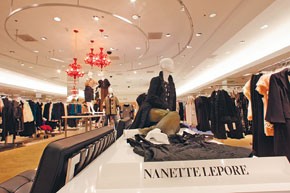 As Manhattan’s retail flagships teem with tourists, Lord & Taylor is cultivating the suburbs for its core customer.

“This is the land of opportunity of Lord & Taylor,” Jane Elfers, president and chief executive officer, said during a tour of the two-level, freestanding 180,000-square-foot unit in Scarsdale, N.Y., just north of New York City.

Ensconced in affluent Westchester County, the 60-year-old Scarsdale store is the chain’s top-volume branch, growing at 6 to 7 percent annually and approaching $100 million a year in sales. It is surpassed only by the 650,000-square-foot Fifth Avenue flagship, which generates just $140 million, far less than other department store flagships in Manhattan.

Lord & Taylor’s branch in Garden City, N.Y., is the second-largest volume unit in the chain, followed by those in Stamford, Conn.; Westfield and Ridgewood, N.J., and Manhasset, N.Y.

“They’re all $50 million-plus stores,” Elfers said, and are freestanding, with the exception of Ridgewood. “They are top performers and offer the convenience of driving right up to the front of the store….There’s an ease of shopping and customers know the associates.”

The chain, which generates volume of $1.4 billion, is profitable, Elfers said, declining to provide specifics. “In 2006, we had the best sales and earnings performance that we’ve had in the last 15 years.”

Instead of building stores, the strategy is to pump up those in operation. L&T’s parent, NRDC Equity Partners, which purchased the chain for $1.1 billion last year, has earmarked $250 million for branch renovations and another $100 million for the flagship. With its excess of selling space, the Manhattan flagship will be downsized and modernized. The company also is spending millions on new image advertising and has revamped its shopping bags with a fresh design.

In addition, Elfers predicted the retailer’s Internet business could reach $100 million in sales within three to five years. “It hasn’t been meaningful, but we are relaunching our Internet presence in the fall,” she said.

The Scarsdale store is the prime example. It showcases contemporary brands and designers such as Seven For All Mankind, Diesel, Iisli, Tracy Reese and Bryan by Bryan Bradley, as well as Cole Haan, Lacoste and Kate Spade, having the cumulative effect of putting a younger, hipper spin on a presentation not everyone would expect from Lord & Taylor if they haven’t visited the store in awhile.

There have been upgrades in fine jewelry, too, with John Hardy and Judith Ripka in the store since Mother’s Day. Scoop Kids arrived this month, and Elfers said the store can’t stock Uggs fast enough.

Key bridge lines are Charles Nolan and Lafayette 148, while dresses include Searle, Badgley Mischka, Magaschoni and Jill Stuart, among other labels. Elfers considers dresses “a franchise business” for L&T. “Typically for department stores, dresses are 2 to 3 percent of the volume,” she said. “We do close to 10 percent.”

However, the addition of contemporary sportswear and denim has been the most profound change. “It’s one of the best-performing businesses in the store. Our customers are looking for it every day,” Elfers said. “Three years ago, you would have been seeing a lot of Tommy Hilfiger, Nautica, Chaps and Izod, and main-floor classifications businesses.”

Certain lines — Kiehl’s, La Prairie, Stuart Weitzman and Seven For All Mankind — that L&T sells in the suburbs won’t be found at the chain’s Fifth Avenue flagship because the labels prefer to sell elsewhere.

But such distribution issues seem to be easing in the suburbs because of retail consolidation. Over the last two decades, scores of chains including I. Magnin, Bonwit Teller, Filene’s, Parisian, Jacobson’s and B. Altman have either merged with Macy’s or gone out of business. That’s brought customers to Lord & Taylor doors by default, with some shoppers missing their former hometown stores and resisting national chains that have swept in, including Kohl’s and J.C. Penney, as well as Macy’s.

“The overconsolidation of regional department stores is and will continue to result in a backlash from the consumer who is searching for a store to call her own,” Elfers said. “There are no better regionals left. We have an ability to micromerchandise to the community. We know the strengths and weakness in our branches. We keep close to them.”

Kurt Salmon Associates, the retail consulting firm, instituted a buyer-planner system in April 2006 to help L&T put the right merchandise in the right locations at the right time. L&T has 200 people in the group.

Another big change has been merchandising selling floors by lifestyle — contemporary, modern and updated classic — encouraging mothers and daughters to come to the store. “They can each find their own zone,” Elfers said.

The retailer was “the first to understand the opportunity in the suburbs, as people started moving out to the suburbs,” Elfers said, noting that Lord & Taylor was the first fashion department store to open a branch in the U.S. — in 1941 in Manhasset. “We have a deep history of being very strong in the suburbs.”

She characterized L&T’s prototypical customer as a suburban woman in her mid-40s, with a $125,000 annual household income. Eighty-eight percent of the customers own a home, and most have two children. Sixty-eight percent of L&T’s shoppers are female, and more than 80 percent are married.

Though the suburban branches, particularly freestanding units, are performing, no additional units are planned. Elfers, however, believes “the potential for the Lord & Taylor brand is untapped….The formula for freestanding stores is very flexible.”

To further beef up the stores, The Yacobian Group has been recruited to help enhance the in-store customer experience. A first step was to install traffic counters in stores to determine staffing needs and conversion rates. L&T plans to gather data for a year and use it to train associates on new selling techniques, how to approach customers, merchandise information, as well as how to maximize staffing. The Scarsdale store is manned by 350 associates at peak periods, and 250 normally.

“Our stores were neglected for so long,” Elfers said. “There wasn’t any money spent. Now we are taking on opportunities, particularly in technology.”

Although growing Lord & Taylor’s Internet presence is a priority, Elfers clearly relishes the brick-and-mortar experience. “I like to see what’s going on, talk to customers, see how the merchandise is,” she said. “You’ve got to get out to understand.”

With that, a woman in her 30s wearing a North Face down coat and denim jeans, approached Elfers and said, “You look important. I want to tell you my mother used to drag me to this store years ago. It was such a mess, but in the last two or three years, it’s completely changed.”