Lancôme Looks to Future With Visionnaire 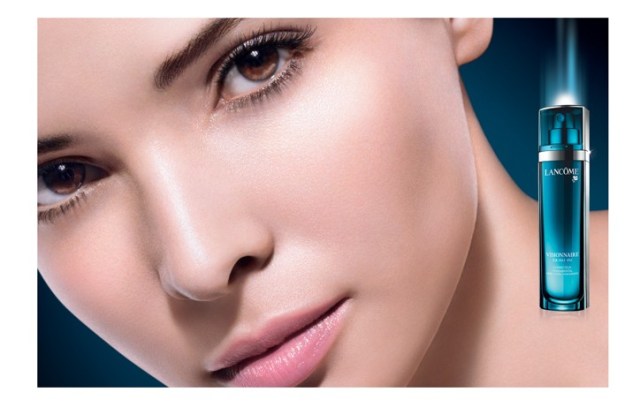 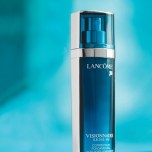 PARIS — Lancôme will launch worldwide in September an all-in-one serum, called Visionnaire, which gives its users “beautiful skin,” according to the L’Oréal-owned brand’s executives.

“This is the future of beauty,” said Youcef Nabi, president of Lancôme International, while describing the product, whose formula includes a new molecule, LR 2412, which is billed to stimulate the production of six markers of the epidermal structure and regeneration linked to aging. “The future of beauty is not made with a molecule that does one thing at a time or 1,000 molecules that do 1,000 things.”

LR 2412 was found while L’Oréal researchers were studying, starting 12 years ago, plants’ self-repair process. They wanted to discover a molecule able to trigger a series of similar reactions in skin.

Lancôme additionally investigated what women currently look for in skin care. Whereas in recent years they might have focused on attaining certain qualities — such as even or glowing skin — today they want it all.

“Women understand that looking younger or having beautiful skin is the sum of many actions,” said Nabi. “They tell us that they use many products. That’s why the layering is getting higher and higher and higher.”

The new molecule “has a profile that has never been seen before,” the executive continued. “LR 2412 is safe for 100 percent of people.” That includes those with sensitive skin, and Visionnaire can be used around eyes and in the sun, too.

“For the first time, they have been able to design a molecule that is also able to go in all the compartments of the skin because it has an affinity with oils and water at the same time,” said Nabi. So it’s totally “bio available,” which is not the case with retinol or caffeine, for instance.

Nabi said Visionnaire, whose effects on skin are both instant and cumulative, works on wrinkles, pores, pigmentary and vascular evenness, as well as on scars.

“It makes, in fact, everything that’s wrong in your skin work better,” said the executive. Visionnaire has been tested on numerous ethnicities, including Hispanic, Asian, Caucasian and black women.

At 4 percent, the serum’s formula includes a particularly high concentration of the LR 2412 active ingredient, which is protected by 17 patents and processed in an environmentally friendly fashion.

Nabi believes the target group for the new product is wide, from 25- to 50-year-olds.

Visionnaire can be used during the day or at night — or both — and alone or under cream.

The product will have the first multiethnic advertising campaign by Lancôme, including images of Arlenis Sosa and Hanaa Ben Abdesslem. It is to come in single and double pages.

Lancôme executives would not discuss projections for the product, but industry sources estimate Visionnaire will generate $100 million in first-year retail sales globally.

In other news, Lancôme announced it is supporting its ambassador Kate Winslet’s Golden Hat Foundation, whose goal is to better the lives of autistic children. Together, the brand and actress developed a limited edition makeup line that will be sold at yearend. Proceeds of at least 150,000 euros, or $212,734, are to be donated to the Golden Hat Foundation.

The Golden Hat color cosmetics collection includes a powder embossed with the foundation’s logo, a reinterpreted L’Absolu Rouge lipstick and some nail polishes in new shades.