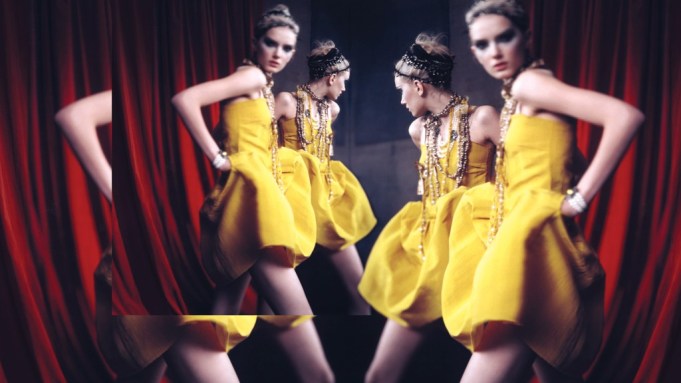 Lanvin has relied on accomplished photographers, top models and sometimes surprising casting to portray its humor, intelligence and elegance — values that founder Jeanne Lanvin held in high regard when she created the label in 1889.

Paolo Roversi, Steven Meisel and Tim Walker are among famous names behind the camera, while Karen Mulder, Nadja Auermann and Raquel Zimmermann are among the top models who have portrayed the house’s upbeat spirit.

Lanvin’s fall 2011 video campaign is a good example of this. Models Zimmermann and Karen Elson are dancing in unison to the beat, with impassive expressions, but constantly changing wardrobes. The campaign, which was art directed by Ronnie Cooke Newhouse of House + Holme and shot by Meisel, became a viral phenomenon. It reached 857,000 views on Lanvin’s YouTube channel. The print campaign echoed the video.

“The editing was very dynamic and people were replicating that video around the world,” recalled Cooke Newhouse. “It was so funny.”

Dynamic advertising is in the brand’s DNA. “Jeanne Lanvin didn’t do advertising, per se. But she used several ways of communications,” explained Laure Harivel, the house’s archivist. “She played a major role in world expos. For instance, she was vice president of the Pavilion of Elegance in 1925. She was presented with the Légion d’Honneur in 1926 for her participation in the expositions, which were relayed in the news.”

Jeanne Lanvin’s communications also included hosting a fashion show on the first trans-Atlantic crossing of the ocean liner Le Normandie, and dressing the top actresses of the time such as Yvonne Printemps, Cécile Sorel and Régina Camier.

“[French stage actor] Sacha Guitry opened the theater world to her. She is very much present in the theater leaflets. Some read ‘actress so-and-so is dressed by Jeanne Lanvin, both on stage and in the street,’” Harivel explained.

Lanvin’s print imagery was often limited to catalogues. When Claude Montana stepped in for spring 1990 (he did five collections from 1990 to 1992), he tapped Roversi to shoot campaigns featuring Mulder.

Theater has been a consistent leitmotif in Lanvin campaigns over the years. “I believe that to Alber [Elbaz], advertising is a way of staging his collections, like a director,” observed Dominique Maneglia, head of advertising and publishing at Lanvin.

Maneglia also noted the repetition of the mirror component in ads, as in Lanvin’s spring 2005 campaign featuring Lily Donaldson.

Dancing is another key theme. Peter Lindbergh lensed Auermann early in Elbaz’s tenure. “Auermann was cast because she used to be a ballet dancer and has kept her dancer’s body,” said Maneglia.

The brand’s casting is sometimes surprising, not only consisting of models. One ad for fall 2012 featured “regular” people, while another shows Jacquie Tajah Murdock, a model in her 80s.

Family is another theme that inspires Elbaz. The fall 2014 campaign shot by Tim Walker featured British model Edie Campbell and her family.

“It is like hanging out with an eccentric English family.…Alber wanted to go back into the idea of family. What does ‘family’ mean?” mused Cooke Newhouse.

In the Lanvin mix, there is emotion and truth, a certain amount of reality, according to Newhouse.

“Fearlessness is important to Alber and myself, trying things that we hadn’t seen. Not so much, ‘This is spring, we went on a trip to Mexico.’ It’s never that! It is the reality of living life.”