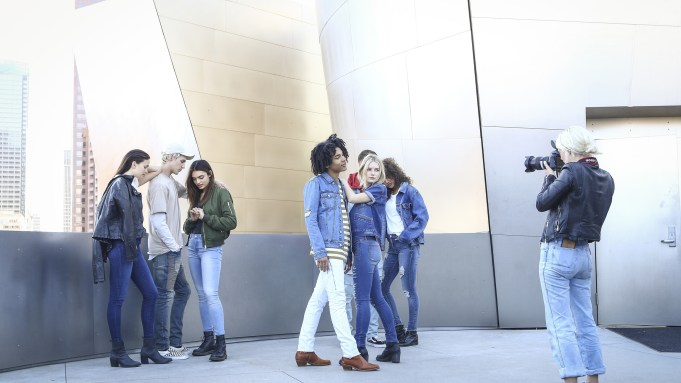 Pacific Sunwear of California Inc. is sliding down the alphabet for the next duo that it hopes will boost its profile and generate sales in a big back-to-school campaign launching July 22. The teen retailer has snapped Lottie Moss and Luka Sabbat (aka Kate Moss’ little sister and Kanye West’s protégé, respectively) to promote the rebranding of its in-house denim line. Renamed from Bullhead Denim Co. to PacSun Denim, the private label is pushing Nineties-inspired styles with the social media-savvy models, who were born just before the start of the Millennium.

“Outside of Kendall and Kylie, it’s our second foray into getting top-tier talent,” said Greg Crawford, PacSun’s senior creative director, who oversees social media and the creative efforts on e-commerce and store design. “We’re banking on Luka and Lottie — who they represent, who they are.”

PacSun is the latest marketer to hitch its fortunes to the rising stars, who together command the attention of more than 355,000 fans on Twitter and Instagram. Following her debut as a 13-year-old bridesmaid at her half-sister’s 2011 wedding to Jamie Hince, Moss traced her sibling’s footsteps to pose in skivvies for Calvin Klein. She also landed the ad campaign for Botkier this past spring and shared the May cover of Paris Vogue with Lucky Blue Smith.

The New York-born, Paris-raised son of a fashion designer and a stylist, Sabbat stood in formation alongside Kylie Jenner last year at the presentation for West’s Yeezy Season One. He has modeled in campaigns for Urban Outfitters’ collaboration with Champion, H&M, Tommy Hilfiger Denim and Adidas Originals, the last of which is still plastered all over Hollywood.

Until the daylong photo shoot in late April that took them on a tour of Los Angeles’ downtown and Eastside neighborhoods, they had limited contact with PacSun. “I’ve never actually shopped there because, you see, in England we don’t have PacSun,” Moss said. Sabbat, whose dressed-down duds included a Raf Simons sweatshirt, Asspizza T-shirt, Carhartt pants and black diamond-encrusted skull ring he designed with Gianni Monini out of solid white gold, said, “I know about them through Fear of God and Been Trill,” the buzzworthy men’s brands that have collaborated with the Anaheim, Calif.-based retailer.

Moss and Sabbat didn’t have points docked for being carpetbaggers who flew from London and New York for PacSun’s paean to the City of Angels. Moss, who grew up in Sussex, England, had been in town only once before. “I haven’t really done the tour of L.A.,” she said. “I think it’d be really cool to do work while sightseeing.”

Besides, Crawford chuckled, “Who is from L.A.? We want the coolest of the coolest who can represent PacSun.” He added that Sabbat is returning for the holiday ads while Moss is in talks with the company to do the same. Plus a design project with them “is definitely on the table in the future,” he said. “We hope to create a relationship with Luka and Lottie as we did with Kendall and Kylie.”

It certainly helped that the rapport between Sabbat and Moss on set was lighthearted and chummy. Adding PacSun to her portfolio of campaigns for Free People and Selena Gomez’s tie-up with Adidas, photographer Harper Smith was instructing them and the five other multicultural models as if they were a modern-day Breakfast Club serving detention on an outside deck at Walt Disney Hall. “Guys,” she yelled to get their attention. “Intertwined energy. It’s about the two of you and how you interact.”

Moving across the concrete slabs, Smith said, “Lottie, give me a little smirk, girl.” To boost morale, Crawford told the group, “These look great, guys. Stick with us.”

After showing Moss the photos that she liked, Smith told Sabbat, “Give me a little chagrin.” “Uh,” he answered, “I forgot what that is.”

Ultimately, Smith didn’t succumb to frustration with her young charges because “they’re supercool,” she said. “Luka, for me, reads a little Basquiat, so I like him in the denim with the long arms and also the stripes.”

Moreover, the 18-year-old New Yorker is “superrelevant” to customers, said Alfred Chang, PacSun’s senior vice president of men’s merchandising and design. “There are only a few guys that guys look up to,” he said. “Luka is definitely one for that generation.”

This is the second time that PacSun is revamping the branding for its private label denim. Before being rechristened as Bullhead, the denim division was known as Tilt. Having produced its own jeans for 30 years, the company now wants to establish itself as a major player in the teen denim market. In its back-to-school collection, it’s checked off all the major trends that have quickly trickled down from the premium denim strata and interpreted them at prices ranging between $49.95 and $69.95: mom jeans, released hems, skinny styles, ripped knees and painted-on pants.

It faces big competition from “anyone that sits in that mall space,” according to Crawford. Specifically, he noted, “The A’s: American Eagle and Abercrombie. Of course, Tilly’s and Zumiez are always going to be on our radar. H&M is doing a lot of business. We intend to steal from them and get our market share.”

What PacSun’s Brieane Breuer wants to avoid is a conversation between teens that goes something like this: “Oh, I love your jeans. Where did you get them?” “It’s Bullhead Denim.” “What’s Bullhead Denim?”

“We have an opportunity to build brand equity,” said Breuer, who is the senior vice president of women’s merchandising and design.

The stakes are high for PacSun, which filed for Chapter 11 bankruptcy in April in attempts to dig itself out of burdensome debt. As of April 7, it operated 593 stores across the country and in Puerto Rico. Its retail network has shrunken from 601 stores as of Jan. 30 and almost 1,000 units in 2006. Total sales fell about 3 percent to $800.9 million in its fiscal year ended Jan. 30 from $826.8 million in the previous year. Excluding gains and charges, the net loss widened to $22.6 million from a net loss of $18.5 million a year ago. In late June, after canceling an asset auction due to a dearth of bidders, it fell under the control of San Francisco-based Golden Gate Capital.

Running for at least eight weeks, the new campaign ranks among the two most expensive marketing efforts for PacSun. Between 2012 and 2014, it rolled out nationwide an ambitious initiative to highlight its California heritage with a “Golden State of Mind” message. Including the marketing dollars for that project’s final push, its overall expenses increased 8 percent to $238.4 million in the fiscal year ended Jan. 31, 2015, from a year ago. In 2015, the retailer began shifting spending from print publications to the digital world. Thus, the photos of Moss and Sabbat and their first-person point-of-view videos will be dispersed on YouTube, Snapchat and Instagram. “That is a big component for the campaign,” Crawford said, declining to disclose the marketing budget.

In a lull at the final segment of the day, as the sun faded behind hilltop houses and a chill seeped across Echo Park Lake, Crawford ordered one of the assistants to “have someone under 30 put on the music.” Loitering on the edge of the water like a gang of young hipsters, which isn’t uncommon in this neighborhood, they drew the attention of a little girl wearing a rabbit-print T and fuzzy orange skirt. “Mommy, they’re making TV,” she said.

Nobody else in Echo Park recognized the up-and-comers, although Sabbat got a few looks from observers on the sets at Grand Central Market and Pershing Square earlier in the day. The comment overheard from one passerby was: “Oh man, I’ve seen him, some fashion dude,” he recalled.

For the final shot at the lake, Moss slipped on a satin burgundy bomber personalized on the back with “L. Moss,” over a bodysuit and blush pink sateen jeans. It was her most conservative look. One of her previous getups at Disney Hall was a slightly faded jean jacket embellished with “L” on the front, which opened up to reveal her pierced belly button and shredded miniskirt. The 18-year-old also used a sun-bleached denim car coat to shield her bare torso and black high-waisted briefs, as tourists climbed the seven flights to admire the view of the skyscrapers and take selfies.

Later explaining her nonchalance with nudity, Moss winked, “You’re not seeing anything. We’ve all got it.”