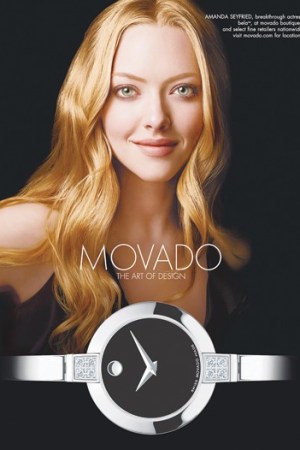 No matter how it’s spun, luxury advertising is struggling this year, with many brands cutting ad budgets, delaying media buys until the last possible moment and planning more targeted buys for late 2009.

This story first appeared in the March 26, 2009 issue of WWD. Subscribe Today.

While all luxury categories have seen ad budget cuts of as much as 50 percent, particularly hard hit has been the watch and jewelry sector, which at this point in the year typically has milestones such as Mother’s Day, Father’s Day and graduations to look for a lift in sales.

At Baume & Mercier, Michael Irilli, marketing manager for North America, said everything will be happening last-minute this year. He said it’s a time for many brands to get “back to basics,” and on that note, the fourth installment of the ad slogan “Baume & Mercier & Me” is back this year with two new brand ambassadors, David Duchovny and “Lost” star Evangeline Lilly. Past campaigns have included Teri Hatcher, Ashton Kutcher, Kiefer Sutherland and Meg Ryan. All royalties for Duchovny and Lilly, as well as the photographers that shot their portraits, are donated to charities.

“We can’t be in every magazine, and budgets are less this year, so we need to make them go further,” said Irilli, whose focus now is the fall and keeping a steady stream of communication with his customers.

“In past years, some have focused on the aspirational — this isn’t the year to do that,” he said.

It’s also, apparently, not the year for Baume & Mercier to take on the Web. “We are not on the Internet, and we have no plans to be there this year,” Irilli said.

Movado, on the other hand, is pursuing an online strategy and developing programs for the Web that will be unveiled later this year.

“There’s a huge opportunity there,” said Mary Leach, chief marketing officer. “But it’s all about how you go about it, while maintaining credibility and authenticity. We don’t want to be doing it simply because others are already there.”

She also intends to focus the brand’s print advertising efforts in the second half of this year, in the hope consumers feel more confident and the economy begins to stabilize.

“[Seyfried] is a great way to talk to a slightly younger female audience,” said Leach. “Everything around us is changing so quickly, but we have developed a reputation of maintaining long-standing relationships with our brand ambassadors. Amanda signed a multiyear contract with us.”

Movado and Baume & Mercier have partnered consistently with celebrities in their advertising, but in general jewelry and watch brands fall into two distinct marketing strategies: featuring only the “product as hero” in an ad campaign or hiring a famous face with which customers can quickly identify. Two years ago, Roberto Coin went the latter route for the first time by hiring Christy Turlington Burns. A spokeswoman said the images quickly became iconic for the brand after running in almost all the major fashion titles, and Coin saw sales of the advertised collections increase 40 percent.

The company has stretched those six images, shot in 2007, to the spring 2009 magazines, and is now planning to shoot Turlington again next month, following Baselworld, for fall books. In addition to print, Coin is also working on a new Internet strategy. Despite a tight budget, the company is creating a template Web page that can be used on a retailer’s existing site, instead of having the retailer build a site around Coin.

Marco Bicego has also signed on a recognizable face for its new campaign: model Bridget Hall. The company previously worked with Bar Rafaeli, but this season opted for Hall, since she is a bit older at 31, closer in age to the average customer. The brand is cutting back on advertising and plans to focus solely on magazines, but its Web site recently relaunched, and now online sales are available on the Neiman Marcus Web site, said Julia Allen, communications director.

Given the widespread print ad budget cuts this year, companies that are already comfortable with advertising online seem to be intensifying their efforts there. H.Stern is using the Web to market its latest watch collection, Sutra Watches. The brand will send online newsletters to communicate directly to consumers, and global retail partners will also use the newsletters in co-op strategies to promote the collection to their clients. H.Stern introduced the collection in late 2008 as part of the Diane von Furstenberg by H.Stern line. While the launch was successful in Europe and the Middle East, selling out at Harrods and at Dubai’s Harvey Nichols, it was derailed in the U.S. by the collapse of the financial markets last September, just as the line was hitting retailers.

H.Stern is reviewing its print ad budget for the remainder of the year, but strategic print ads for watches will continue on a reduced scale. Additionally, von Furstenberg featured the watches in her recent fall runway show, and a spokeswoman said the company is in talks for product placement for TV and film, as well as potential opportunities for cross-branding with a high-end automotive company this summer in New York and Miami.

While many companies are scaling back during the economic downturn, some brands, such as Stephen Webster and Tag Heuer, are forging ahead. Stephen Webster photographed Christina Aguilera for its new international ad campaign, set to launch in May, and Tag Heuer will debut a print campaign with Leonardo DiCaprio, Tiger Woods and Maria Sharapova the same month. At Tag Heuer, the campaign marks the first appearance of DiCaprio, who in January inked a threeyear agreement with the brand. As part of his deal with Tag Heuer, DiCaprio will donate a portion of his signing fees to the National Resources Defense Council, and royalties generated from select Tag Heuer products will also benefit the NRDC.