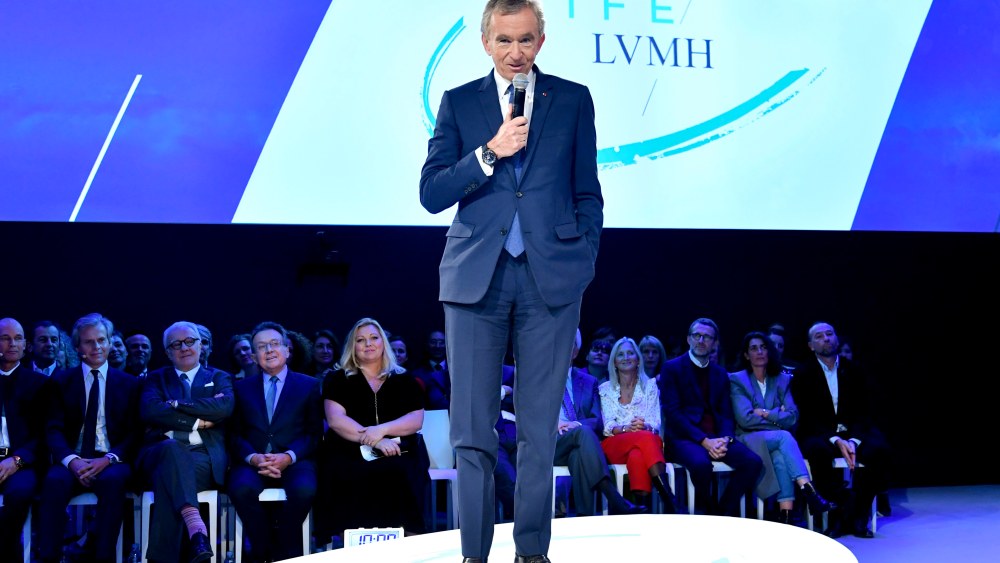 PARIS — LVMH Moët Hennessy Louis Vuitton on Wednesday upped the stakes in the battle for green credentials by hosting a lavish event to celebrate the 25th anniversary of its environmental division.

“Our customers today want to have the feeling when they are buying a product from the group that they are part of something that is good for the planet,” Bernard Arnault, chairman and chief executive officer of LVMH, told a gathering of 300 people at the group’s headquarters on Avenue Montaigne here.

The luxury titan headlined a two-hour program that included speeches by the chief executives of Guerlain, Sephora, Loro Piana and Moët & Chandon, as well as chef Alain Ducasse; Tony Estanguet, copresident of the Paris bid for the 2024 Olympics, and explorer and aeronaut Bertrand Piccard.

Charlize Theron, the face of Dior’s J’adore fragrance, sent a video message in which she commended the brand for initiatives to reduce the environmental footprint of its products. “I am proud because Dior is synonymous with desirability, beauty and sustainability,” she said.

LVMH, which owns fashion brands including Louis Vuitton, Dior and Fendi, said it plans to double its internal carbon funds from next year.

It has invested 6.7 million euros since 2016 in carbon funds, which help businesses to calculate, reduce and offset their emission of greenhouse gases. Sylvie Bénard, LVMH group environment director, said that sum should rise to 12 million euros in 2018.

In addition, LVMH has achieved its initial target of using 10 percent renewable energy and is now aiming for 30 percent by 2020, as well as a 25 percent reduction in carbon dioxide emissions compared with 2013, it said.

Arnault noted that LVMH was the first company in France’s CAC 40 Index to have created an environmental division.

“We have probably been the leaders in our sector for a long time. In fact, we remain the leaders today in environmental protection with regards to the luxury goods sector,” he told journalists in a briefing before the conference.

Companies are vying to burnish their green credentials not only in the fast-fashion sector, which stands accused of harming the environment by promoting excessive consumption, but also at the higher end of the price spectrum, where luxury brands pride themselves on making products that stand the test of time.

To wit, Arnault’s comments came just a day after rival group Kering, which comprises brands such as Gucci, Saint Laurent and Stella McCartney, said it had been recognized for the third time by the Dow Jones Sustainability Indices as the industry leader for the textiles, apparel and luxury goods sectors.

Though he did not mention François-Henri Pinault, the Kering chairman and ceo who has made sustainability a central platform of his group’s strategy, Arnault remarked that LVMH has cared about the environment since its inception, given its roots in wines and spirits.

“For us, it’s not about following a more or less recent or media-friendly trend. In 1992, I remember, when we launched this initiative, we were the first and incidentally, the only ones,” he said.

“Both our employees and our customers are very attached to this aspect of our activity, so it felt appropriate perhaps now to make a shift and talk about it a little more than we have done until now. It’s good to be discreet, but it has certain limits,” Arnault added.

The objectives were set with input from 30 of the group’s brands, out of the 70 that belong to the LVMH Initiatives For the Environment, or LIFE, program launched in 2012. It covers every step from product design to retail operations and is now a required component in the strategic plans of all LVMH brands.

Other objectives include increasing the use of leather from tanneries certified by the Leather Working Group, a multi-stakeholder group that promotes sustainable and appropriate environmental business practices within the leather industry, to 70 percent of the total.

“As the leader in luxury, we have the responsibility to be the best in this field and also to show that the protection of the planet is not incompatible with the economic, innovation and creativity aspects that are very central values for the LVMH group,” said group managing director Antonio Belloni.

Arnault noted the initiatives come at a cost. “It represents an investment, that much is obvious, but it yields benefits in the long term,” he remarked.

Among the examples highlighted by group executives were Guerlain’s redesign of the packaging of its flagship Orchidée Impériale face cream, which resulted in a 58 percent reduction in the product’s carbon footprint, and Sephora’s plan to install LED lighting in all of its 2,400 stores worldwide by 2020.