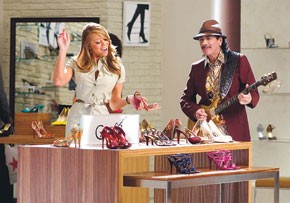 Highlighting the chain’s variety of merchandise is a primary goal. And though Stewart and Trump are never together in the spots, they suggest that Macy’s is big enough to accommodate the clashing personalities.

“We want to create more awareness of the Macy’s brand nationally and show the consumer that we have some brands they may not yet know about,” said Martine Reardon, executive vice president of Macy’s Corporate Marketing.

In their commercial, Santana, the iconic guitarist who fuses rock, jazz, blues, soul and more, and pop princess Carey bond over stilettos from Santana’s line of sexy footwear.

“I always said shoes are like women,” Santana remarks. “They inspire beautiful music.” He plays a guitar riff and Carey begins humming. “What does my fragrance inspire?” she asks, spritzing. “Mmm, that’s got soul,” Santana replies. Donald Trump, who is the comic foil in the commercials, says, “My ties are beautiful. They don’t need music.”

Aubry, the Calvin Klein model and companion of Halle Berry, stars in the second commercial as a first-day Macy’s employee. Women swoon as Aubry is led through the store by a manager. Stewart drops the plate she’s holding when she reaches to shake his hand and checks out his butt. Carey, who is at the fragrance counter, murmurs “Oh, my” as he walks by. The camera cuts to Trump, who deadpans, “So very shallow.”

The commercials, directed by Barry Levinson, who won an Oscar for “Rain Man,” carry the tag line: “Bringing the stars together. That’s the magic of Macy’s.”

The retailer is “trying to showcase more of the store,” Reardon said. “Fragrance is a very important part of our business, as is women’s shoes. Calvin Klein is a very big partner. It’s in home, fragrance, juniors, women’s and men’s. Martha is a very important brand for us, exclusive to Macy’s. She just launched a new line of Wedgewood china. Donald Trump is also a great partner. His men’s furnishings business is very strong.”

The commercials will air nationally on networks, cable and in syndication. The Carey-Santana spot, which was also filmed in Spanish, will air on Telemundo, Univision, Galavision and Azteca.

Reardon dismissed the idea that the celebrities are highly paid. “These people are our business partners, so they want to do it for us,” she said. “It’s exposure for their brands.”

The campaign comes as the more than 800-store chain posted total sales of $1.28 billion for the four weeks ended Feb. 2, compared with $1.78 billion in the five weeks ended Feb. 3, 2007. The 28.4 percent decrease was primarily attributed to one fewer week in the January period versus a year ago. But Macy’s same-store sales were down 7.1 percent in January, on an apples-to-apples basis.

Reardon sees the commercials as more than just an ad campaign. “It’s the DNA of the brand and how we differentiate ourselves,” she said. “Our plan is to continue the ads. There may be other categories and some other designers. Tommy Hilfiger will be [launching] men’s and missy exclusively in August. He’ll be a very big part of what we’re doing.”