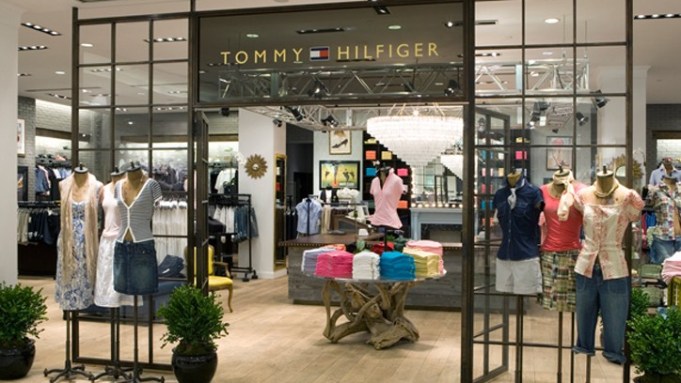 For a week starting Sept. 7, Macy’s will become Tommy Town.

The retailer is gearing up to capitalize on its arrangement to sell Tommy Hilfiger women’s and men’s sportswear collections exclusively, with the exception of the Tommy Hilfiger stores. Since forging the pact last year with Apax Partners, the Amsterdam-based owner of Hilfiger, Macy’s has deepened assortments of the brand, added space per store, renovated 300 Tommy men’s and women’s in-store shops, and has grown the brand’s distribution to more than 500 doors from 350.

For visual impact, “strike points” composed of mannequins grouped on main aisles and common areas will spotlight sportswear cross-merchandised with non-exclusive licensed products such as accessories and handbags. And Macy’s at Herald Square as well as State Street in Chicago will be rigged with technology projecting Tommy imagery streaming from window to window and visible day and night.

“You won’t be able to walk anywhere in the store and not know something big is happening with Tommy,” said Martine Reardon, executive vice president of marketing for Macy’s Inc.

The presentations will be most intense at the Macy’s flagships at Herald Square and on State Street, as well as those on Union Square in San Francisco and in the Dadeland Mall in Miami.

But a battery of tactics is about to be unleashed nationally, amounting to an unprecedented marketing blitz for a single apparel designer. Macy’s Martha Stewart Collection was the chain’s largest launch for a brand, though Tommy represents Macy’s biggest introduction on the apparel side, according to Reardon. She declined to specify the marketing budget or volume anticipated. Macy’s last year did about $250 million in Hilfiger sales.

The tactics for Tommy week include:

• Print and online campaigns, plus a new TV ad on the Emmys Sept. 21, with Hilfiger the main character and celebrities who create product for Macy’s.

• The launch of a men’s fragrance called Hilfiger on Sept. 7. Macy’s has a 30-day exclusive.

• Tommy’s “favorites,” items he considers must-haves, will be displayed prominently and changed monthly for a better flow of newness. They’re often basics and signature items that have been remade, such as Oxford shirts, colored anoraks and colored denims.

• Hilfiger will appear at Macy’s Herald Square on Sept. 9 with “a happening” band, Reardon said. His portrait, with Fourth of July fireworks in the background, is already in the store alongside those of Donald Trump, Christina Aguilera and Martha Stewart, who also provide exclusive products. They were all photographed by Mark Seliger.

• A Tommy sitelet on the Web goes live this week.

Inside the Hilfiger company, “classic American cool” has been the fashion mantra, according to Avery Baker, executive vice president of global marketing and communications. “We’ve been really evolving the product offering. We’ve upgraded the quality and fabrics and reinstituted a lot of the details. With this partnership, we are able to create so much more of an impact with the whole brand presentation.”

“There’s a new sensibility of what Tommy is all about — preppy, collegiate, lots of plaids, trenchcoats, as well as long dresses and elegant pieces,” Reardon said. “There is more risk-taking with some pieces. The collection has a little bit for everybody, though it’s a little more edgy.”

The collection includes dresses, activewear, jeans, dressy pants, blouses, T-shirts, sweaters, vests and underwear. While Macy’s has the Tommy apparel to itself, the store does have to share the license products with other retailers. That would seem to be a source of frustration, but, Reardon said, “The men’s and women’s are the guts of the business. That’s where Tommy started.”

As a close partner, Tommy Hilfiger becomes a critical piece of Macy’s program for fall, which is certain to be a season of kicking and biting for market share as the economy worsens. At retailers across the board, fierce discounting is expected well before Thanksgiving, the traditional start of holiday promoting.

Macy’s hopes to rise above the cacophony by raising the exclusivity pitch. Aside from Hilfiger, other proprietary programs such as Martha Stewart, Donald Trump, INC, Charter Club and Hotel Collection will play big roles. So will Luna, Macy’s first designer-driven private label jewelry line, officially launching in early October. The designers behind Luna are from Faraone Mennella, a fine jewelry collection sold at high-end stores such as Bergdorf Goodman and Saks Fifth Avenue. Macy’s also hopes to get a lift with its 150th birthday celebration, which runs through October and entails special visuals, advertising, shopping bags, special events and much vendor participation.

Macy’s claims about a third of its merchandise is exclusive or near exclusive, but the goal is to exceed 50 percent. The May Department Stores Co. acquisition of 2005 doubled the size and buying power of the corporation, and enabled it to accelerate efforts to procure and develop exclusive merchandise and advertise collections nationally. The strategy also involves focusing on fewer, more important vendors, particularly those that offer something special. The Hilfiger campaign could go a long way to validate the Macy’s strategy, and encourage other brands or designers to sell exclusively to the retailer.

At the same time, Apax is counting on Macy’s to help turn around the Hilfiger business in the U.S. In recent years, most of the brand’s problems have centered on women’s products.Men’s wear has sold better. Along with the quality, Apax has been elevating the price points, cutting jobs, bringing some of the licenses in-house and opening large stores in prime locations, such as on the Rue du Faubourg Saint-Honoré in Paris and on London’s Regent Street. A 22,000-square-foot flagship is set to open on Manhattan’s Fifth Avenue in the fall. There are more than 50 Hilfiger retail stores and 150 outlets in the U.S. Total sales did grow 14.4 percent to $1.88 billion in the latest fiscal year, but growth was mostly due to stronger retail and wholesale business in Europe. Macy’s will make the difference in the U.S.

“The launch of Tommy week at Macy’s will be a fantastic start to our exclusive strategic alliance,” said Hilfiger. He added his business has performed “exceptionally well” this year at Macy’s and considers next week’s relaunch a natural extension. “Throughout the season, we expect the momentum to grow as we continue to roll out brand new shops and elevated product offerings.”�