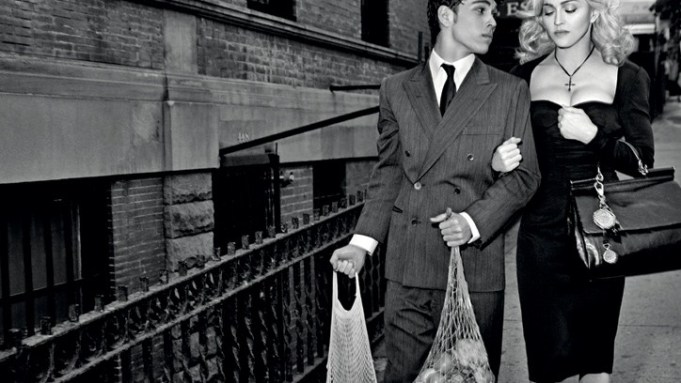 The star appears grocery shopping at the local market, à la the classic Italian film “Mamma Roma,” while other ads feature her at a family Sunday lunch, an intimate moment in the bedroom with her newborn daughter and waiting while her grandmother alters the hem of her skirt.

Stefano Gabbana described the fall images, a sequel to the brand’s film-inspired spring campaign with Madonna, as the “second half of the first movie.”

“We wanted to continue pushing our current message that shows fashion’s more human nature and our heritage. This is yet another tassel of that mosaic,” said Gabbana.

Madonna also appeared in the campaign for MDG-branded eyewear, a co-designed line produced by Luxottica.

Once again shot by Steven Klein in New York’s Harlem, the idea behind the black-and-white images is to reveal a woman’s more down-to-earth dimension and natural beauty. “We believe the campaign is comforting and that people will somehow identify themselves in the images, which again display a more human and approachable side of Madonna,” said Gabbana. The images break on July 13 in the U.S.

Most often swathed in black lace, Madonna dips into an imaginary film where she interprets a woman who is at once mother, daughter, cousin and sister in the simplicity and beauty of everyday family life, Italian-style.

“It’s a testament that fashion is part of life and not vice versa,” said Domenico Dolce.