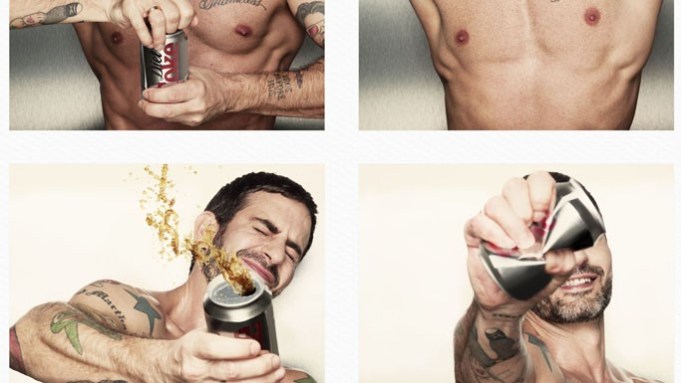 PARIS — “I think glamour and sex sells just about everything.”

So said Marc Jacobs, whose turn as Diet Coke’s new creative director for 2013 will have him stripping in a photo booth and posing in playful, pin-up-style ads.

Revealing the collaboration exclusively to WWD, Jacobs said he designed “whimsical, feminine” packaging for the soft-drink giant as it celebrates its 30th anniversary in Europe.

The first cans and bottles are slated to arrive next month in 11 European markets including the U.K., France, Benelux and Iceland. Jacobs had a hand in three cans, three bottles and three ad campaigns, each corresponding to a recent decade in fashion.

The creations, to be unveiled later this month, reference iconic looks and female empowerment from the Eighties, Nineties and Aughts, along with signature Jacobs motifs. He hinted they would incorporate fashion illustrations and repetitive prints, and confessed that he also tinkered with the Diet Coke logo.

“We wanted it to be colorful and fun,” the designer said.

Stéphane Sednaoui shot the campaigns — destined for print, outdoor and digital from mid-March — and Jacobs said he was excited to work with the photographer, having first met him at a PJ Harvey concert and long been a fan of his music videos for artists including Red Hot Chili Peppers.

A short film winks to Diet Coke’s popular “hunk” ads from the Nineties, recently reprised with a new commercial featuring a gardener who doffs his soda-drenched shirt and wrings it out. The film will make its debut on YouTube and Diet Coke’s Facebook page.

Famous for his rippling, tattoo-covered physique, Jacobs is depicted in the film causing a commotion in a photo booth, inviting three women to join him and share his Diet Coke moment.

“I still think it’s hysterical people want me to take my shirt off. You know, I’m going to be 50 in two months, so I guess I should be glad,” he said with a chuckle, musing, “It feels like the decade of me taking my shirt off.”

“I have this thing about icons and legends,” the American designer said, listing Coca-Cola, Mickey Mouse and Louis Vuitton among them.

Jacobs is a longtime consumer of Diet Coke. In crunch time ahead of his signature show in New York on Monday, and his Vuitton show in Paris on March 6, Jacobs said he’s “pretty good about” keeping his soda intake to two or three a day. “Everything in moderation,” he teased.

Asked to account for the fact that even drink-makers turn to people like him, Jacobs replied, “It’s just another proof of people loving the power of fashion.…Designers have personalities, and their clothes have a voice and a vision, and people respond to it.”

Additional details of the “Sparkling Together for 30 Years” initiative are to be unveiled at a launch event in London on March 11, with Jacobs expected to attend. Introduced on the continent in 1983, Diet Coke has since been consumed by more than 2.7 billion people in Europe.