Marcolin’s Message: Through the Years

The company has strived to convey its technical expertise alongside the images of its licensed brands. 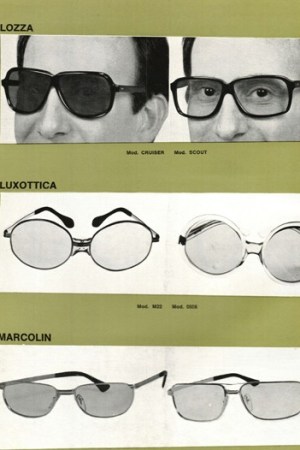 The power of persuasive communication and effective imagery has never been lost on Marcolin.

The company’s advertising campaigns over the years ranged from highlighting the shape of the glasses with a graphic and colorful effect in 1968, to still life images in 1971 and a pensive model gazing into a mirror in 1973.

Marcolin even explored early versions of comparative ads starting in 1977, touting how it offered “a little bit more” than other companies in terms of creativity, technology, quality-to-price ratio and service.

In 1978, rather than focusing on pretty models, the firm highlighted its technical prowess and direct relationship with opticians, showing one such specialist in his white lab coat, standing next to a microscope and surrounded by blurbs about his requirements, including top service — and correct and educational advertising.

In a nod to its customer, Marcolin then reformatted the ad with the image of a man and a woman and copy reflecting their needs, with a claim about knowing and understanding “the public.”

In 1979, in a more international approach, the company’s messages began appearing in Italian and English. At the same time, however, Marcolin also started showing some cleavage and models with a come-hither look.

In the early Eighties it ventured outdoors in Venice for a carnival-themed campaign and models posing languidly along the canals.

Today, Marcolin’s communication hinges on its licensees and their own messages. The brands work on images that carefully reflect their style and design inspiration, as in Tom Ford’s sleek portraits and Montblanc’s sophisticated settings.

“With eyewear, it’s especially important to create a mood,” said Dan Caten, who designs the Dsquared2 line with his twin brother, Dean.

“We had this idea of [Disney cartoon character] ‘Chicken Little,’ with gigantic frames, a quirky look, an androgynous and exotic model, with blonde hair, dressed like a man. It’s about going to extremes in terms of size, hair and pushing the contrasts, so the end result is something you would never have expected,” said Caten, who tapped Mert Alas and Marcus Piggott to photograph model Fei Fei for the brand’s spring 2011 campaign.

The eyewear category is especially relevant for the designers.

“It’s the cherry on the cake, and it helps convey an attitude and emotion,” Caten said. “We always have our runway models wear them in our fashion shows, too.”

He noted that the farmer’s theme on the women’s catwalk in February will be reprised for the fall campaign, also shot by Alas and Piggott. Dsquared2 signed its licensing agreement with Marcolin in 2008.

“I chose Laetitia to front my eyewear ad campaign, as the beauty of real women has always inspired and attracted me,” said Cavalli. “Sunglasses have become a fundamental accessory in the look of a woman who wants to appear free, sensual and elegant, with a touch of mystery, in the summer as well as in the winter.”