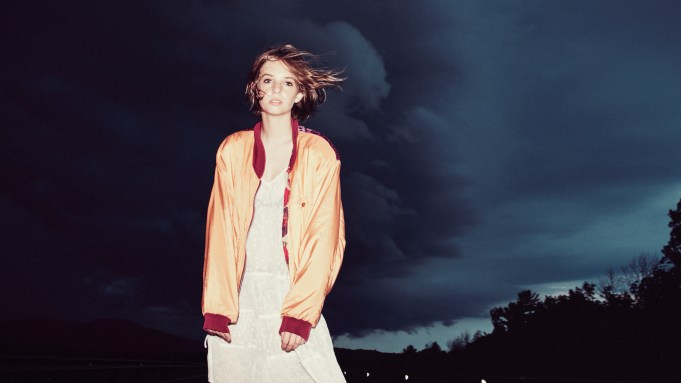 MAYA’S MARK: Maya Thurman-Hawke has become the face of AllSaints. The daughter of Uma Thurman and Ethan Hawke has made her modeling debut in the British label’s spring 2017 campaign and short film.

The advertising campaign was shot by Matteo Montanari in Woodstock, N.Y., the model’s hometown.

The film, which is just under two minutes long, was shot by Robert Nethery and directed by AllSaints creative director Wil Beedle is called “Far From Here.” It begins with a voice over, with Thurman-Hawke expressing that she is “insecure about this.” The 18-year-old is dressed in items such as a white cotton dress with lace detail, a biker jacket, a leopard print jacket and a floor-grazing white dress.

“Making a short film together, in and around Maya’s hometown of Woodstock, came naturally because the mood of the area is so evocative of pastoral escapism and all the possibilities of love, youth and endless summers,” said Beedle.

“The collection itself is as much about escapism as the film we made with Maya. The starting point was about escaping the city in search of nature — exploring and contemporizing pastoral textures such as dentelle and broderie anglaise. But before long, the collection had also taken us from the countryside into the youthful innocence of the stars and outer space.”

Thurman-Hawke said: “Wil designs clothing for women. Instead of trying to design women for clothing. The dresses fall just where you want them to, and don’t keep you from running or dancing. All his clothing inspires a rare lack of self-consciousness.”

“Anyone who spends any time with Maya will tell you that she’s smart, cool and possesses an infectious enthusiasm for new ideas, the creative process, and life in general,” Beedle said.

“And as the title suggests, making this film with Maya is a conscious decision to escape from the city and New York’s increasingly overcrowded fashion week. Taking a trip up to Woodstock with Maya to capture the collection in the environment that inspired it — and then share it a week later with the world — felt more appropriate, more free, more now.”