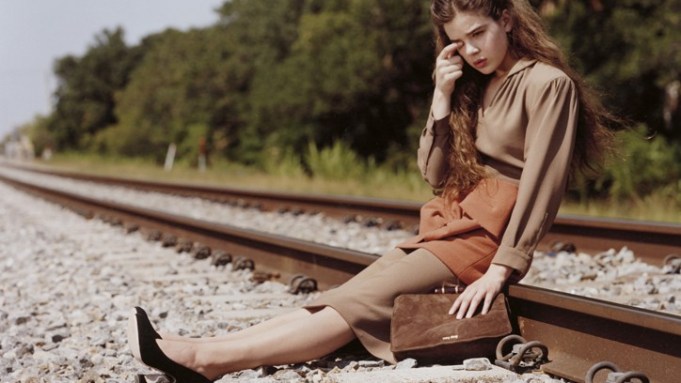 MILAN — Miuccia Prada has returned to featuring a high-profile actress for her Miu Miu ad campaign, this time signing Hailee Steinfeld. But for the first time ever, Prada tapped Bruce Weber to interpret a Forties “film noir” mood.

Steinfeld was chosen for her unconventional elegance and her ability to carry off the grown-up and elegant silhouettes with a whiff of Forties that made up the fall collection. The studied studio images of past seasons have given way to a more relaxed and open-air vision for which Steinfeld is shot outside in Miami, sitting on or standing near train tracks and surrounded by lush green vegetation.

Dressed in an elaborate top over a skirt or a sumptuous dress with sprays of blossoms and sporting glittering heels or a suede clutch, Steinfeld wears her long auburn tresses slightly pulled back, her face hardly made up.

The images just broke in Italian newspaper Il Corriere della Sera and will be in international magazines in July. Miu Miu declined to reveal its ad budget for fall.