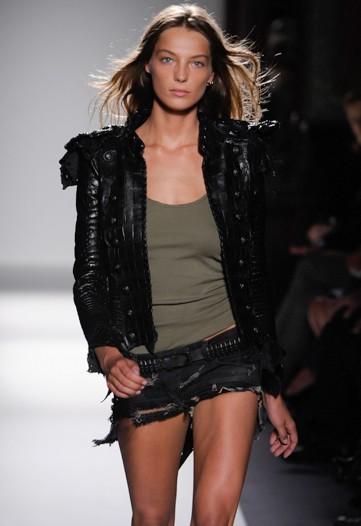 PARIS — When it comes to fashion modeling, it’s a job better left to professionals.

That seems to be the prevailing logic as European designers shoot their fall-winter campaigns: Models continue to trump celebrities by a wide margin, suggesting the industry’s dalliance with Hollywood during the luxury boom is losing its cachet. Meanwhile, American houses almost always have favored models over celebrities in their ads, a trend likely to continue for fall.

In fact, it might nearly have been a clean sweep for models had Domenico Dolce and Stefano Gabbana not tapped Madonna, with whom they collaborate on eyewear, for a second season.

“What I need to focus on is an attitude, and this comes from a great, experienced model,” said designer Stefano Pilati, who is shooting Yves Saint Laurent’s campaign here today with Daria Werbowy. “[Models] can feel the clothes and make them relevant from a fashion point of view.”

“I think it’s a very contemporary approach,” agreed Frida Giannini, the creative director at Gucci, who tapped statuesque Raquel Zimmermann for the Italian brand’s fall-winter spots. “The other issue with celebrities is that they are characters who are often associated with a certain film. I prefer a strong, generic face that’s not related to any world — whether that be music or Hollywood.”

Giannini said celebrities can work for special products, citing as an example Rihanna’s appearance in a Gucci campaign in 2008 for a UNICEF fund-raising effort, or James Franco’s role in a men’s fragrance campaign.

“[Franco] worked, and I’m glad we did it. We used a model for the Flora campaign and that worked, too,” Giannini said. “There isn’t a hard and fast rule, but I think you have to take into consideration what sort of message you want to communicate and who the target consumer is.”

Karl Lagerfeld, who shoots enough campaigns to represent his own focus group, selected models for the Chanel (Freja Beha Erichsen, Abbey Lee Kershaw and Brad Kroenig); Fendi (Anja Rubik and Baptiste Giabiconi), and Karl Lagerfeld brands (Iris Strubegger and Giabiconi). “Why? Because I love them: They have the right look and class,” said the multitasking designer.

Erichsen, for example, has become a regular at Chanel, including for next season’s eyewear campaign. “I just think she is the most modern girl and the most elegant person,” Lagerfeld enthused. “Anja is also in the second season at Fendi. She is also a great girl: So right, so modern, like Iris.”

The only exception to Lagerfeld’s models-only casting is Vanessa Paradis, a Chanel ambassador who will appear in a handbag campaign this summer in addition to her role as the face of Chanel’s Rouge Coco lipstick.

Lagerfeld notes there are “not so many” celebrities around from which to choose. What’s more, their “overexposure in ‘people’ magazines also makes it that one may be a little tired of celebrities and the red carpet. I love models and there are great ones for the moment.

“A change was needed,” he continued. “Celebrities want to do their own lines, their fragrances, which sometimes works for a short time.”

To be sure, fashion and fragrance brands have had mixed results with celebrities — examples range from Angelina Jolie for St. John to Scarlett Johansson for Louis Vuitton — and rarely have associations been lasting. Tilda Swinton is back for a second season at Pringle, but Vuitton has lately returned to models.

“Celebrities have been used so much without reason. Today it’s no longer relevant to use a celebrity just to endorse a product,” said Ogilvy & Mather Paris art director Antoaneta Metchanova. “Fashion brands are starting to realize that in order for a product to make an impact, a model would better suit the task. Leave the modeling to the models and work with celebrities when the idea makes sense or when there’s a story that a particular celebrity could help tell.”

Robert Ferrell, director of Marilyn Agency’s celebrities and branding in Paris, noted stars can be very impactful in advertising, “but they have to make sense and they have to be believable. It’s not because you win an Academy Award it’s going to generate sales for the company.”

Ferrell said the economic crisis surely played into the waning use of celebrities, as budgets easily “double or triple” when a star is involved. What’s more, bankable celebrities are scarce and “you have to understand that that movie star might have one hit movie and then a dry period.”

Today, fashion brands are driven by “sure values” and often head to seasoned and bankable models like Kate Moss, Naomi Campbell, Claudia Schiffer and Eva Herzigova, all on the Marilyn roster, Ferrell noted. “Especially in this economic environment, brands are definitely looking to get more out of their investment.”

For his fall-winter campaign, shot by Mert Alas and Marcus Piggott at dusk in Palm Springs, Roberto Cavalli again called on Gisele Bündchen.

“We chose to use her again because she is part model, part celebrity and she is very special,” said Eva Cavalli. “Celebrities tend to overshadow the clothes and are fine if they appear in a house’s campaign only once in a while.…It’s easier to transform models, and I think they interpret the clothes better — especially the more seasoned ones. It’s not only a question of beauty, but of character. We used Sasha Pivovarova, for example, in the Just Cavalli ads, and in front of the camera she is amazing and totally transforms.”

Although he once put some French actors and actresses into a YSL campaign shot by Juergen Teller, Pilati said he generally prefers top models, who have the ability to transform a simple pair of trousers into a covetable fashion item.

“Actresses are fantastic, but they’re not models and it’s not easy,” Pilati explained. “[Actresses] have an attitude, but will never be the fashion attitude. To me, fashion photography is with a model; otherwise, it’s a portrait.”

In Pilati’s view, a successful fashion campaign captures a “dialogue” among professionals. “I do the fashion. They, the models, know how to wear it, and the photographer knows how to take a picture of it,” he said. “It’s where the fashion dream comes from.”