The trade show’s aisles were chockablock with novelty. 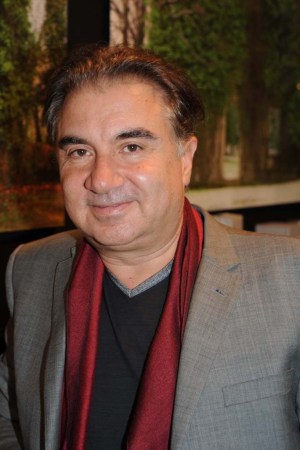 Euroitalia was featuring Bright Crystal Absolu from Versace, which was launched in Italy last month.

“This is a good year,” said Giovanni Sgariboldi, company president, who added Euroitalia could end the year with business up in travel retail between 15 percent and 18 percent.

Each brand has big projects on deck for next year. John Richmond, for instance, will introduce a masterbrand in spring. The fragrances’ bottle shapes are inspired by iPhones, according to a company spokeswoman, who explained the project is meant to target younger consumers.

Meanwhile, Euroitalia continues the rollout of Moschino’s Chic Petals and Forever Sailing and will introduce for the brand a new women’s scent.

Perfume Holding is better poised to build its travel-retail business, especially with a brand such as Ferrari with its Essence collection and Red Power scent, believes Enrico Ceccato, Perfume Holding chief executive officer. He added Atkinsons will be a good target for the channel, as well.

Perfume Holding plans to open its travel-retail operations in at least 10 countries next year.

“Our pace is increasing,” said Ceccato.

Among the key launches for Beauté Prestige International next year will be L’Eau Couture for Elie Saab. There is to be a new communication campaign for Issey Miyake fragrances and also a third Pleats Please scent, called L’Eau.

“For Issey Miyake, the big launch of the year will be a new masculine line,” said Delphine Pellerin, operational marketing brand manager for travel retail at BPI.

A new men’s floral woody fragrance, called Narciso, will come out within the Narciso Rodriguez portfolio.

Inter Parfums SA is gearing up to launch a new Balmain fragrance and a Lagerfeld duo that is due out in mid-March 2014, said Philippe Benacin, the company’s chairman and ceo. There are also a second Montblanc men’s fragrance and a men’s Jimmy Choo offer to come in 2014.

Intertrade Europe Group is registering strong growth — up 25 percent on-year. Its ceo, Celso Fadelli, said he has noted a rising interest in high-quality products with a true concept and support backing them.

Fadelli said Intertrade —which is in 52 markets with 400 to 500 doors — just began a partnership in Russia and this month is opening in Rabat, Morocco in a fragrance concept store called Jovoy.

At TFWA, Intertrade was showing all its brands, including Agonist, Roads and — for the first time internationally — Azagury, the British couture designer whose six fragrances should be ready for delivery in the middle of this month.

Another focus for Intertrade is possibly a new retail concept that takes a cue from its Avery Fine Perfumery shop in London, “so to have products that can fit around perfumes in a coherent way,” said Fedelli. He explained these would be high-quality items fitting with fragrance in a lifestyle fashion.

Fedelli said he would not be against opening in travel retail under the right conditions, which would include being able to create a space as a shop or a special area within a shop “where you can really bring people on a journey of our perfumes. If somebody wants to open a specific shop, I’d never say no.”

Building on the success of its Signorina fragrance, Ferragamo Parfums in the first quarter of next year will introduce Signorina Eleganza.

The scent will be backed by an advertising campaign featuring the model Anja Rubik.

Also upcoming for the group is Essenziale Bleu, a spicier version of the Acqua Essenziale men’s scent. Launching in April, it is meant to target a sporty, sensual man.

The Tuscan Soul Quintessential Collection, four fragrances that mark Ferragamo’s entry into the niche fragrance category, comes out exclusively in the brand’s boutiques starting in mid-November.

To be introduced in travel retail beginning in the second half of 2014 will be a collection of mini Ferragamo fragrances whose bottles resemble spinning tops. Three were inspired by the Signorina universe and two take a cue from the Incanto family. Their outer box resembles origami.

AmorePacific, which began its international travel retail business in 2009, plans to launch its Lolita Lempicka and Annick Goutal fragrance brands in the channel starting in 2015, said Jung-Hoi Moon, a staff member on the company’s international travel retail team, part of the luxury business unit. He said AmorePacific’s goal is to become a top-seven global beauty company by 2020.

In travel retail, most of the firm’s business is generated in Asia, but Moon said it’s trying to penetrate Europe and the Americas, where in the near future AmorePacific plans to have a counter in a Los Angeles airport.

Shiseido has been taking an increasingly multibrand approach to travel retail. Alongside rolling out Clé de Peau Beauté, it is expanding the distribution of Nars, Bare Escentuals and Serge Lutens in the channel.

At TFWA, Shiseido highlighted numerous launches, including a serum, day cream emulsion and body cream for Future Solution LX that are due out early next year. Upcoming, too, is a foundation including Shiseido’s Super-Veil 360 sun protection, an eye product for Shiseido Men Total Revitalizer and a new visual for Shiseido Men to fete its 10th anniversary in 2014, according to Florian Hanhausen, vice president of marketing and communication at Shiseido.

Skin-care brand 3Lab had numerous travel retail-related meetings at TFWA, although it’s not yet sold in the channel.

“It is something we really want to get into, and we’re working on finding the right partner now,” said Christina Oresajo, communications and marketing coordinator at 3Lab, adding the time is right since the label has brand recognition.

At the trade show, 3Lab was showcasing its Super Trio of products and an Aqua BB tinted moisturizer in compact form, which will be launched probably starting in March as a limited edition to mark the company’s 10th anniversary.

For its part, Ahava was highlighting its Dead Sea Osmoter Concentrate.

Bourjois is making a major push into travel retail after about a decade.

Black Up noted heightened interest from airport operators at this session of TFWA, said Clothilde Lambadarios, its international sales manager. The brand, which caters to women of color, has recently entered airports in Mauritius and Casablanca.