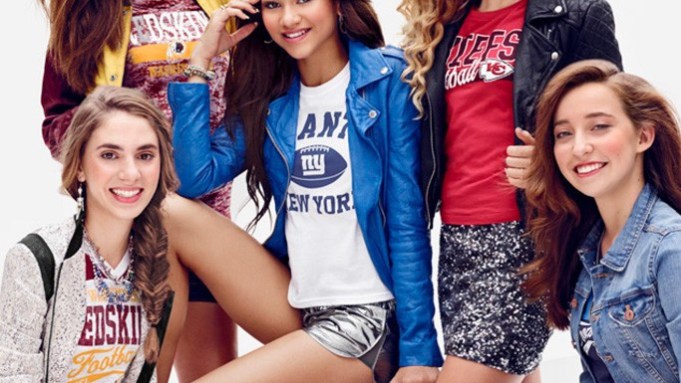 The NFL aims to close the gap between fashion and football in its back-to-school advertising campaign featuring teen actress Zendaya.

This is the first time a celebrity talent will be featured in a print campaign for the NFL Juniors line for tweens and teens.

Zendaya, who stars as Rocky Blue on the Disney Channel sitcom “Shake It Up,” will be featured in print ads in Seventeen and Girl’s Life magazines in September. The campaign also features Gracie Hunt — daughter of Kansas City Chiefs owner Clark Hunt — and Brittanie and Tiffanie Snyder, daughters of Washington Redskins owner Dan Snyder.

Produced under license by Outerstuff Ltd., styles include a variety of tops, T-shirts and hoodies. Suggested retail will average $22 to $65. Sizes will be XS to XL.

Zendaya, who turns 17 on Sunday, said she is a big football fan.

“As a lover of all things fashion and football, I like to combine both of these passions into my own style. It’s so easy to pair back-to-school looks with my favorite football team’s apparel for a modern twist on everyday chic,” said Zendaya.

Tracey Bleczinski, NFL’s vice president of consumer products, described  junior consumers as “very creative in the way they express themselves through fashion.”

A first-season wholesale sales projection was not available. But overall apparel spending among 13- to 18-year-old girls last year exceeded $25 billion, according to industry estimates.