Nicole Miller will feature Hungarian model Sophie Srej in a series of dramatic ads to debut this spring. 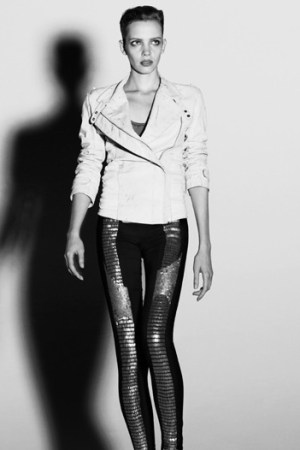 Nicole Miller has taken a new advertising direction for spring.

Cinematically shot in black-and-white by Robbie Fimmano, the designer’s spring ads center on Sophie Srej and little else. The series of dramatic shots feature the Hungarian model wearing metallic leggings, a form-fitting jumpsuit, bike shorts and a variety of other styles that might not be top-of-mind in a Nicole Miller word association game.

“I wanted to do a departure from the campaigns we had done in the past,” Miller said. “This has this strength and edginess to it, and I love the shadow behind her. It wasn’t shot on location. With everything that is going on in the world today — so much economic hardship and wars — I wanted to make sure I had their attention.”

Srej has garnered her own share of attention in recent days. She has been spotted this week on the runway at Chanel and Anne Valérie Hash, and she walked in Miller’s September runway show, which was part of the reason the designer plucked her to headline the new campaign. “All of a sudden Sophie has really taken off. I love getting a girl early on before she is discovered,” Miller said. “She has such an edgy, unusual look, and a really great attitude. I liked the fact that she was not smiley too.”

Vogue, W, Interview, V and WWD are among the titles that will carry the ads. Executives at Nicole Miller declined to comment on the media buy.

Serving as creative director for the campaign and working with stylist Laetitia de L’Escaille, Miller opted not to use color to stand out amidst other designer ads. Another unexpected twist is the multipage layouts open with a logo-free page, meant to relay a strong statement about design.

All too familiar with the fashion world’s fondness for typecasting, Miller said, “I’m known for the little black cocktail dress, right? We’ve moved on from that even though we do still sell a lot of dresses. There are certainly coats, sportswear and we sell a lot of pants, too. These photos showcase a lot of what I do on the runway that may not be what is stuck in some people’s minds.”