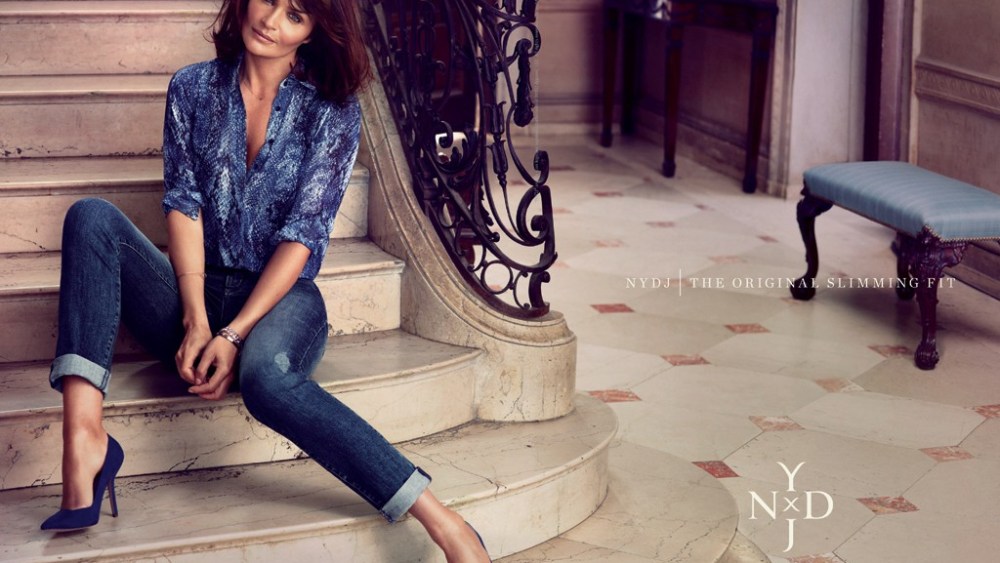 NYDJ, the powerhouse denim brand formerly known as Not Your Daughter’s Jeans, has tied in with model Helena Christensen to take the next step in its ongoing re-branding effort.

The Vernon, Calif.-based company, now identified as the largest women’s jeans brand in the department store channel by The NPD Group, has put the Danish-born model at the center of its fall marketing campaign, which will be the first to feature a known personality in its advertising as well as the first to include television advertising.

Shot by Alexi Lubomirski on location at Alder Manor in Yonkers, N.Y., the campaign, dubbed “Walk in Beauty” for the Lord Byron poem “She Walks in Beauty,” places the 44-year-old veteran of Victoria’s Secret in an historic setting as it showcases the brand’s growth from jeans-only to include tops, slacks and outerwear.

The print ads will drop with the September editions of Vogue, Harper’s Bazaar, InStyle, Elle, Real Simple and others, and the television commercials will begin airing on broadcast and cable TV on Sept. 9. Its e-commerce site at nydj.com will be modified to include the new creative approach on Aug. 1.

“The decision to test television media was based on driving awareness,” said Edwin Lewis, chairman and chief executive officer of the company, “and through our integrated TV, print and digital campaign, we’re generating well over 150 million impressions. Our goal is to stoke the loyalty and passion that exists among our current customers while introducing NYDJ to an entirely new customer who may not know us.”

The ceo declined to disclose the spend on the campaign, saying instead that it had increased its marketing expenditures “significantly.” With an estimated annual volume in excess of $200 million, a 5 percent allotment for marketing spend would provide a total budget of more than $10 million for the year. Toth + Co. serves as NYDJ’s creative agency.

Christensen has made news as an editorial and advertising model, as a designer, photographer and editor and as an activist for numerous causes. With its market share growth and use of “Lift Tuck Technology” to promote itself as “the original slimming fit jeans,” NYDJ has had the attention of its competitors for several years, carving out a niche in stretch jeans that generally retail for less than $100 at the lower end and rarely at more than $120 at the high.

In disclosing the introduction of its new line of Revel body-shaping jeans, Levi Strauss & Co. called out several points of differentiation — in construction and its generally younger target market — between itself and the Southern California brand.

Owned since 2008 by Falconhead Capital LLC, a New York-based private equity firm, NYDJ was founded in 2003 and has been something of an outlier as higher-priced, more tightly cut premium jeans have garnered much of the attention in the jeans market.

“We have established credibility as a brand that knows and honors women’s curves,” said Lewis, adding, “and in this campaign we wanted to play up the emotional reason why women choose NYDJ — because our combination of fit and fashion makes her feel beautiful, confident and sexy.”