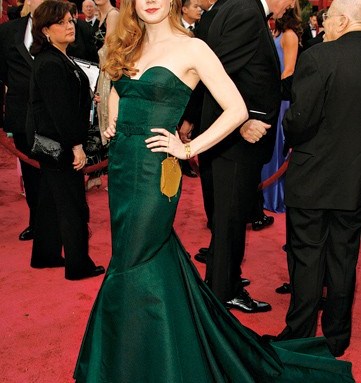 When it comes to creating beauty trends, the runway and the red carpet are as influential as they are unlike each other. The former thrives on risk taking, the latter on playing it safe. That dichotomy was heightened this year because of the calendar: the Academy Awards coincided timing-wise with the Fall 2008 ready-to-wear shows in Paris. While the two shared overarching key ideas, the execution was decidedly-and thrillingly-different.

Past Present
When Hollywood mines the past for inspiration, it doesn’t go far: Old Hollywood and its attendant finger waves and flawless makeup are de rigueur. Designers, however, channel more far-flung eras, be it the British Raj as at Alexander McQueen, the Swinging Sixties as at Dior or the Forties at Christian Lacroix. It’s a more theatrical approach to be sure, but one that fashion-forward red-carpet mavens—witness Heidi Klum—have already started adapting.

Red Hot
The red lip is as much a staple of the red carpet as the torqued-torso-shoulder-forward pose. This year was no exception, as  actresses like Anne Hathaway and Vanessa Paradis opted for a strong lip—and little else. Red is also a runway favorite, but designers give the shade a creative—rather than classic—twist. To wit: the super shiny, candy apple red lips combined with a strong eye at both Miu Miu and Viktor & Rolf. The execution may be extreme for every day, but the idea proves that some beauty maxims were made to be broken.

Get Shorty
At Yves Saint Laurent, designer Stefano Pilati mandated that all models sport black bowl-cut wigs obliterating their eyes. The idea was to “transcend literal notions of femininity,” wrote Pilati in his show notes. While he was the sole designer to emphasize a cropped top, Hollywood didn’t give the style short shrift. Once relegated to women d’une certain age, it’s now the very modern province of twentysomethings like Rihanna, thirtysomethings like Renée Zellweger, fortysomethings like Diane Lane and Sharon Stone, as well as the 50-plus crowd.

Less is More
Designers don’t hesitate to send models down the catwalk with only the barest hint of makeup (a swipe of mascara and a daub of blush at most) and minimally styled hair. But back in the real world, a top-notch actress wouldn’t dream of hitting the red carpet without spending some quality time prepping. Until this year, when best supporting actress winner Tilda Swinton accepted her award in all of her natural glory. Her one-shouldered Lanvin gown may have garnered jeers from the mainstream press, but Swinton’s fresh-faced bravery was a risk that worked.

Softly in the Night
Paris and Hollywood both know pretty has its place. Polished makeup and unfussy hair are perennial safe choices for the red carpet, where Jennifer Garner updated the look this year with a kittenish eye and softly waved side-parted hair that brushed her shoulders. In Paris, the news was in color and texture. Pink prevailed, subtly on the temple and inside corner of the eyes at Louis Vuitton, shimmering at Valentino. Soft powdery textures, as at Vuitton and Emanuel Ungaro, also gave a fresh twist on the classics.

Up and Away
In Hollywood, updo often means old school, and this year was no exception.Exhibits A and B: the slightly mumsy side sweeps of Hilary Swank and Nicole Kidman. In Paris, this season’s updos were more organic, less perfect. “You see the finger marks that pull the hair back,” said stylist Guido Palau of his tough-chic French twists at Lanvin. At Giambattista Valli and Givenchy,  wispy strands floated out of low-slung chignons. Explained Luigi Mureno, of the appealingly low-key look he created at Givenchy, “It has sensuality.”

Intense Eye
Heavily lined black eyes were one of the standout trends of the Paris collections. Looks ranged from extreme, as at Givenchy, where Aaron de May used various textures of black on an otherwise bare face, to more extreme, as at Balenciaga and Comme Des Garçons, where thick swathes of black were liberally applied on the upper lids.

Golden Accents
Gold provided a surprising—but low-key—accent for both hair and makeup. At Chanel, it was used liberally on the models’ eyelids, as well as painted on their hair to highlight an otherwise natural style. At Nina Ricci, Pat McGrath created a gold vertical streak above and below each model’s left eye and swathed lids with a combination of burgundy and gold, while at Dior, flashes were used to highlight hair. As different as each case was, the end result was the same: subtle and beautiful.