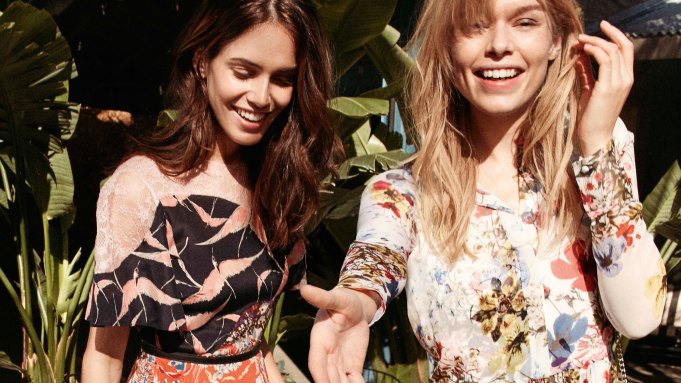 The video and print campaign, photographed by Riccardo Vimercati, was shot in various areas in Los Angeles. The campaign features Brazilian model Amanda Wellsh alongside Swedish model Kajsa Mohammer. They are pictured donning a slipdress, off-the-shoulder top and wide-leg pants from Emilio Pucci, Stella McCartney and Balmain. Elsewhere the models are shot wearing bohemian looks from Valentino and Erdem as well as bold eveningwear from Balmain, Christopher Kane and Proenza Schouler.

This is the first campaign, since the company revamped its brand identity last October. The campaign will run in the March issues of various publications including British Vogue, British Harper’s Bazaar and British Elle, which hits newsstands on Feb. 1. It will also be featured in print, digital, social media and direct marketing in the U.K., the U.S., France, Germany, Middle East, Singapore, Australia and Hong Kong.

“Following our brand identity refresh in late 2016, we are extremely pleased to unveil our new brand campaign creative,” said Andres Sosa, The Outnet.com’s executive vice president of sales, marketing and creative. “Having worked on this collaboratively in-house for the first time, combining the skill set of our fashion, creative and marketing teams. Mobile is becoming increasingly important for us — and our customer — and offering such a digitally relevant video concept will offer another exciting and engaging concept for our global consumer. We are also hugely excited to be showcasing this new creative in a highly visible outdoor format in Hong Kong, one of our key global markets, for the first time.”