Commercials featuring the "Nashville" actress will begin airing as 15- and 30-second spots on TV and select Internet outlets beginning Monday. 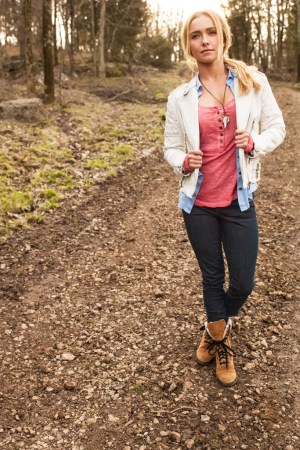 Since the 2009 relaunch of The Fabric Of Our Lives campaign from Cotton Incorporated, TV and Internet viewers have become accustomed to the signature closet-door framing device. The doors of the ninth commercial in the campaign open to reveal Panettiere as the latest face and voice to promote cotton’s role as a versatile textile fiber.

The new campaign has a budget of around $20 million, according to a Cotton Inc. spokesman. The commercials featuring Panettiere in various scenes — choosing an outfit in her walk-in closet, having fun at a nightclub, shopping at a shoe store, walking her dog — will begin airing as 15- and 30-second spots on TV and select Internet outlets beginning Monday.

“For this commercial we wanted a celebrity with an all-American, girl-next-door quality,” said Ric Hendee, senior vice president of consumer marketing for Cotton Inc. “Hayden had the look and the country cross-over sound we were looking for.”

Panettiere, star of the hit TV show “Nashville,” also sings the catchy “The Fabric of our Lives” theme song with a country twist in the commercial.

The criteria was strategic, building on the theme of the 2012 commercials, a celebration of American style that culminated in the second Cotton’s 24 Hour Runway Show in South Beach, Miami, in March.

“The commercial celebrates American style and American originals like country music, cotton denim and, of course, U.S. cotton growers, who are the number-one exporters of cotton to the global textile industry,” Hendee said.

Supporting the commercials are a series of related digital assets on the campaign Web site, thefabricofourlives.com. There, visitors can explore “Hayden’s Closet” to learn more about her style and to link directly to online retailers with comparable apparel at a range of price points. Within the closet environment is a new feature underscoring cotton’s appropriateness for any occasion.

Ten occasion-themed options, such as Day To Night, At The Office, Outdoor and Showstopper, present ensemble options and link to retailers selling the items. Related to this is another new feature in which a Cotton Inc. trend forecaster selects accessories options for the themed looks, and also directs the consumer to an online shopping venue.

The commercial and related digital components were conceived and executed by DDB New York, the agency of record for Cotton Inc., which, funded by U.S. cotton producers and importers of cotton and cotton textile products, conducts worldwide research and promotion activities to increase the demand for and profitability of cotton.