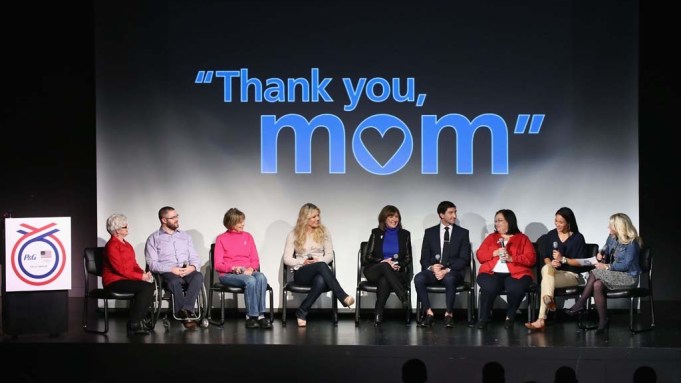 With 99 days until game time, P&G unveiled the “Sochi 2014 Thank You Mom” advertising campaign this week. The initiative, which salutes the role of mothers in raising Olympic athletes, will include a new film series called “Raising an Olympian,” which showcases the journeys of various athletes from their moms’ perspectives. The series will begin with four videos featuring alpine skier Lindsey Vonn, figure skater Evan Lysacek, ice hockey player Julie Chu and sled hockey player Taylor Lipsett. Six more spotlighting different athletes are due in the coming months. The U.S. series of 10 films is part of 28 films globally, which can be viewed via P&G’s YouTube channel.

“The compelling stories are what make the Olympics special and what gives it that power to unite the world in every way. And not every story ends with a gold medal or a climb on the podium. Some of them are stories of struggles,” Lysacek told WWD after an exclusive screening of the video series in New York Monday afternoon. “For us to be a part of this campaign that focuses on each of our individual stories has been incredibly inspiring. I know it will be for the viewers. We’d be nothing without our mothers and so for a company to give a nod to our moms is why every athlete in the games — all 357 of the winter athletes — are so fortunate to work with P&G.”

As part of the program, P&G will officially sponsor 20 Olympians and paralympians under brands like Olay, Pantene, Crest, Cover Girl and Gillette, and will also gift $1,000 Visa gift cards to all 357 U.S. moms to help them travel to Sochi.

“I think I can speak for all the moms that we are so touched and honored,” said Lysacek’s mom, Tanya. “It’s something everyone can relate to because we all have a mom. The campaign tugs at everyone’s heartstrings and I think that’s the beauty of the program.”

According to P&G executives, beginning in January the campaign will be utilized through social media channels as well as in more than 2,000 brick-and-mortar locations in the form of themed packaging, end caps and displays.

With all eyes on the upcoming games, which begin on Feb. 7, Lysacek, who won the gold medal in the 2010 winter games in Vancouver and hasn’t competed since, said achieving top marks comes down to preparation and focus, especially in figure skating. “It’s such an incredibly difficult sport and part of what makes it so hard is the margin for error is zero. You can’t make a mistake,” he said. “The tricks we are doing are not only extremely difficult, but extremely dangerous. I think people misunderstand figure skating a lot and it’s very easy to mock. Hey, I can recognize that. I mean the crazy outfits sometimes. The music is bizarre. It’s easy to see what makes it different from other sports, but what makes it the same as other sports is really what has drawn me to it.…In skating one of the first things you have to learn, because it happens so often, is if you fall down you have to get back up and at times that’s more difficult than others. If you start to go to that place in your head like, ‘it’s over, that was it, that gold medal’s gone’ it’s kind of dangerous. In skating that mental component is so crucial to success.”