A New Class of Potential Influencers Have Their Game Faces On

By Alexandra Pastore on December 9, 2019

By 2021, the online gaming industry is expected to reach $180 billion. And according to a recent report by WWD, the industry may hold great opportunity for luxury brands to reach consumers.

Louis Vuitton recently made exploration into e-sports with a two-year partnership with the popular multiplayer online video game “League of Legends.” The partnership was described as the first of its kind. As part of the collaboration, Louis Vuitton created champion skins for players’ avatars, a capsule ready-to-wear collection and a trophy travel case to hold the awarded Summoner’s Cup at the League of Legends Championship, ending last month in Paris. 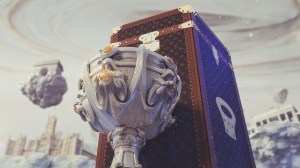 Louis Vuitton has made a trunk for the League of Legends World Championship Summoner’s Cup.  Courtesy

Similarly, Adidas entered a partnership with the gaming industry, recently announcing a partnership with the famed gamer Ninja. Ninja, whose real name is Richard Tyler Blevins, touts nearly 21 million followers across social media platforms, 22.3 million YouTube subscribers and has other sponsored partnerships with Red Bull and Uber Eats, among others.

A dedicated page on Adidas’ web site features a video where Ninja states, “partnering with Adidas is a chance to join a family that celebrates fellow creators at the top of their game. Those that choose to persevere through doubt, fear and uncertainty to chase their dreams. To all the creators that have come before and to all those that will follow, it’s time to clock in, punch that time card, and truly put the time in.” 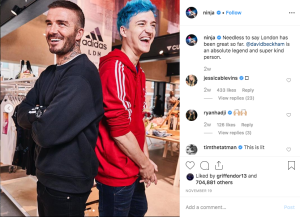 In an additional statement, Ninja said, “there’s never been a better time to blur the lines between the cultures of gaming and fashion.”

Puma, Nike and Champion also sell various products for e-sports. K-Swiss has created the “world’s first e-sports performance shoe” with MiBR, a global, professional e-sports organization. In a statement, Barney Waters, president of K-Swiss, likens the performance shoe to those offered to athletes of other sports, saying “for players to perform their best, they must look and feel their best. In the e-sports world, this is no exception as physical and psychological preparation breeds excellence in performance.”

PewDiePie, who holds the title for the most followed gamer with 102 million subscribers and sponsorships with brands such as Volvo, has created his own unisex clothing and homeware line, Tsuki, with his wife. According to Tsuki’s web site, the brand is “thoughtfully designed and ethically made.” Recently, Tsuki collaborated with Gelato Pique USA for a winter collection. 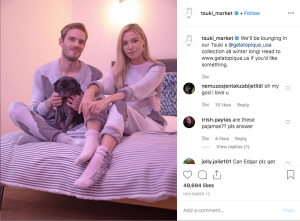 According to a report released by the China Internet Network Information Center, last December, the online gaming population in China totaled 484 million, representing a third of the population with women representing more than 58 percent of those players. And Laure de Carayon, founder and chief executive officer of China Connect, says in China gamers are already seen as influencers, telling a local Chinese newspaper that female players intent to buy game-related products is close to 46 percent, especially for aesthetic purposes.

WATCH: Why Short Suits Are the Coolest Spring 2020 Trend